OCTOBER has become a month of protests for Slovakia’s trade unions. The government’s austerity package, with its €1.7 billion in cuts and tax rises, has become the main target of the unions’ frustrations. The measures, which were designed by the cabinet of Iveta Radičová, are now being considered by MPs, who seem likely to modify some of the proposals. 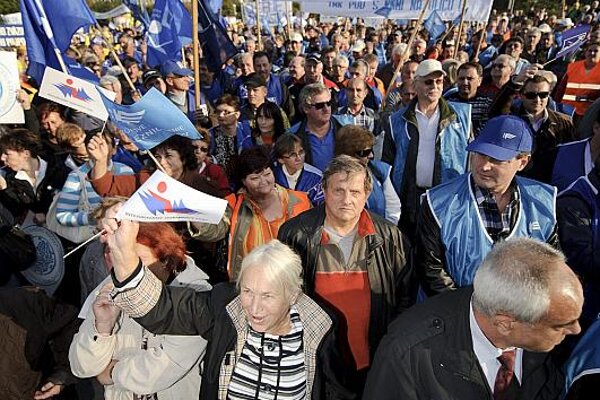 OCTOBER has become a month of protests for Slovakia’s trade unions. The government’s austerity package, with its €1.7 billion in cuts and tax rises, has become the main target of the unions’ frustrations. The measures, which were designed by the cabinet of Iveta Radičová, are now being considered by MPs, who seem likely to modify some of the proposals.

During the first two weeks of October unionists rallied against the package in Žilina and Košice. The protests culminated in a demonstration in Bratislava on October 12 which attracted more than 3,000 union members.

The Confederation of Trade Unions (KOZ) is demanding that the state does not tighten its belt at the expense of employees and the most vulnerable groups in society. The unions oppose the hike in value added tax (VAT) from 19 to 20 percent and are instead demanding differentiated VAT rates with, for example, lower ones for food products and a higher one for luxury products. The unions say the state should be more aggressive about curbing its own administrative expenses and changing some employment rules, KOZ spokesman Otto Ewiak told The Slovak Spectator.

KOZ is also against the increase in the excise tax rate on coal and natural gas, farmers’ loss of a tax bonus through their use of so-called red diesel, and government pension reforms.

One day before the Bratislava rally, Prime Minister Iveta Radičová met the union leaders and said they are entitled to express their stance through protests. However, she rejected the claim that her government is not interested in improving people’s living standards.

“We are taking all the measures with this goal in mind,” Radičová said, as quoted by the SITA newswire.

The opposition Smer party has supported the unions in their protest against what it called “the planned way of belt-tightening” and the Sme daily reported that former labour minister Viera Tomanová met the protesters, shaking their hands and hugging some of them. Smer’s Pavol Paška said that with the austerity package the ruling coalition wants to put Slovakia on its knees. KOZ endorsed Smer before the June parliamentary elections.

However, Speaker of Parliament Richard Sulík, leader of Freedom and Solidarity, one of the four parties which make up the governing coalition, argued that the unions are simply not very adept when it comes to economic issues.

“On one hand, they are against the increase in state revenues and they are also against the reduction of state expenses; but at the same time they want the deficit to drop,” Sulík said, as quoted by the TASR newswire. “This is trade union thinking in a nutshell.”

According to Sulík, the protest is theatre to benefit Smer and help the party to cover up its deeds over the past four years. He asked the unions where they were during the last parliamentary term, when Slovakia was losing billions under the Smer-led government.

“Why didn’t they protest when we were facing scandals worth billions – such as the bulletin-board tender, the electronic road-toll system tender or the emissions quotas sale?” Sulík asked. “Where were they back then?"

According to Ewiak, the protest rallies in Žilina and Košice were successful and citizens responded positively to the protests.

“This can be said of the Bratislava rally as well, where the approximately 4,000 unionists were joined by citizens, mostly of retirement age,” Ewiak told The Slovak Spectator. “The most important thing is that the demands of the trade unionists were registered by the government and by deputies of the Slovak Parliament.”

Ewiak interpreted the stand of the unions by saying that their goal was to request that MPs take decisions for the benefit of all citizens, making employment and social security Slovakia’s priorities.

“However, in Bratislava there were also people who were angry that due to the 30-minute blocking [of roads] due to the march by unionists they were not able to get home sooner in the surroundings of parliament and Palisády [i.e. Bratislava’s smartest neighbourhood],” Ewiak said.

According to Ewiak, further steps will depend on the course of parliamentary debate over the austerity package. If all the KOZ demands are ignored, the unionists are ready to continue their protests.

“As the highest representatives said, we do not exclude even sharper forms of protests allowed by the law,” Ewiak said, adding that KOZ president Miroslav Gazdík thinks that the best strike is one that does not take place, and thus further negotiations are expected with deputies and social partners.

Ewiak said that parliament should find savings that do not just burden citizens – but also affect capital.

“This is why we demand the creation of new jobs first of all for young people and investment into industry, the green economy and everything that might contribute to sustainable growth and dignified living standards,” Ewiak said.

The government on September 22 gave the go-ahead to rises in VAT and excise taxes, while abolishing several forms of income-tax relief beginning in 2011. It has also imposed cuts on its own operations in order to reduce state spending by €986 million next year: €154 million of the total is coming from reduced public-sector wages.

The government also produced a revision to the social security system, as part of an effort to trim Slovakia’s public finance deficit from this year’s 7.8 percent to 4.9 percent of GDP next year. The €1.7-billion austerity package will affect citizens across all segments of society, including state employees, pensioners, the self-employed, consumers and businesses, among others.

The government plans to increase budget revenues, and predicts that about €185 million will come from next year’s rise in the VAT rate. The government also approved rises in the excise taxes levied on beer, tobacco products, mineral oils, coal and natural gas.

However, by October 13 it was already clear that some of the measures could be modified. For example, beer producers have been protesting against the hike in excise tax and may succeed in having that increase softened.