MORE national records were broken in several rather curious disciplines in the front courtyard of the Polus City Center in Bratislava in September. 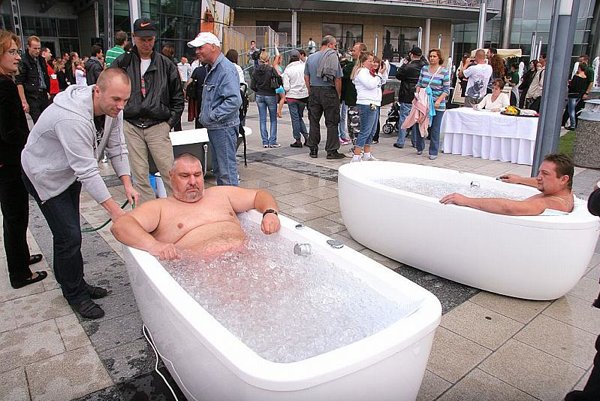 MORE national records were broken in several rather curious disciplines in the front courtyard of the Polus City Center in Bratislava in September.

One contest featured a battle for the fastest water-carrier and the other permitted spectators to guess how long two members of the Polar Bears (Ľadové medvede) club would be able to sit in bathtubs full of ice. Both competitions were held in cooperation with the Slovak Records Agency.

In the first contest participants had to carry 200 litres of water from one tub to another in the shortest possible time by using a 10-litre bucket. Anyone could enter this contest and earn a famed entry in the Book of Slovak Records by simply registering at the square in front of the shopping centre. A total of 13 people, all from Bratislava, were willing to compete in several age categories.

Perhaps the most interesting event, however, and certainly the chilliest, was a duel between two members of the Polar Bears club – Apa Tibor Birčák and Milan Žierik – which demonstrated their self-discipline and imperviousness to ice-cold water. Birčák was the reigning Slovak record holder as he had managed to sit for 75 minutes in ice water on New Year’s Eve 2008.

The event at Polus was an opportunity to break this record and Birčák improved his personal record by 2 minutes by sitting in the tub for 77 minutes. But his colleague Žierik triumphed in this belly-to-belly competition by staying submerged in the icy water for 85 minutes and setting the new Slovak record.