MOTHER Nature showed her nasty side to Slovakia in 2010. Two waves of flooding hit many regions of the country this year, causing the greatest amount of property damage witnessed in the last 20 years. Neither the rampaging flood waters nor the monetary losses faced by many farmers and property owners have generated a significant increase in the number of flood insurance policies but people living in flood risk areas may face higher insurance rates or an inability to purchase insurance in coming years. 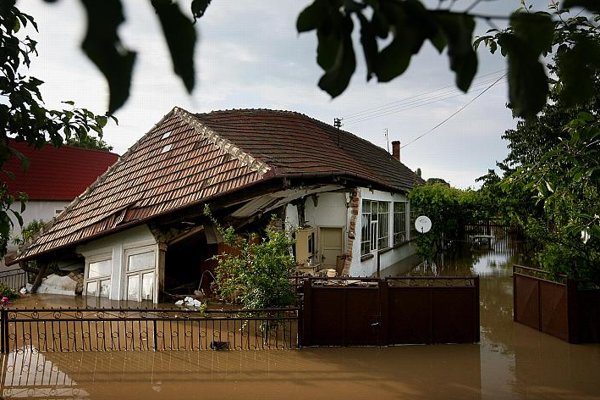 MOTHER Nature showed her nasty side to Slovakia in 2010. Two waves of flooding hit many regions of the country this year, causing the greatest amount of property damage witnessed in the last 20 years. Neither the rampaging flood waters nor the monetary losses faced by many farmers and property owners have generated a significant increase in the number of flood insurance policies but people living in flood risk areas may face higher insurance rates or an inability to purchase insurance in coming years.

For Slovakia’s largest insurer the number of claims linked with inclement weather such as from floods, storms, gales, and lanslides has exceeded 50,000 so far this year. Floods alone accounted for over 35,000 claims. Total damages in these claims reached €36 million for Allianz-Slovenská Poisťovňa.

Kooperativa Poisťovňa has received 7,159 flood claims from its customers, with damages estimated at about €26 million, according to Zuzana Wagnerová, the insurer’s spokesperson. Generali Slovensko has reported that its claims were the highest in 20 years because of this year’s floods.

“With regards to the first wave of floods, those in May and June, clients of Generali Slovensko filed 2,776 claims with aggregate damages of €6.73 million,” Zuzana Hliváková, the spokesperson for Generali Slovensko, told The Slovak Spectator. “Within the second [flood] wave in August, the insurer received 334 claims with estimated damages exceeding €640,000.”

The Ministry of Agriculture, Environment and Regional Development has calculated the first flood wave’s damages at over €414 million and after the losses from the summer floods are added, the sum will be considerably higher. The final amount will be known only sometime in November, the Pravda daily wrote.

Insurance companies also note the appearance of a phenomenon that had not been very common in past years – landslides.

The villages of Nižná Hutka, Nižná Myšľa and Kapušany, all in eastern Slovakia, are just three of multiple villages in which lanslides have endangered or already destroyed houses and community infrastructure.

While several insurance companies have reported a moderate increase in the number of flood insurance policies signed, or say they expect to see an upward trend, the Slovak Insurance Association (SLASPO) does not view any increase to be significant.

“It is impossible to say that the floods which hit Slovakia over recent years have had an ‘educational impact’ because this kind of insurance has been maintaining its same level,” Eva Jacková, the manager of non-life insurance at SLASPO told The Slovak Spectator. “I would also say that awareness is reduced by compensation coming from the state which is not systematic and is one-off and thus does not motivate owners of real estate to take care of their own property.”

Jacková said that since floods have become an almost annual phenomenon several insurance companies belonging to SLASPO have declared that they will re-assess their attitudes towards calculation of insurance rates.

“Compared with previous years when insurance companies stated that they would not take into consideration whether a locality was flooded or not in the past, this rhetoric has been significantly changing,” said Jacková.

According to Hliváková, Generali Slovensko is monitoring and analysing the situation and the results of these analyses and further developments will determine what approach it will take towards new insurance policies and premium rates.

“For the time being we are selling insurance policies in regions where floods have occurred,” said Hliváková. “Our clients are not facing higher premiums; only the co-insurance [factor] for flood risk insurance has been adjusted.”

Jacková commented that the question of whether existing insurance premium rates will be changed can only be answered over a period of years. But presumably changes will apply only to new insurance policies and only in high-risk regions as insurance companies may not unilaterally make premium changes to existing policies, except for automobile insurance policies covering third party liability.

Slovakia does not currently have an official flood risk map but it is obliged by an EU Directive on the Assessment and Management of Flood Risks to analyse the extent of flood-prone areas and risks to assets and citizens and to take adequate and coordinated measures to reduce these risks. This directive also reinforces the right of the public to access this information and to have a say in the planning process, the European Commission writes on its website. Slovakia must elaborate such a flood risk map by the end of 2013.

Some insurance companies have a flood risk map but this a commercial product, not a public document.

“Three of our member insurance companies have acquired a licence for flood risk mapping software from a commercial company,” said Jacková, adding that a flood map can help an insurance company decide whether to insure a particular piece of property and help determine how to set insurance rates more precisely and fairly.

After the wave of summer floods, the Interior Ministry submitted a proposal for preventive measures. The proposal would require the involvement of commercial insurance companies at two levels. The first level would establish a new levy that would be paid by commercial insurers to finance flood prevention measures. The proposal sets the levy at 8 percent of the total premiums paid for insurance covering immovable assets or damage to agricultural products. The proposal’s second level would oblige insurance companies to insure the assets of citizens who live in flood risk regions if they request such insurance, the SITA newswire wrote.

The inter-departmental review closed on October 18 and several parties have already raised objections to the proposal.

On October 8 the Slovak Insurance Association issued a press release in which it stated that the proposed levy is not appropriate because purchasing insurance for real estate or agricultural products is a voluntary decision.

SLASPO said that the ministry’s proposal would mean that “only those who are willing to secure themselves against a natural disaster or another catastrophe [through insurance] and do not bank on repayment of damages from the state would be affected by a hidden tax”.

The Finance Ministry offered a similar opinion, stating that it does not view the 8-percent levy to be fair to those who have purchased insurance policies, adding that the new levy may lead to price increases in insurance policies. The National Bank of Slovakia also offered objections, pointing out that the proposal may lead to making insurance less accessible because of higher premium rates, SITA wrote.

SLASPO has also objected to the proposal’s requirement that commercial insurers must insure property owners in higher risk regions if they apply for insurance. The association said this requirement is in absolute contravention to the basic rules of insurance across the whole world.

“We are surprised not only by the proposal as it is [written], but especially by the fact that nobody asked the insurance sector either for its stance or for its proposals with possible solutions before making the material public,” stated Jozefína Žáková, the general director of SLASPO, in a press release. “The proposal in this form might violate not only the financial stability of insurers but also afflict those Slovak citizens who behave in a responsible way towards themselves and their assets [by purchasing insurance] and would provide a certain advantage to those who have not closed any insurance policy.”