Hrebienok in the High Tatras

THE VERY first building erected at Hrebienok was the Szilágyi pavilion observatory. 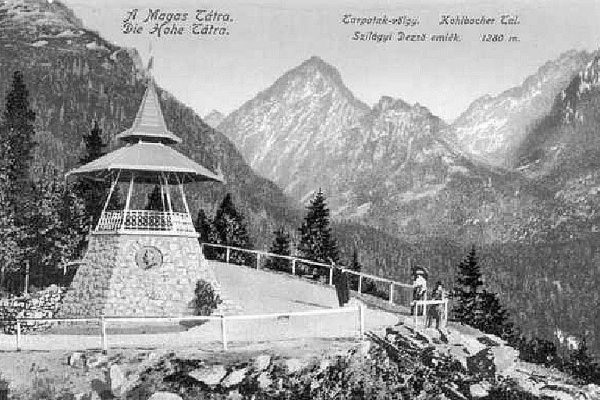 THE VERY first building erected at Hrebienok was the Szilágyi pavilion observatory.

Dezider Szilágyi was a Hungarian justice minister who liked to visit the High Tatras and played a part in promoting them. Thus, in 1904 a relief portraying the minister was placed on the lower part of the pavilion, which was built by Gedeon Majunke from Spišská Sobota.

Later, the pavilion became a sort of pantheon of personalities who had played a role in the development of the Tatras. Several commemorative plaques were attached to it.

Unfortunately, both the plaques and the relief decorated the pavilion only until World War II when they simply disappeared. It is not known precisely when this happened, nor, of course, who took them.

The pavilion still stands, although it is not easy to find, as it is now completely hidden by vegetation – a big change from when it used to stand on a treeless promontory.

We can still admire it in this old postcard dating from before World War I, when the relief of Szilágyi was clearly visible on its wall.