BRATISLAVA residents and visitors may have been pleasantly surprised to bump into the royal couple of Norway as they took an afternoon stroll around the city's old town on October 26. The leisurely sojourn was part of the official programme for the state visit by King Harald V and his wife, Queen Sonja, to Slovakia for three days at the end of October. 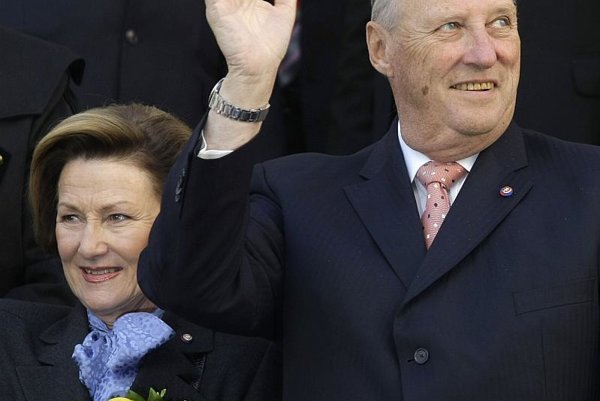 BRATISLAVA residents and visitors may have been pleasantly surprised to bump into the royal couple of Norway as they took an afternoon stroll around the city's old town on October 26. The leisurely sojourn was part of the official programme for the state visit by King Harald V and his wife, Queen Sonja, to Slovakia for three days at the end of October.

The royal couple arrived on the evening of October 25 and were hosted by Slovak President Ivan Gašparovič and his wife Silvia. The official programme included the traditional bilateral political meetings, conferences, cultural events, business-support activities and visits to cultural institutions, and took the royal couple to the towns of Banská Štiavnica and Žiar nad Hronom in central Slovakia in addition to their two days in Bratislava.

The Norwegian royal couple make two official foreign visits each year and this was their first trip to Slovakia.

The business end of the visit

King Harald told journalists after his first day in Bratislava that the character of his official state visits has changed compared to the past, when he was primarily engaged in ceremonial parts of the programme and was not always present for business and foreign policy-related discussions. But in Slovakia he had a full schedule of such meetings.

One such occasion was the opening of a conference about corporate responsibility entitled Modern Companies in a Modern Society, which the king attended on October 27.

“There are always things we can share and we are now finding that out in this discussion,” he said. “That is why we are here, that is why we have brought a big business delegation with us.” He added that about 70 people from the Norwegian business community accompanied the royal couple.

In addition to meeting Slovakia’s highest state officials, the Norwegian king and his delegation had a series of business and foreign policy dialogues. One of the highlights was the signing an agreement with Slovakia on use of funds from the European Economic Area (EEA) financial mechanism and the Norwegian financial mechanism. On October 26, Norwegian Foreign Minister Jonas Gahr Store and Slovak Prime Minister Iveta Radičová signed memoranda of understanding which established the priorities for grants in the 2009-2014 period, with total funding of €80.75 million. The funds will primarily be used for anti-flood measures, steps to prevent climate change (together €31 million) and for prevention of domestic violence, as well as for the general development of civil society in Slovakia.

“I am very pleased by the fact that Slovakia is the first of the 15 recipient countries to sign the memoranda of understanding,” Radičová said at the occasion. Foreign Minister Store said that the agreements are a great basis on which to strengthen relations between Slovakia and Norway.

Many of the projects which have been supported by grants from Norway in Slovakia are success stories and the royal couple had a chance to see at least some of these, such as the Gaudeamus hydrotherapy centre which Queen Sonja and Slovak first lady Silvia Gašparovičová visited on October 27. The newly-built facility, with modern swimming pools, was financed from Norwegian and EEA grants and is used by both disabled people and people without disabilities and is helping to break down barriers in the re-integration process.

On October 28, during their trip to central Slovakia, the royal couple visited the Slovak Mining Museum and the Old Castle in Banská Štiavnica as well as a mansion in Svätý Anton.

One of the highlights of the royal visitors’ cultural programme was the official opening of an exhibition at Bratislava Castle dedicated to Norwegian writer Bjornstjerne Bjornson, entitled Tribute to Bjornson. The exhibition was organised jointly by the Norwegian Library in Oslo and the Slovak National Library in Martin as a part of the commemoration of the 100th anniversary of the writer’s death.

Bjornson represents a link between Norway and Slovakia because he was very much engaged in the fight for Norway’s independence and for the freedom of other small and oppressed nations. The Slovak nationalist movement of the mid 19th century drew much inspiration from Bjornson’s ideas.

When speaking to journalists at the end of his first day in Slovakia, King Harald said that Bjornson was mentioned in all the conversations he had had during the day.

Inspiration for the future

“The purpose of the state visit is to provide the basis for further cooperation in many fields,” said Trine Skymoen, Norway's ambassador to Slovakia, during the royal visit. “And I think that all the people, including those on the cultural side, are now ready to continue working on the issues that have been started here. And of course there were the important memoranda of understanding signed today by which there was agreement on the use of the €80 million that Norway is going to grant to Slovakia and that is a very solid source of inspiration for all of us.”