CALLING George Soros a financial tycoon and one of the best-known contemporary economic thinkers would be only partially true since many of his important activities are linked with philanthropy. His philanthropic face was the one he mostly presented during his recent tour around Europe, including a stop in Bratislava in mid October. 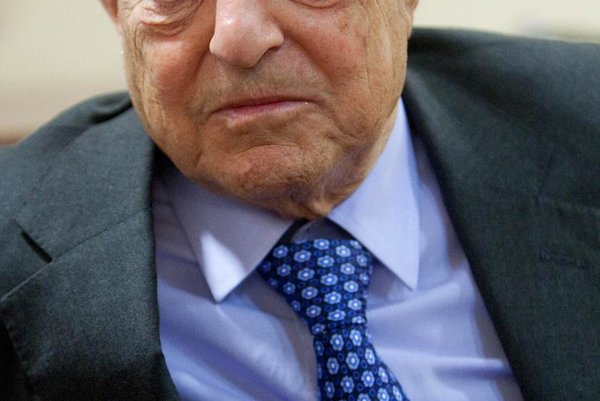 CALLING George Soros a financial tycoon and one of the best-known contemporary economic thinkers would be only partially true since many of his important activities are linked with philanthropy. His philanthropic face was the one he mostly presented during his recent tour around Europe, including a stop in Bratislava in mid October.

The Open Society Foundation (OSF), part of Soros’ network of foundations, focuses primarily on the problems of Roma living in central and eastern Europe. In Slovakia, Soros not only met people working for the Slovak branch of OSF and several government officials but also sought out ideas and comments from people who are working with Roma in their communities.

Talking to the government

Soros met Rudolf Chmel, Slovakia’s deputy prime minister for national minorities and human rights, to discuss Roma problems in Europe and particularly how these issues and problems are being handled in Slovakia.

Chmel informed Soros about the policy ideas and legislative steps the current government is planning to implement in the near future to solve some of the problems faced by the Roma minority living in Slovakia.

Soros stressed during his presentations here that the recent deportations of Roma from France have focused the attention of the whole continent on problems faced by Roma across Europe and that this present awareness should be used as an opportunity to develop better solutions.

“We need a common European Roma strategy,” said Soros, who was born 80 years ago in Hungary and later emigrated to the UK and then on to the US.

Soros declared his intention to restore good relations with the Slovak government and to cooperate more intensively on Roma issues. He said that the process of social integration should be started in early childhood.

Soros touched upon the sensitive topic of boarding schools for Roma children, an idea that many defenders of Roma rights vehemently criticise. Soros told the media after his meeting with Chmel that he believes boarding schools are a bad idea for the youngest children but could prove useful at the level of secondary schools and universities.

Soros, as the founder of the Open Society Foundation, spoke in Bratislava to a hall filled with representatives of Slovakia’s non-governmental sector. But he said he came to listen as much as to speak and his aim was to draw inspiration for projects that could be undertaken by his foundations in the region.

“I used to be familiar with the situation in Slovakia, but I am not up-to-date now, so I would like to find out from you where we stand in Slovakia,” he said to the NGO representatives who then had the opportunity to speak about what they found restrictive, difficult or missing in their everyday work.

The discussion was started off by three keynote speakers: Anton Marcinčin, the author of a study entitled The Cost of Non-Inclusion who is currently an MP for the Christian Democratic Movement (KDH); Janette Maziniová, project manager for Roma education and inclusion at Iuventa, the Slovak Youth Institute; and Marek Hojsík, the general director of the Social Development Fund.

Marcinčin pointed out that international experience in development aid should serve as a source of knowledge for people in Slovakia who deal with Roma problems.

“A coordinated approach is cheaper and more effective than just throwing money at people, especially if a large part of the money disappears on the way to them,” Marcinčin said.

He stressed that the key is in education policies and noted that in Slovakia there are officially more mentally disabled Roma children than non-Roma children, even though Roma make up only about 7 percent of the country's total population.


Many Roma children end up in special schools even though they have no learning problems, he said.

“What do these kids do once they finish their special education? Are they welcome in the labour market?” asked Marcinčin.

Maziniová agreed that there is a need for a coordinated youth policy at the European level since over 50 percent of Roma living in Europe are younger than 18 and their potential is untapped.

“What remains a challenge is that we shouldn’t understand inclusion as an activity, since every activity that carries the word inclusion in its name is rather positive discrimination and that is not very good for us,” Maziniová said. “Let us try to perceive inclusion as an approach, because that is how we can open possibilities and space for young people to use the potential they have.”

Hojsík, whose work mostly involves drawing financial resources from EU funds, said that the problems facing Roma are becoming more visible in Europe these days and Roma are gradually coming to be seen as a European priority.

“But this process is also dangerous in that the member states strongly tend to try to get rid of responsibility for solving inclusion of Roma and they want to shift the responsibility to the EU,” Hojsík said.

Soros agreed Europe can make funds available but that the work has to be done mainly at the level of member states. He said that funded Roma programmes need to be consistent and continuous at the European level.

“And I hope that we will be able to bring about that change. But that’s only one step to better results,” he said. “Then the work needs to be carried out in Slovakia to make use of those funds.”

Soros said that social inclusion starts with taking care of a pregnant mother, then checking the baby’s health, and then following through at school, because Roma children often don’t get proper support from within their own homes.

“I don’t know the situation in Slovakia in regards to positive discrimination,” he added.

“I understand that some programmes have been found unconstitutional because of positive discrimination. In my opinion providing children with opportunities – and those children who don’t have support at home need to be provided with that support from mentoring they can get at school – is not positive discrimination, but equalling opportunities. If that is the problem in Slovakia, it needs to be challenged on constitutional grounds.”