No solution in sight for Roma settlement

THE ROMA settlement in the western Slovak village of Plavecký Štvrtok has been living under threat of demolition for several months now. But despite the obvious interest of politicians in the matter, a solution for the problems associated with the community remains elusive. 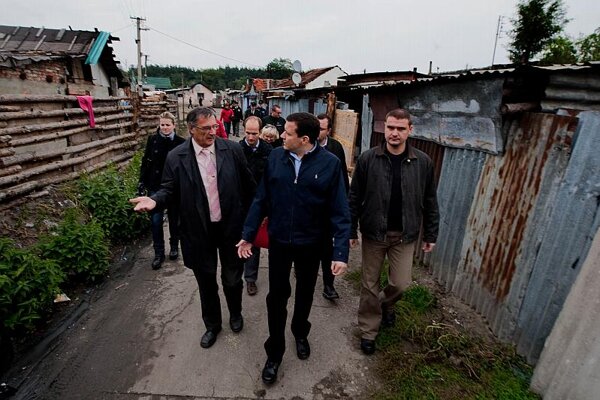 THE ROMA settlement in the western Slovak village of Plavecký Štvrtok has been living under threat of demolition for several months now. But despite the obvious interest of politicians in the matter, a solution for the problems associated with the community remains elusive.

The number of illegal houses in the village has mushroomed over the years. Today, Plavecký Štvrtok is the biggest Roma settlement in western Slovakia, home to some 600 people residing in about 90 houses, all of them built without construction permits on land belonging to the Slovak Land Fund (SPF), the mayor of the village, Ivan Slezák, told The Slovak Spectator. In addition, 18 of the houses have been built directly above an underground gas pipeline – a restricted area where, in theory, no buildings at all are permitted.

The government’s plenipotentiary for Roma communities, Miroslav Pollák, recently became involved in the matter and held a meeting with Mayor Slezák on October 26.

“Several steps must be part of the solution, because the problem is complex and it cannot be solved through only one aspect,” Pollák said following the meeting. “We have agreed to cooperate together in the future, also with other players such as the gas utility and other offices.”

However, the declared intention to cooperate is so far the only achievement of the two actors, who are working together for the first time to solve the issue. Pollák has been in office since the government changed three months ago, while Slezák has been mayor of Plavecký Štvrtok for two years and is standing for re-election on November 27. He faces a single challenger.

Since he took office, Slezák has pursued the solution that he and his municipal council chose: demolition of the illegally built houses using a procedure authorised by Slovakia’s Construction Act, starting with the 18 houses in the restricted area above the gas pipeline.

“Speaking frankly, we realise that in the long run it is impossible to defend them [the houses] and to keep them there illegally,” Pollák said. “But the subsequent steps are of more concern to us, because it is one thing to remove a house and another thing what happens to the [former residents] the next day.”

Pollák noted that the Construction Act cannot be given priority over other laws such as the child protection law. He said that the Interior Ministry had confirmed that demolition would not be possible in the near future, and that the 18 houses in the restricted area would not be removed for at least the next six months, so that the present residents are not left outside in the cold during winter.

The situation in Plavecký Štvrtok has risen to political prominence before, particularly in the run up to the general election in June this year. The settlement made news again recently, when Interior Minister Daniel Lipšic visited on October 19 to look into the problems of the Roma community there. He said that as of December 2010 the local police department would be given a new priority: to focus on reducing criminality in the settlement. He also promised to help the mayor demolish the illegal houses.

“It’s not acceptable in the long run for anyone in Slovakia to be able to violate laws continuously and to build houses in protected gas-pipeline areas as well other reservations,” Lipšic said, as quoted by the SITA newswire.

However, Pollák, the government’s proxy, says that demolition cannot occur before substitute housing is secured for the families. Mayor Slezák, on the other hand, maintains that there are no lots in the cadastre of Plavecký Štvrtok that could be used for such purposes, adding that the village also lacks the financial resources to build low-cost houses, even if they are funded by government programmes.

“The truth is that a lot of resources need to be put together by the village, such as for the infrastructure,” Slezák said. “And then it is a burden for the village to run such houses. The maintenance of those houses, and getting them [i.e. Roma residents] to pay the rent, could be problematic. We have a problem today to get the citizens who live in the settlement to pay for water. I cannot understand why they cannot pay for the main commodity they need for life if they obviously have satellite dishes, cars and so on. The village sees it as an immense burden that it cannot bear.”

Pollák reiterated that this was only the first of many meetings to come and added that he believes all those involved will reach a solution that will suit everyone.