THE LEADER of the Smer party, Robert Fico, greeted the re-election of Mikuláš Dzurinda as the chair of the Slovak Democratic and Christian Union (SDKÚ) in his own particular way: Fico played for a news conference an audio disc that contained recorded telephone conversations that he says proves Dzurinda had covered up corrupt practices in the late 1990s. Dzurinda responded that there were no new revelations in what Fico had released and that the Smer boss was acting like an “insulted and rejected bride”. 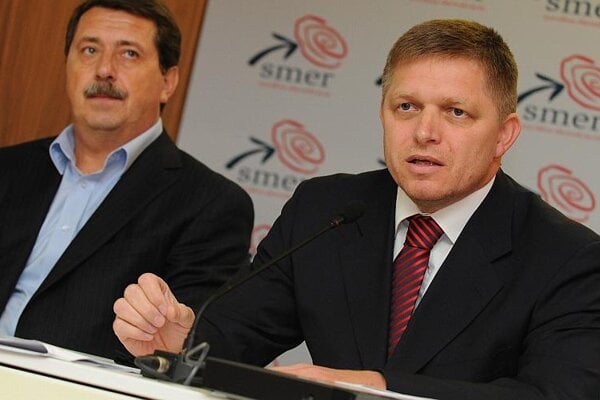 THE LEADER of the Smer party, Robert Fico, greeted the re-election of Mikuláš Dzurinda as the chair of the Slovak Democratic and Christian Union (SDKÚ) in his own particular way: Fico played for a news conference an audio disc that contained recorded telephone conversations that he says proves Dzurinda had covered up corrupt practices in the late 1990s. Dzurinda responded that there were no new revelations in what Fico had released and that the Smer boss was acting like an “insulted and rejected bride”.

Former prime minister Fico played the recordings the day after an SDKÚ congress had re-elected Dzurinda for a four-year term (see story on pg 3). Fico said that someone had brought an envelope with a disc to the headquarters of Smer and “we played it during the night and were very surprised to hear what was on it”.

The telephone conversations recorded on the disc did not surprise everyone, however, as parts of the conversations had been published before. The recordings were initially given to the police in 1999 by Marián Kardoš, then a spokesman for the Movement for a Democratic Slovakia (HZDS).

At that time the police did not initiate criminal proceedings against Dzurinda and instead investigated how the recordings had been obtained and whether they were based on illegal phone taps that could have violated personal privacy. It has been reported that the police did not investigate the actual content of the phone conversations.

“The story is very simple,” Fico said at the news conference. “Mr. Miškovský is organising a big deal for supplies of boilers for the Bratislava incineration plant and he is doing it through the Siemens company. He needs to arrange it with the Bratislava mayor, Mr. Kresánek. Then Mr. Vavrík steps in, who according to Mr. Miškovský is asking for money as a bribe for this deal and the whole deal is covered up by Mr. Dzurinda who confirms that he would take care of that and everything will be all right.”

Dzurinda said that all the conversations on the recording concern procrastination at Bratislava’s municipal office. Fico also hypothesised that someone had delivered the recording to Smer’s headquarters because Dzurinda had spoken in very harsh terms about Smer at the SDKÚ congress, the SITA newswire wrote.

“I do not know what further to do with it,” said Fico. “I will not go with the recording to the police. Prosecution bodies must act ex officio if they are convinced that a crime was committed.”

However, the SDKÚ said that it will sue Fico for his statements when he publicised the conversations on the disc.

Smer, and Fico personally, have taken such an approach towards political figures or other political parties in the past when allegations were pinned on them, said Grigorij Mesežnikov, president of the Institute for Public Affairs, adding that the issue might have been discussed behind the scenes at first, before the supposedly compromising information was later released.

“They are testing possibilities which they consider advantageous [for Smer] and if the potential partners do not accept it, then they punish them for it,” Mesežnikov told The Slovak Spectator, adding that “they have done it several times”.

Dzurinda told public-service Slovak Television (STV) that Fico had been transmitting signals that he would like to be friendlier with SDKÚ and that Fico had personally called him and offered to meet. Dzurinda said he had rejected the advances.

Mesežnikov said that he is not surprised that Fico first offered some deal to Dzurinda and when Dzurinda did not accept it Fico then started “attacking in a way typical for him”.

Mesežnikov stated that he believes that it was some kind of revenge on Fico’s part, adding that he does not think that there will be any strong impact from the release of the recordings.

“If he had come with something new, then perhaps. But he essentially revealed something that had been disclosed long ago, which from the penal and legal aspect is very weak,” said Mesežnikov. “In terms of politics it has a compromising effect, but in legal terms it almost equals zero because it is a recording in which Dzurinda admits nothing [illegal].”

Politically, however, the release of the recordings has the potential to damage SDKÚ’s reputation and it can be very unpleasant for the party, Mesežnikov said, while adding that if Fico’s intention was to incriminate the SDKÚ, Fico has failed.

Mesežnikov told The Slovak Spectator that he thinks the information in the recordings is not very useful to criminal investigators because the three individuals do not talk about any specific illegal acts and this makes it impossible for them to be linked to criminal activities for which they could be prosecuted.

“The way I see it is that it will again slip into oblivion,” Mesežnikov said.

Political scientist Juraj Marušiak said that Dzurinda consolidated his position within the SDKÚ at the party’s congress and that release of the recordings, which Fico claimed hints at Dzurinda concealing corruption, will cause no damage to the SDKÚ leader.

“SDKÚ led by Dzurinda – who can be compromised by several cases from the past – suits Fico much better,” Marušiak told The Slovak Spectator. “He is an easier target. On the other hand, Fico failed in his attempt to get closer with the Dzurinda wing [of the party] through the election of the general prosecutor.”

Marušiak also does not expect that release of the recordings will weaken the SDKÚ, given that the conversations are from the relatively distant past and society has had rather listless responses to other questionable practices of political parties.

But Marušiak hedged his position somewhat by adding that this could change “if after this recording some other recordings follow”.

On November 7 Fico also stated that Dzurinda should not call Smer a gang of “corrupt communists” saying that his party has never been involved in any cases of this kind.

But Fico does have his own problem regarding a recording released in the media. Shortly before the 2010 parliamentary election, the Sme daily received and published an audio recording featuring a voice sounding like Fico. The conversation on the recording implied that Smer might have accepted campaign contributions from sponsors that were not properly recorded in the party’s financial accounts. On the day that Sme posted the recording on its website, Fico said that he would sue Sme’s editor-in-chief, claiming that the newspaper was running an “anti-campaign”.

Interior Minister Daniel Lipšic, who in May 2010 was an MP from the Christian Democratic Movement (KDH), confirmed that he also had a copy of that recording and had given it to the General Prosecutor’s Office, asking that it be added to a criminal complaint that KDH had previously filed against Smer alleging lawbreaking related to the party’s financing.

At the time Fico called the recording nonsense and a fake, stating “I can produce as many of such recordings as I want”.

Fico stated that publication of the recording by Sme was part of a campaign by the media against his Smer party and government. At a hastily arranged press conference, Fico used vulgar language to criticise journalists for posting the recording. “Now you all will be jerking off about it; I wish you a pleasant sexual experience,” he said.

Mesežnikov, however, sees a significant difference between the recording featuring Dzurinda and the recording purportedly involving Fico, because in the latter the voice that is similar to Fico’s actually admits to having engaged in possibly illegal acts.