SDKÚ keeps Dzurinda at the helm

LESS than six months after the parliamentary election, as required by its party statute, the Slovak Democratic and Christian Union (SDKÚ) held its congress on November 6 to discuss the future of the party and decide who will lead it for the rest of the current parliamentary term. The congress brought no surprises: delegates confirmed the founder of the party and the only candidate, Mikuláš Dzurinda, in his position as chairman. 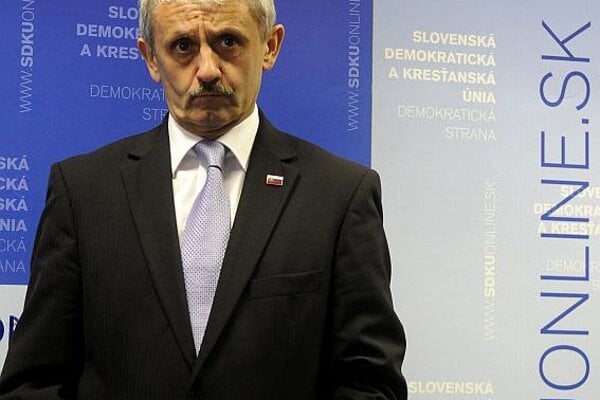 LESS than six months after the parliamentary election, as required by its party statute, the Slovak Democratic and Christian Union (SDKÚ) held its congress on November 6 to discuss the future of the party and decide who will lead it for the rest of the current parliamentary term. The congress brought no surprises: delegates confirmed the founder of the party and the only candidate, Mikuláš Dzurinda, in his position as chairman.

The congress marked 10 years of the existence of SDKÚ, which emerged as a successor of the Slovak Democratic Coalition (SDK), a party which was created before the 1998 elections and whose members were leading personalities from different right-of-centre parties united by the fight against the government of Vladimír Mečiar.

On November 6 delegates elected the leadership of the party for the next four years. Dzurinda, the only chairman of the party so far, had no challenger in the election and was confirmed as head of the party. Delegates also elected four deputy chairpersons: Iveta Radičová, Ivan Mikloš, Milan Hort and Lucia Žitňanská.

According to political analyst Grigorij Mesežnikov, the president of the Institute for Public Affairs, the absence of challengers to Dzurinda is the result of previous developments within SDKÚ.

“The party emerged as a project of Mikuláš Dzurinda, and it’s actually a result of some movements on the centre-right side of the political spectrum which were characterised by Mikuláš Dzurinda in the times of the SDK,” Mesežnikov told The Slovak Spectator, adding that Dzurinda was indeed a leader of the integration of some centre-right parties in the past and SDKÚ was built in line with his ideas, he played a leading role in choosing its personnel, and it was he who managed to build a strong position for the party.

Juraj Marušiak of the Institute of Political Sciences of the Slovak Academy of Sciences by contrast believes that there is a stalemate situation within the SDKÚ, with Dzurinda on the one hand as a leader who cannot really bring anything new, and on the other his potential opponents who cannot persuade other members of the party of their advantages. According to Marušiak, potential young leaders include Lucia Žitňanská, Miroslav Beblavý and Martin Fedor, but they do not seem to be getting enough space in the party.

“If [the party] managed to change the chairperson, it would be a positive signal that it is a party based on programme principles and not on personnel-cronyist connections,” Marušiak told The Slovak Spectator, adding that the exchange would serve as a positive signal to voters who gave their vote to the party led by Radičová in the national elections.

“Dzurinda didn’t even run as a candidate in the elections, so he did not pass the test of voter support,” Marušiak added.

Mesežnikov, on the contrary, believes that there has been no real pressure from the public for a change, since there is a fairly high level of acceptance of Dzurinda as the party chairman among SDKÚ voters. According to him, the argument that changing its chairman would help the SDKÚ politically is not very realistic, because the right has already strengthened a great deal recently, and in an unprecedented way.

“The right has received more support than ever before and thus the SDKÚ’s scope for winning new voters is rather limited,” Mesežnikov said.

Integration of the right in sight?

The leadership elections were accompanied by the approval of a programme for the party for the next four years, the General Line of the SDKÚ for 2010-2014, in which the party sets out its aims, philosophy and future plans.

The General Line is based on the election success of the SDKÚ in 2010, which enabled the party to form a government with other right-of-centre parties and push the top vote-winner, Robert Fico’s Smer, into opposition. In the document SDKÚ rules out any possibility of future cooperation with Smer and identifies Fico’s party as its main opponent and competitor on the Slovak political scene.

In relation to future elections, the SDKÚ looks to 2014, a so-called super-election year (since Slovakia will then hold elections for the presidency, the European Parliament and the national parliament), as the highlight. The SDKÚ resolved to present its own presidential candidate “who would have a real chance to become the president of the Slovak Republic”.

SDKÚ leaders also stressed their determination to be the leading force in the integration of the political right in Slovakia, in light of the fact that with Mečiar’s HZDS now out of parliament the era of ‘Mečiarism’ has definitely come to an end and the political spectrum is now divided along a left-right axis.

“While the left side of the political spectrum is dominated by one strong subject, the right side has been fragmented for many years, which often hinders the right’s ability to act,” the General Line of SDKÚ states. The SDKÚ says there will be a need in the future to integrate the Slovak centre-right parties into one, or at most two, political parties in order to maintain the stability of the right – and it hands itself the role of integrating force.

Mesežnikov explained that this is a way for the SDKÚ to profile itself as the strongest among the parties with which it cooperates – but he cast doubt on its chances of success.

“On the right-of-centre side of the political spectrum the situation is significantly different [compared to the left] and no integration is possible, due to ideological differences,” Mesežnikov said, adding that there is no realistic way for a liberal party such as Freedom and Solidarity (SaS) to merge with the conservative Christian Democratic Movement (KDH).

Mesežnikov also disagreed with the SDKÚ’s claim that integration would be necessary from the viewpoint of the right-wing parties, as he said it was enough for them that they had overall support sufficient to outweigh the left.

“That is exactly what is currently happening in Slovakia,” Mesežnikov said, adding that the problem of the right is not high fragmentation but rather an inability to cooperate.