SLOVAKS are becoming increasingly used to accessing the internet via their mobile phones. This is because of widespread, and growing, mobile internet coverage, falling prices, and the increasing number of applications and websites adapted for mobile internet access. 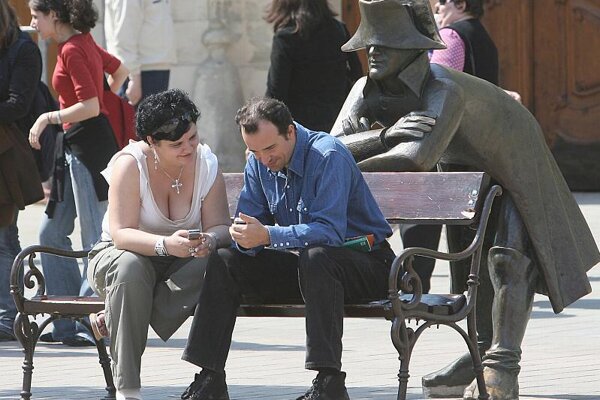 SLOVAKS are becoming increasingly used to accessing the internet via their mobile phones. This is because of widespread, and growing, mobile internet coverage, falling prices, and the increasing number of applications and websites adapted for mobile internet access.

In general, mobile operators do not consider internet services offered via mobile phones to be in competition with fixed-line services because, they say, the latter offer clients completely different opportunities and fulfil different needs focused primarily on ‘anywhere, anytime’ usage.

“The advantage of the mobile internet is its mobility and wide coverage,” Filip Hanker, an expert in mobile telephony, told The Slovak Spectator, adding that greater instability is a disadvantage. Connections may suffer short-terms breaks and problems can also occur in coverage.

But based on statistics from two mobile operators that have published figures, and official audits of mobile internet usage, such services are increasingly popular, according to Hanker. He ascribes this growth in usage to better mobile services, the general trend towards greater use of the internet via all forms of connection, and especially to drops in the prices charged by operators for data services.

“Operators are aware that the prices of voice services will only decrease and that the mobile internet is one of their few opportunities to increase revenues,” he said. “The price for basic access to the internet has been rising slowly. But prices for packages with fixed volumes of data have fallen significantly over the last few years and operators have already started offering packages which make watching TV via a mobile phone or using social networks even more attractive.”

According to Hanker, Slovak websites now often have mobile versions or versions for specific devices such as smartphones, and hence more and more people are using this form of internet access. Moreover, mobile phones with integrated internet services now offer more advanced computing ability and connectivity, allowing users to install and run more advanced applications and make more use of the internet via their mobiles. Such sophisticated devices now allow users to watch TV, access and update social networks, browse the internet significantly more easily than in the past, and access a number of functions which were until recently restricted to computers.

Slovakia is covered with quality networks, according to Hanker.

“Orange and T-Mobile cover at least 70 percent of the population with a high-speed network,” said Hanker. “This is the standard in western Europe, but not in many other European countries. Slovakia is not a leader in this field within the EU, because some countries have already launched much faster networks, but we have quality coverage at sufficient speeds.”

Slovak Telekom, which merged with T-Mobile in July, retaining the T-Mobile brand for its mobile services, does not reveal its exact number of mobile internet users, but it offers GPRS (general packet radio service) mobile internet everywhere that its voice services are available. It says that up to 99 percent of the Slovak population can therefore use it. Other technologies for accessing the internet via mobile phone include EDGE (enhanced data rates for GSM evolution), 3rd-generation HSDPA and F-OFDM (flash orthogonal frequency division multiplexing).

“LTE (long term evolution) technology is unambiguously the future in the field of mobile access to the internet,” Andrej Gargulák, the spokesperson of Slovak Telekom, told The Slovak Spectator. “This technology will increase transfer speeds by several times compared with current 3G or F-OFDM standards. The Deutsche Telekom group [Slovak Telekom’s parent company] and T-Mobile have rich experience testing the LTE network and the download speed in a normal environment exceeds 130 Mbps.”

For the time being Telefónica O2 Slovakia is focusing on offering mobile internet services while increasing the attractiveness of internet applications and the penetration of usable mobile phones, not only smartphones, so that the popularity and usage of these services among its clients grows.

“To compare, within Telefónica O2 Europe we have, along with Ireland, registered the fastest increase in the usage of mobile data services last year and this trend is continuing,” René Parák, Telefónica O2 Slovakia’s spokesperson, told The Slovak Spectator.

O2 mobile internet provides internet services on the basis of EDGE and GPRS technologies, while in May next year it plans to launch commercial operations of its third-generation network with coverage of as much as 33 percent of the population. O2 says it will continue to focus on internet mobile services.

“We do not consider internet services via mobile phone to be in competition with internet via fixed lines because the mobile internet offers clients completely different possibilities and fulfils different needs focused primarily on the possibility of usage everywhere and at any time,” said Parák.

According to Gargulák of Slovak Telekom, the arrival of new technologies means mobile connections’ former handicap in terms of transfer speeds or ‘ping’ speeds has begun to disappear and mobile solutions are catching up with fixed-line connections in these areas.

Data services on the rise

Slovak Telekom expects data services to play an increasing role in the services offered by mobile operators and is extending the coverage and capacity of its HSDPA (3G) network in all regions of Slovakia.

“Extension of broadband access at the 3G level is our priority for the coming years,” Gargulák said. “But at question is not only investment in networks. Our portfolio of services is also changing and growing. Through this we are flexibly responding to the constantly changing requirements of clients.”

Earlier this year Slovak Telekom launched a new prepaid mobile internet service and for Christmas it has introduced, for the first time, flat-rate mobile internet.

“We believe that mobile internet will play a growing, key role in the business of mobile operators,” said Gargulák. “We are witnessing, in the long term, a significant annual increase in the volumes of data transferred, assisted significantly by the availability and popularity of smartphones and tablets.”

Parák of O2 agrees, saying that this field is becoming an inseparable part of the needs of mobile clients.

“In line with the global trend we expect a further increase in the penetration of intelligent mobile devices and thus also usage of the mobile internet in terms of not only the number of clients but also the average amount of data transferred,” said Parák. “Thus it is possible to expect that providers will focus, apart from extending the range of products they offer, on the quality of services and the capacity of networks.”