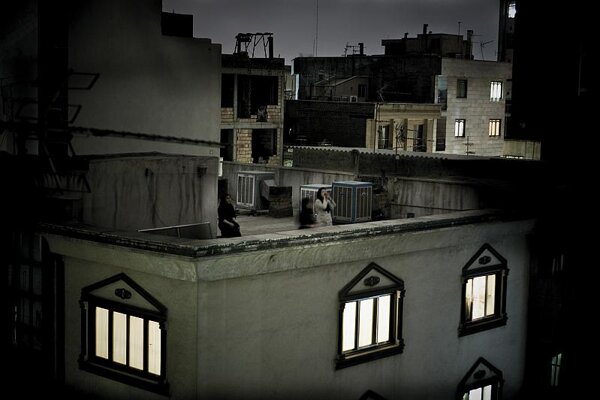 The WPP Photo of the Year by Pietro Masturzo. (Source: Courtesy of SEDF)
Font size:A-|A+

A long list of famous names in photography, such as Annie Leibovitz, Duane Michals and Jozef Koudelka, have exhibited their photographs at the festival or attended it in person.

The festival celebrates its 20th birthday this November and for this anniversary edition the festival’s organisers have laid an even richer table. For this year’s photographic Bacchanalia they prepared delicatessen items, hors d’oeuvres and sweet desserts as well as the festival’s traditional main courses.

The Slovak Photography 1990-2010 exhibition is shown in the National Culture Centre under the name Nepokojné Médium. The English version of the title is Yeasty Medium.

“This is an exhibition with the ambition to show what in this medium is yeasty or restless,” Macek, who is one of the three curators of the exhibition, told The Slovak Spectator. “There are several levels of restlessness. One of them stems from the entry of digital photography. More or less 10 years ago digital photography cornered amateur photography but these photos were very trivial with all those adjustments done by Photoshop and the potential of digital photography was not yet reached. Now it seems to us that this new technology has brought results.”

Another restlessness which Macek said has been here since the 1980s and 1990s lies in what photography is, whether it is a work of art and what its limits are. He said the third level of restlessness is in the searching of the young, which is very peculiar in being visually appealing and spectacular but he added there is always some kind of diversion.

“It is in some way treated with irony and as if morbid,” said Macek. “It is something that shows some emotional restlessness of the young generation.”

In total there are images from about 50 Slovak photographers living either in Slovakia or abroad.

The photographic history series of the region consists of three exhibitions. The first of them, called From the Photographic Archive, presents about 40 images from the last creative period of Czech photographer František Drtikol.

This is the first exhibition of Drtikol’s images for 40 years, but the organisers were unable to bring to Slovakia a fully retrospective exhibition showing what Drtikol did for modern photography. While most Drtikol exhibitions have shown the photographs he took in the art deco style and the unique female nudes for which he is world-renowned, this display presents photographs, mostly studies and variations, which Drtikol made during the final period of his career, ones which were not designated for public presentation at that time. So this exhibition fills a gap and shows quite a bit more of Drtikol’s experimental photographic work.

Another exclusive exhibition in this series, Photographic History 1840-1950, covers 110 years of Russian photography drawn from the collection of the Russian State Archives of Literature and Art. The trio of regional exhibitions is closed out with a display of photographs of Stanislaw Ignacy Witkiewicz, an important figure of Polish art and literature, titled Witkacy: Psychoholizm – Portraits and Self-Portraits, from 1910 to 1939.

Within the section called Meeting of Five Continents, the organisers prepared exhibitions by Martin Parr from the United Kingdom for Europe and Chien-Chi Chang from Taiwan for Asia. Both these photographers are members of the prominent Magnum photo agency and both delivered lectures in Bratislava about their works.

In his Luxury series Parr shows the different ways in which people display their wealth. In some ways it is a continuation of his work from the 1980s and 1990s but in this series he not only focused on those with established riches but also on those who only recently became wealthy – in Russia, Dubai, China and India. He took these photos in the same spirit as others have taken photos of the poor and the most deprived. But the economic crisis puts these images into a different light.

“These images now have the effect of being an epitaph to an era of greed and excess,” Thomas Veski writes in the festival catalogue.

Chien-Chi Chang presents The Chain, a documentary photography project with 40 black and white, roughly life-sized vertically composed photographs of patients at Lung Fa Tang, a private mental institution in Taiwan. As part of the treatment programme, two patients are chained together with a ‘chain of compassion’ as an inducement for them to assist one another. Though at first glance The Chain seems to depict extraordinary circumstances, deep down the series may be predicated on a recurring duality that Chang has dealt with in his other works, wrote Fumio Nanjo, a curator at Mori Art Museum in Tokyo, adding that Chang’s works have always been suspended somewhere between freedom and restriction, normalcy and madness, hope and the darkness of human despair, and ultimately love and resignation.

The Americas are represented by Marcos López and his exhibition titled Grotesque Compositions from Latin America in the Digital Age. Malick Sidibé, who also won one of the World Press Photo awards this year, presents Africa with his exhibition titled Probe into the Life of African Society. Polixeni Papapetrou represents Australia with her exhibition Tales from Elsewhere.

Press Photo of the Year

Visitors to this year’s festival also have the opportunity to see the winning photos from the prestigious press photography competition, World Press Photo. The top Photo of the Year prize this year went to unpretentious photography from a series shot by Pietro Masturzo, a young Italian photographer, of lonely figures on a night-time roof in the Iranian capital of Tehran shouting in protest against the disputed presidential elections. As Andrej Bán writes in the festival catalogue, "the outcry was so strong that it has become an image".

Paul Ruseler, the project manager of World Press Photo, explained at the opening of the exhibition that the Photo of the Year must, first of all, represent one of the central contemporaneous issues of the year and that in 2009 the protests in the streets of Tehran certainly met that requirement. When Mahmoud Ahmadinejad claimed victory in the election despite allegations of vote-rigging, thousand of Iranians took to the streets, said Ruseler in explaining the very strong story behind Masturzo’s still photos. Photojournalists trying to work in Iran during this time faced many difficulties.

Masturzo was in Iran on a tourist visa but he was on the streets taking pictures of the demonstrators. He was arrested, his camera was taken and all his digital images were deleted. He was released from jail after a while but since he had no photographs left and the demonstrations were over, he could not recapture what was lost. But he happened to go to dinner with a friend and heard sounds outside, people shouting from the rooftops in protest against the election results.

He photographed them – and won.

“It is a very cinematic, dreamy kind of photography on the mental level of journalism,” Ruseler said. “It deserves the award.”

What: Month of Photography
When: November 1-30
Where: in galleries and other exhibition premises across Bratislava
For the complete festival programme, go to www.sedf.sk.