ROBERT Fico remains in charge of Slovakia’s largest opposition party after all 191 delegates at a recent Smer congress raised their hands and voted unanimously to keep the party’s first and – so far only – leader. They sealed their vote, which secures Fico in the job for another four years, with a standing ovation. In subsequent comments Fico, who portrays his party as an alternative to economic chaos and climbing prices, offered a helping hand to the government in tackling the aftermath of the economic crisis. But observers were quick to note that the former prime minister’s communication style is highly unlikely to change. 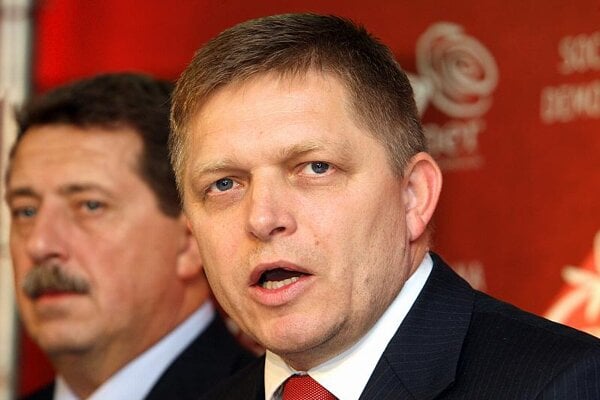 ROBERT Fico remains in charge of Slovakia’s largest opposition party after all 191 delegates at a recent Smer congress raised their hands and voted unanimously to keep the party’s first and – so far only – leader. They sealed their vote, which secures Fico in the job for another four years, with a standing ovation. In subsequent comments Fico, who portrays his party as an alternative to economic chaos and climbing prices, offered a helping hand to the government in tackling the aftermath of the economic crisis. But observers were quick to note that the former prime minister’s communication style is highly unlikely to change.

Fico’s message to the centre-right ruling coalition was trenchant: “The coalition scandalises and criminalises Smer to cover up its own rule. We are not interested in any political exchange of blows, but there will be a tough response to the insults.”

Smer’s boss said that if the ruling coalition does not stop these “insults”, his party would make use of “information” that it possesses.

“We were also in government; we have information as well,” Fico said on November 13 in Ružomberok, adding that his party would definitely respond to verbal attacks describing Smer as a “gang of corrupt communists”. He did not attribute this description.

The Fico government, which was in office until July this year, has been the subject of successive revelations of cronyism, poor management and alleged corruption by the incoming centre-right administration led by Iveta Radičová.

Apart from his warning to the ruling coalition, Fico also set out his ambition to return to government and rated the election potential of his party as 45 percent. He said that if the right-wing parties fail to form a government in future, they will be happy to enter a government with Smer. This would represent something of a turnaround on their part, since before the June general election all four governing parties vowed not to govern with Fico.

Political scientist Grigorij Mesežnikov, the president of the Institute for Public Affairs (IVO), said he did not expect Smer to depart from its confrontational approach to politics. Even the way the party emerged was confrontational, Mesežnikov told The Slovak Spectator: it did not have any partnerships or cooperation, and has always preferred confrontation, he said.

According to Mesežnikov, Fico is now indicating that if the ruling coalition stops criticising Smer, his party will leave its opponents alone. But he pointed out that this attitude is not in line with how Smer has been behaving.

“Regardless of whether someone has something against the party, Smer is always attacking,” Mesežnikov said. “They were attacking the opposition before the elections; now they are attacking the government: I would say that this is a party of systematic confrontation.”

Mesežnikov said it was significant that Smer had made normal relations with other parties conditional on concealing some information in case they decide to attack the party.

“In fact they imply that they would conceal information that would compromise their opponents,” said Mesežnikov, adding that this move would appear to put Smer at odds with the law.

The political analyst said that if Smer had any information which would compromise anyone it should have handed it over to criminal prosecutors long ago. The question therefore emerges of what kind of information this is, and whether it has been obtained illegally, Mesežnikov added. Political scientist Miroslav Kusý said that Fico has been worried about possible revelations regarding his party and has reacted mainly by pre-emptively dismissing these as attacks and insults. Kusý told The Slovak Spectator that Fico did not use reasoned arguments when his government was challenged over scandals such as the so-called bulletin-board tender. That case involved a €120-million contract being awarded to a politically-connected sole bidder; the European Commission later demanded a refund of the money spent.

“It seems that he is concerned now,” Kusý said.

Observers say that Smer has been projecting unity within its own ranks. At the congress the only notable change was the replacement of Igor Federič as deputy chairman by Peter Kažimír, the former Finance Ministry state secretary. Kažimír will be in charge of Smer’s economic agenda.

Kusý confirmed that there isn’t much political conflict visible within Smer.

“If there are any [conflicts], they are well concealed,” Kusý said. “It seems that Smer is really unified and the election of the chairman unambiguously shows this. It is still a one-man party and he is still unifying the party with his warlike slogans, his arrogance and his specific tone.”

Mesežnikov said that there are of course a number of interests which are not necessarily aligned, but the fact that Smer is a party which has support and has a popular leader eliminates any competition for the top post within the party.

“On the other hand, the fact is that Smer found itself in opposition after four years of practically unlimited rule, because whatever the party – which sated the material interests of various groups – wanted, it achieved over the previous four years,” said Mesežnikov. “Now, however, the party and its sponsors have lost this position and this is why a certain nervousness is culminating within the party.”

According to Mesežnikov, even though the party, its sponsors and Fico are getting somewhat anxious, this edginess is not reflected in any struggle within the party because they know that they do not have any better leader within their ranks.

“This edginess instead takes the form of aggressiveness towards the ruling parties; partly by portraying scenarios for reconstruction of the government and Smer’s participation in it,” said Mesežnikov.

Kusý suggests that staying outside the ruling coalition is certainly not a pleasant situation for Fico and that this is how former prime minister Vladimír Mečiar lost influence.

“His [Mečiar’s] preferences declined steeply after it became obvious that he was unable to construct a government. He was in a similar situation as Fico is today: high preferences; problems with coalition partners and shaping the government,” Kusý said.

In terms of Fico’s ambition of achieving an election result of somewhere close to 45 percent, Kusý does not see this as realistic. He believes that Fico’s rise has ended and that he is now trying to preserve the party and arrest his own decline.

“He has passed the zenith,” Kusý said. “Mečiar had a similar trajectory: after his rule he started falling and ended up outside parliament. These fates are very similar, as are the figures who lead these parties.”