SLOVAKIA’S governing coalition says it wants to better prepare Slovak kids for their future jobs by making English a mandatory subject, as it promised before the parliamentary election in June. While some parents and teachers welcome this initiative, others say this resembles past times when learning another language, Russian, was obligatory – forcing young students to learn what was called the language of Slovakia’s ‘eternal’ friend. Others are raising a more pragmatic question – will there be enough quality English language teachers? 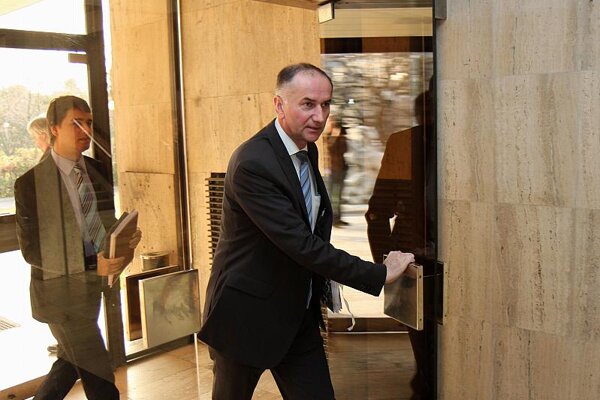 SLOVAKIA’S governing coalition says it wants to better prepare Slovak kids for their future jobs by making English a mandatory subject, as it promised before the parliamentary election in June. While some parents and teachers welcome this initiative, others say this resembles past times when learning another language, Russian, was obligatory – forcing young students to learn what was called the language of Slovakia’s ‘eternal’ friend. Others are raising a more pragmatic question – will there be enough quality English language teachers?

“World trends unambiguously show that the English language has been becoming the compulsory language learned in an increasing number of countries,” said Education Minister Eugen Jurzyca, as quoted by the SITA newswire in September.

“Lacking knowledge of English prevents Slovaks from establishing themselves in the labour market not only abroad but also in Slovakia. Abroad, graduates of our universities often must accept less-paid, unqualified jobs and in Slovakia the lack of English knowledge prevents them from climbing into higher managerial positions. Without proper knowledge of English it is much more complicated to study specialised literature or consult on solutions to problems at international forums with foreign experts.”

Information from the labour market confirms that employers increasingly demand knowledge of English. In the first half of this year, employers required knowledge of at least one foreign language for 62 percent of the offered jobs.

The most sought-after language by far was English, followed by German, according to data provided by the Profesia online jobs portal which reported that employers required English proficiency in 56 percent of job offers.

Martin Krekáč, chairman of the Jenewein Group, confirmed to The Slovak Spectator that employers have much higher expectations in terms of foreign-language skills when hiring people for high-level managerial positions and specialised jobs than they did in the past. Krekáč said this is primarily linked with the presence of a higher number of foreign companies operating in the Slovak economy and with an increasing trend of requiring a higher language levels for employees whose work, even if it is for Slovak companies, requires more or less active use of foreign languages when in contact with foreign partners, during business trips or for advanced education.

The revision approved by parliament at its first reading on October 19 does not specify exactly at what grade level students must be taught English but Education Minister Eugen Jurzyca has previously said it should begin as of the third grade level, the SITA newswire wrote.

“The English language is the most widespread language in international communication, in the environs of information technologies, science, research and the commercial sphere,” Jurzyca wrote in the documents arguing for the need to adopt the amendment. “Currently English is a mandatory foreign language in schools in most countries of the EU in which English is not the official language. In Slovakia only about 66 percent of pupils learn English while in the EU [overall] it is as much as 90 percent.”

The authors of the amendment also believe that better knowledge of English will improve the competitiveness of job seekers at home as well as abroad. Slovakia will become the 14th EU country to make English language instruction compulsory if the amendment is adopted by parliament.

Members of parliament from the opposition parties have criticised the amendment, stating that they do not think learning English should be compulsory, and pointing to what they say is a lack of qualified teachers. According to opposition deputies, students should continue to have the right to choose which languages they want to learn.

MP Bibiana Obrimčáková from the largest opposition party, Smer, thinks that the requirement to learn English may be counterproductive and may lead to animosity to the language by students.

“For example, after Spain made the English language mandatory, the fact emerged that pupils learned it with repulsion and refused to communicate in it,” Obrimčáková said during the October parliamentary debate, as quoted by SITA. She added that imposing this new duty recalls for her the times before 1989 when everyone had to learn the Russian language. She also questioned whether the new legislation violates constitutional rights. She remarked that already 80 percent of students now choose English and that only the remainder decide on a different language. She also expressed concern about a lack of qualified English teachers.

The Education Ministry informed The Slovak Spectator that at the end of November 2009 almost 13,000 teachers were teaching English at basic and secondary school levels.

Already at this time some schools are lacking English-language teachers. The ministry wants to fill the gap by using newly re-qualified teachers, who are upgrading their education so that they will be qualified to teach English.

According to the ministry the first group of re-qualified teachers should be ready this December and additional courses, lasting several semesters, can be covered using funds from the European Union, the Pravda daily wrote.

Ctibor Košťál from the Slovak Governance Institute told Pravda that Slovakia has enough people who are qualified as English- language teachers but not all of them are working in the education system.

“There are only two possibilities – to draw them back or re-qualify [others],” Košťál said as cited by Pravda. “The first solution would be more suitable but it would require better motivation. The minister has chosen the second path.”

Minister Jurzyca believes that Slovakia will have enough English-language teachers if the amendment is passed.

“Experience shows that Slovakia coped successfully with a 300-percent increase in the teaching hours of the English language over 10 years,” Jurzyca said, as quoted by SITA in late September when defending the new legislation before the cabinet. “The change which we are preparing would mean an increase of less than 20 percent. Thus we believe that there are enough facts indicating that Slovakia is able to introduce mandatory education in the English language as of the third class.”

During discussion within the cabinet Minister Jurzyca stated that the Education Ministry is prepared to guarantee quality education in English as the mandatory language, SITA wrote.

Helping hand from the UK

The British Council has already offered a helping hand to Slovakia. In September it delivered a proposal to the Education Ministry offering a range of courses for teachers that might meet the ministry’s requirements. Since that time its representatives have met representatives from the State Pedagogical Institute and the Methodology Centre to discuss how these materials could be used.

“The British Council has offered a range of courses to the Slovak Ministry of Education which have been successfully implemented in other countries in Europe (including Hungary, Poland, Turkey, Russia, Latvia, and Lithuania) and around the world,” Jana Riečanská, the spokesperson at the British Council in Slovakia told The Slovak Spectator. She added that “these courses can be delivered online or face-to-face or with a mixture of both. They include: English for Teaching – which combines language development and pedagogy; Classroom Language – to develop confidence and skills in using English in their lessons; Primary Essentials – for teachers of English working with young learners; TKT Essentials – an introduction to the theory associated with a communicative approach to English language teaching; and Learning Technologies for the Classroom.”

The British Council stated it is willing to offer these resources to the Education Ministry free of charge and also to train an initial group of trainers, according to Riečanská. The British Council hopes that the ministry would then be willing to cover the cost of delivering the training to teachers.

“We believe that this cost could be relatively low, as some of the courses can be delivered online,” said Riečanská.

The British Council already helps Slovak teachers of English to improve their skills. It offers a range of online tools for teachers and learners of English such as TeachEnglish and LearnEnglish. In addition it has run a series of LearnEnglish workshops for English teachers throughout Slovakia. The British Council also organises workshops for English teachers who prepare students for international English-language exams such as Cambridge ESOL or IELTS. In addition, through its British Centres in Košice, Prešov, Banská Bystrica, Žilina and Bratislava, it provides books and other resources for both teachers and learners of English, Riečanská said.

“All of these activities are popular with teachers and we hope to provide more of them in the future,” said Riečanská. “We would like to strengthen our cooperation with the Methodology Centre and the State Pedagogical Institute and other Slovak educational authorities to help Slovak teachers in accessing quality teaching resources and products.”