Love of country lost and found

YOUNG Juraj did not think he was leaving Czechoslovakia for good in 1968. For an educated, ambitious 22-year-old, the country held his past, but he soon decided that the regime did not offer a future. 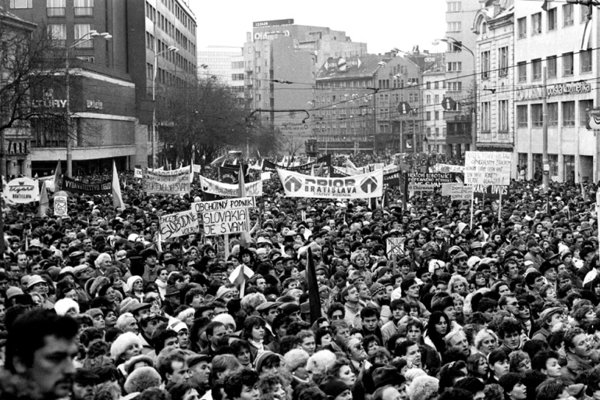 YOUNG Juraj did not think he was leaving Czechoslovakia for good in 1968. For an educated, ambitious 22-year-old, the country held his past, but he soon decided that the regime did not offer a future.

To be sure, a boy's life in Bratislava in the 1950s and 1960s had its charms: After-school ice-hockey games on the frozen ponds of the Carpathian foothills. Friday nights strolling and flirting with girls along the Danube's left bank, weekend train trips to hike or ski in the Tatra mountains.

But there were limits, and they were close at hand and they were harsh. From Bratislava's castle hill, Juraj and his friends could see Austrian fields and villages just beyond the Danube. But they could not bike over to them because of the barbed-wire fences and armed soldiers in towers guarding the border in between.

He yearned to travel as his grandparents had as young adults, setting off by train from Austria-Hungary to board ships in Hamburg and Bremen, bound for America. Juraj had heard stories of the journeys they'd made at the turn of the last century. And he wanted to do the same.

So when the opportunity came in the summer of 1967 for top students to study German in Bavaria, Juraj leapt at the chance. There he met a pretty young woman from New York named Anita. When summer ended and he returned to Bratislava, the provincial capital of Slovakia, Anita stayed in Germany to teach English. They kept in touch by letters, which they wrote to each other in German.

The months that followed brought exciting political change to Czechoslovakia in the form of Alexander Dubček's "socialism with a human face" and the "Prague Spring". The next summer, Juraj again had a chance to spend time in the West, this time in Norway. He packed his tiny suitcase with enough to sustain him for a matter of weeks. He did not return for 12 years.

When the tanks of Warsaw Pact nations rumbled into central Bratislava on August 21, 1968, Juraj made a decision that would change his life. He applied for and won a scholarship to study at the technical university in Aachen, where the Germans granted him political asylum. Anita joined him there.

Within two years, they were married at an Episcopal church in Scarsdale, New York. One hundred people attended. Not a single one was from Juraj's family. The couple returned to Aachen so that Juraj could finish his studies. While there, their first son was born. Anticipating their move to the U.S., they got him American citizenship.

Juraj finally lived out one of his childhood dreams in the summer of 1972, crossing the Atlantic on an ocean liner, just as his grandparents had at the beginning of the century. But unlike his grandparents, who returned from their adventure to a contented existence in Europe, Juraj started a thoroughly American life. His young family settled in to a starter home in Connecticut, where a second son was born. He learned English and even adopted an anglicised name: Jay.

At the same time, he shed his past. He did not seek out Czech or Slovak expatriates. He saw no reason for his sons—or his wife—to learn to speak Slovak. He did not go home to see his relatives.

In fact, his sister followed him to the U.S. in a risky defection with her husband and daughter. Their Bratislava apartment and belongings were promptly confiscated by the authorities. And Juraj's parents suffered. They were called by police to explain their son's absence. They destroyed all the letters Juraj sent to them, for fear that his critiques of the system would find their way into the wrong hands. The Communists pressured them to move from their three-bedroom downtown apartment to a home half the size.

In 1980, several years after he had gained U.S. citizenship, Juraj finally felt the time was right to return to Czechoslovakia. Still, he was nervous. He was not aware of having made any enemies, but it would not take much—someone simply planting something suspicious in his pocket—for the authorities to hold him against his will.

He brought his sons along for what turned out to be a largely merry and nostalgic home-coming with relatives and friends around the country. But several encounters convinced him he'd made the right decision those dozen years earlier.

One day, he parked his car with Belgian plates outside a friend's house for a couple hours. But one of the friend's neighbours was Communist Party General Secretary Gustáv Husák. And the following day, police knocked on the friend's door to ask about the dubious visitor from the West.

Another friend hosting a garden party joked that the Poles could strike all they wanted, but it was not going to harm the Soviet empire.

Staff at a hotel in east Slovakia also hinted that he was unwelcome—until, that is, one of his sons spoke in English, thereby revealing that this was an American family in possession of hard currency.

It would be nearly another decade before Juraj visited home for the second time.

The stalemate of the Cold War preserved Czechoslovakia's status quo late into the 1980s. With his parents in their 70s, Juraj started to wonder what kind of old age they would have to endure under Communism.

Then, quickly, as had happened in 1968, historic events again started to unfold, twisting the fate of individuals, families and entire societies in previously unimaginable directions.

In November 1989, Juraj "Jay" Zednik watched on television as the Iron Curtain—that hated symbol of all that had once prevented him from reaching his dreams and then prohibited him from re-connecting with his past—was torn down.

I, his eldest son, followed the news of Czechoslovakia's Velvet Revolution, which started 21 years ago this month, from my college dormitory. And I realised it was time for me to go to Bratislava.

Just weeks later, on a frigid night in early January, I stepped off a train from Vienna and set foot in the town of my father's birth for the first time since joining him on that initial homecoming a decade earlier. It was a visit of thrilling discovery, seeing my grandparents' life and starting to understand my father's past. My timing was also lucky. I squeezed myself into the second row of a packed square when Václav Havel delivered his first speech in Slovakia since being elected Czechoslovakia's first post-Communist president.

My father and I were in that same square three years later when Slovakia formally split from the Czech Republic. With champagne flowing and people dancing, Bratislava felt like a new place, like a city of hope, a city of possibilities.

But progress did not come easily. Slovakia's economy had been hit hard by President Havel's massive budget cuts. The new government in Bratislava responded with populist, nationalistic rhetoric, which isolated it internationally.Talk of membership in NATO and the European Union seemed distant dreams, if not cruel jokes.

It was in this context that my grandfather had a stroke in the spring 1994. Confined to a wheelchair, the stairs to the elevator meant he was also confined to his two-room apartment on the eighth floor of a Communist-era pre-fabricated concrete building. Fortunately, the regime change meant that my father could periodically visit my dying grandfather in Bratislava. And I was free to live and work in the city, which I decided to do.

My grandfather passed away the next autumn, but my father continued to visit Slovakia about once a year. With each visit, he re-connected a little more with his past. There was a family reunion where he caught up on the marriages of cousins and the deaths of uncles and aunts. There was a class reunion, where he was asked to give a presentation on his career in the West.

At the same time, his relatives and friends were starting to travel outside the Eastern bloc: to shop just a few kilometers away in the supermarkets of Austria; to do business in Western Europe; to vacation in America. Every trip, every conversation brought my father and those he had left behind closer together again.

When, in the new millennium, Slovakia did, in fact, join NATO and the EU, nearly four decades of misdirected history came full circle.

The more my father got comfortable with the present situation, the more he became proud of his past. Over the years, he had gotten used to introducing himself as American. When pressed on his accent, he'd say he was from Eastern Europe, unsure if the questioner would have heard of his home country. But now he was confidently declaring that he was from Slovakia, home of prominent ice hockey players and tennis players. He eagerly played tour guide to friends when their Danube cruise docked in Bratislava for a few hours. He indulged my attempts to speak halting Slovak.

Juraj Zednik—the political asylum-seeker whom Czechoslovak authorities forced into official statelessness, the defector who had turned his back on a homeland gone rotten—was back, figuratively, where he belonged. But there remained some unfinished business. The son Juraj had when he lost his Czechoslovak citizenship remained without the papers to suggest his family's national heritage.

And so I, nearly 40 years old, finally applied for Slovak citizenship this year. When it was granted, nothing about me was different. But somehow, everything was different. For the first time in my life, I am now officially Slovak-American. Yet this de jure status change is simply the recognition of what had always been de facto. When I applied, I asked the official in Bratislava about my application's chances for success. She said something that my father—back in the dark days of the 1970s and 1980s—could never have dreamed he would ever hear a state employee say to his son: "You are Slovak."

Mr. Zedník is CEO of EurActiv.com and co-founder of the Slovak Spectator.

Reprinted with permission from The Wall Street Journal Europe.