Minister faces off against chief justice

DENYING state auditors access to institutions which subsist on public funds is a potentially costly activity – or so the president of Slovakia’s Supreme Court, Štefan Harabin, may be about to find out. The Supreme Court has, at Harabin’s direction, been denying access to Finance Ministry auditors since August this year. Finance Minister Ivan Mikloš has hit back with a €33,000 fine, and Mikloš and Harabin have since sued each other’s institutions. 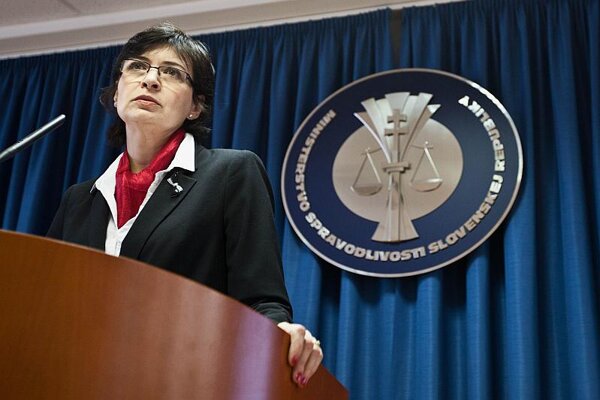 DENYING state auditors access to institutions which subsist on public funds is a potentially costly activity – or so the president of Slovakia’s Supreme Court, Štefan Harabin, may be about to find out. The Supreme Court has, at Harabin’s direction, been denying access to Finance Ministry auditors since August this year. Finance Minister Ivan Mikloš has hit back with a €33,000 fine, and Mikloš and Harabin have since sued each other’s institutions.

Now, however, Justice Minister Lucia Žitňanská has weighed in by filing a proposal with the Slovak Constitutional Court to launch a disciplinary proceeding against Harabin. The Supreme Court responded by suing her too.

“Today I have taken, in my opinion, a serious decision, because it does not happen every day that a disciplinary proceeding is filed against the president of the Supreme Court,” Žitňanská told the press on November 18.

Žitňanská proposes the highest possible fine for Harabin: a one-year, 70-percent cut to his salary. She has also confirmed that the Ministry of Justice has received several proposals for disciplinary proceedings against Harabin and is reviewing all of them, the SITA newswire wrote.

Harabin has interpreted the proposal as an effort by Žitňanská to incite further conflict after “an investigator and special prosecutor had brushed the whole case aside”.

“I'm curious whether Ms. Žitňanská and Mr. Mikloš will resign after I’m acquitted…” Harabin said on November 18. “This is clearly a purposive proposal built on legal nonsense.”

On November 24, the Supreme Court filed a criminal prosecution against Žitňanská over what it called suspicion of committing crimes of abuse of power, intervening in the independence of the courts, libel and unauthorised use of personal data, SITA reported.

The court asserts that Žitňanská committed these offences when she submitted and published the proposal for a disciplinary proceeding against Harabin. It says she stated untrue information as well as publishing personal data. According to the court, Žitňanská has violated the constitutional principle of presumption of innocence and international protocols on the protection of judges.

“The step of the minister cannot be taken lightly because we have information [she is] planning to continue publicly intervening in the judiciary’s independence,” Harabin said, as quoted by SITA.

The same day, Žitňanská responded that filing proposals for disciplinary proceedings lies within the authority of the justice minister and that she will use this authority whenever she believes that a court chairperson has violated the law.

Ministerial inspectors tried to begin an audit at the Supreme Court on July 29, but Harabin prevented them from doing so. Though he has said that he has nothing to hide, he has since continued to resist all attempts at a ministry audit, most recently denying access to inspectors on October 26.

Mikloš said that by blocking the ministerial audit Harabin might be abusing the independence granted to courts and judges.

“If any other public official or minister acted like this, I would have submitted a proposal for his or her dismissal long ago,” Mikloš said earlier this year, as quoted by SITA. “Štefan Harabin is using the fact that judges cannot be dismissed in this way.”

Mikloš admitted that for him the only way to sanction the Supreme Court and its president was to impose fines. The Finance Ministry has also commented that it seems Harabin has something to hide.

Harabin has repeatedly asserted that “only the Supreme Audit Office (NKÚ) wields the right to supervise the Supreme Court”.

The media subsequently noted that the NKÚ is headed by Ján Jasovský, who earlier served as a minister after being nominated by the Movement for a Democratic Slovakia (HZDS). This is the same party that nominated Harabin as justice minister, the job he held prior to becoming Supreme Court president.

According to SITA, Harabin claims the ministry’s audit is politicised and that Mikloš’s aim is to create a scandal at the Supreme Court and have its budgetary independence removed.

Earlier this year, the Office of the General Prosecutor said that Harabin had not committed a crime by refusing to permit auditors from the Finance Ministry to examine the accounts of the court. As a result, Special Prosecutor Dušan Kováčik supported the stance of the police officer who on October 20 advanced the matter to the Office of the Justice Minister, as the competent administrative authority. However, the Office of the General Prosecutor also turned aside a criminal motion which the Supreme Court filed against Mikloš. Harabin complained that the speed with which the prosecutor’s office dismissed the criminal motion against Mikloš was striking and that no evidence had been collected, SITA wrote.

Both the president of Slovakia’s Constitutional Court, Ivetta Macejková, and Slovakia’s ombudsman, Pavel Kandráč, have stated that a Finance Ministry audit of spending at the Supreme Court is a normal procedure. In the past the Supreme Court’s accounts were audited by the ministry without demur.

The Constitutional Court, which will decide on Harabin’s case, backed former Supreme Court president Milan Karabín in 2007, when Harabin (then justice minister) filed a proposal against him after he blocked an audit by the Justice Ministry. At that time the Constitutional Court ruled that “it is not possible to solve conflicts germinating from different legal views by disciplinary proceedings”. Harabin now claims that he and Mikloš have differing legal views, the Sme daily wrote.

Yet the audit is far from the sole issue over which Harabin and the current ruling coalition differ. Harabin loudly objected to several changes that Žitňanská recently proposed as part of what she called an effort to bring more transparency into the country’s judiciary.

Based on her revision to the Judicial Council Act passed on October 19, the sittings of the Judicial Council, which is led by Harabin, will be made public and its members will be obliged to provide arguments for their decisions, mainly concerning personnel issues. The revision bans chairs and deputy chairs of courts from being members of the council. However, the Supreme Court president will remain eligible, based on the country’s constitution.

Harabin said this was an effort by Žitňanská to conquer the judiciary politically.

“It is crucial to protect the independence of the judiciary and to ensure a balance in the distribution of power in the state,” Žitňanská said in a statement provided to The Slovak Spectator. “We are striving to remove power from those who aren’t entitled to it and return it to those who are: in decision-making this power belongs to the judges, and in controlling the judiciary the power should be with the public.”

In September 2009 an open letter was signed by 15 judges who warned of what they called an abuse of disciplinary proceedings against certain judges, often critics of Harabin; shortly afterwards, 105 judges signed the “Five Sentences” petition to initiate a serious debate about the state of the judiciary in Slovakia; and earlier this year, the initiative For an Open Judiciary emerged in response to what its founders called political intervention, lack of transparency and the misuse of disciplinary proceedings, among other issues.

In mid September, the transparency watchdog Fair-Play Alliance alleged that the Supreme Court may have breached the rules for assigning cases to judges and senates. The NGO said there were suspicions of serious interference in the independence of the judiciary.