AFTER weeks of tension the four parties that make up Slovakia’s ruling coalition left it until the very last minute to pick a joint candidate for general prosecutor. Jozef Čentéš, currently a deputy director of the penal department at the Office of the General Prosecutor, is the coalition leaders’ compromise choice to challenge incumbent Dobroslav Trnka in a parliamentary vote on December 2. 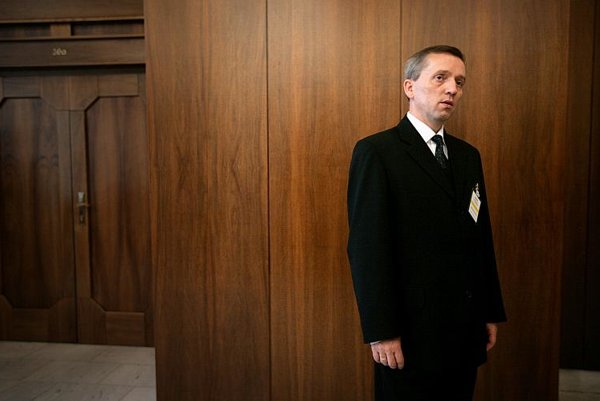 AFTER weeks of tension the four parties that make up Slovakia’s ruling coalition left it until the very last minute to pick a joint candidate for general prosecutor. Jozef Čentéš, currently a deputy director of the penal department at the Office of the General Prosecutor, is the coalition leaders’ compromise choice to challenge incumbent Dobroslav Trnka in a parliamentary vote on December 2.

Only 15 minutes before the deadline to submit candidates – 18:00 on Monday, November 22, when parliament’s filing room was due to close – the ruling coalition announced that it had reached a decision about whom to support in the December 2 vote to choose the next general prosecutor.

The final decision was preceded by a tense day: coalition leaders met in the morning for two hours to discuss proposed names.

Peter Sepéši had been put forward by Freedom and Solidarity (SaS), while Most-Híd had suggested Jozef Szabó. But those talks ended without agreement. After a five-hour adjournment, the leaders reconvened and later announced a surprise choice: a previously undisclosed candidate, Jozef Čentéš.

Čentéš has been described by the coalition leaders as a compromise choice after tough negotiations, but also as the best choice of all the nominees for the post.

“We searched for a morally untainted person with a good position,” Radičová said, as quoted by the TASR newswire, adding that Čentéš fulfils that condition. She supported her statement by saying that he had recently been appointed a member of the government’s Legislative Council.

Čentéš currently serves as the deputy head of the penal department at the Office of the General Prosecutor (GP). He has specialised in drug-related crime. He started his career as a prosecutor in 1992, and joined the GP at the end of the 1990s under then-general prosecutor Milan Hanzel. Čentéš also lectures on penal law at the Pan European University in Bratislava. According to the Sme daily, he is not on friendly terms with the current general prosecutor, Dobroslav Trnka.

“The names that resonated in this round were the names of experts, not political nominations,” Prime Minister Iveta Radičová told journalists, saying that Čentéš was the candidate of the whole coalition. The heads of the parliamentary caucuses of all four ruling coalition parties confirmed this by jointly submitting Čentéš’ nomination to the filing room.

Some in the Slovak media have speculated that with the Slovak Democratic and Christian Union (SDKÚ) and the Christian Democratic Movement (KDH) controlling the justice and interior ministries respectively, they may have granted the other two coalition parties – SaS and Most-Híd – a greater say in selecting the joint candidate for general prosecutor.

One of the coalition leaders appeared to confirm this. “There was a system to find a person as soon as possible, and we could say that there were certain parties that were more active in that, based on the agreements,” Most-Híd chairman Béla Bugár said, as quoted by Sme.

Political analyst and head of the Institute for Public Affairs, Grigorij Mesežnikov, says it is good that the coalition has managed to conceal who came up with the idea of proposing Čentéš.

“It is a good indicator that the [candidate] is not partisan, and good for the whole coalition,” Mesežnikov told The Slovak Spectator. He added it was even possible that some opposition MPs might regard the candidate positively and support him in the parliamentary vote.


“I wouldn’t completely rule out that his profile could be acceptable for at least part of the opposition, although there is not much of a chance,” he said. “That would increase his chances of being elected.”

Trnka will run against Čentéš in the December 2 secret ballot in parliament. He was proposed on November 22 by opposition Smer MP Mojmír Mamojka, although he had previously failed to be selected during a round of voting which took place in early November.

At that time, the ruling coalition suffered a blow and observers doubted its stability when Radičová’s party, the SDKÚ, failed to agree with the other coalition parties on a common candidate.

Parliament then failed to select any of the original three candidates for general prosecutor in a first secret ballot on November 3. After third-placed candidate Ján Hrivnák, nominated by the SDKÚ, had been eliminated, Trnka, supported by Smer and the Slovak National Party (SNS), and Mária Mišíková, backed by the Christian Democratic Movement (KDH), SaS and Most-Híd, faced each other in a run-off on November 4. However, SDKÚ MPs then blocked both of the remaining two candidates by registering for the ballot but not casting any votes, thus ensuring that neither Trnka nor Mišíková received a majority among those MPs present.

Despite all the SDKÚ’s MPs saying that they ultimately voted against Trnka staying in the job, it had been an SDKÚ MP, Stanislav Janiš, who in a surprise move originally proposed Trnka for the post. Janiš said he backed Trnka because of his progress in cases tackling organised crime, but the MP’s move led to speculation about other possible motives and about possible splits within the SDKÚ. Radičová even suggested that if Trnka was re-selected, she would consider resigning.

The two latest candidates introduced themselves to the parliamentary Constitutional and Judicial Affairs Committee on November 24. Introducing his vision for the job, Čentéš said he would not succumb to political pressure if he were elected to the post.

“I’m not a nominee of any political party,” Čentéš said, as quoted by the SITA newswire. “No politician is either close or far from me. During the period that my candidacy was being considered I have not met any minister, any MP, or any political party representative. I don’t believe anyone would want to put political pressure on me.”

While Čentéš set out some big changes that he intends to make if selected, Trnka did not do so. Čentéš said it was of core importance to restrict so-called negative orders, which enable the general prosecutor to halt criminal proceedings or cancel charges at any time. Čentéš said he also wants to publish the decisions of the Office of the General Prosecutor and property declarations by prosecutors. None of the candidates considered in the previous parliamentary votes advocated such changes, Sme reported.

The heads of the parliamentary caucuses of all four ruling coalition parties say that all their MPs will vote for Čentéš in the December 2 secret ballot. If this happens, Čentéš will get the job. But Mesežnikov warns that his success is not guaranteed.

“The coalition has managed to reach a compromise regarding the selection of the candidate, but it is still unclear whether [their candidate] will also be selected [by parliament],” he said, adding that the coalition’s accord should only be celebrated once its candidate successfully clears the parliamentary vote. “Since the prosecutor is selected by secret ballot, there is a risk that the result might not be the one that the ruling coalition is hoping for.”

Mesežnikov said there was a small possibility that Trnka might attract some votes from among coalition MPs, although he believes that Čentéš’ success is highly probable. If the coalition candidate is selected as general prosecutor, it will be a success not only for him, but for the coalition too; a sign that despite the differing opinions, it is able to reach accord, Mesežnikov concluded.