SLOVAKIA’S electronic highway toll-collection system has been operating for almost one year, but it seems that the bugs in the system are yet to be ironed out. One association of Slovak haulage companies has taken its complaints to court and is also saying that the new government of Iveta Radičová is doing nothing to fix the faulty system. 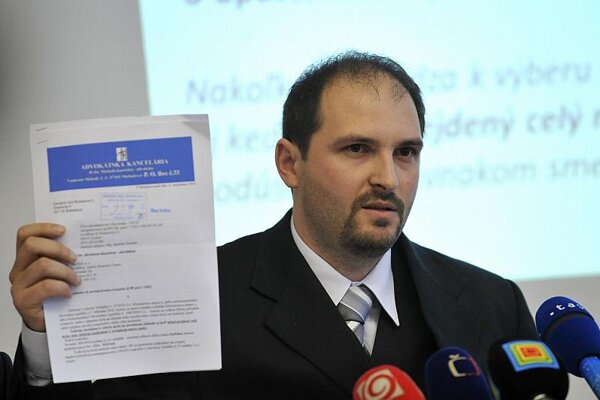 SLOVAKIA’S electronic highway toll-collection system has been operating for almost one year, but it seems that the bugs in the system are yet to be ironed out. One association of Slovak haulage companies has taken its complaints to court and is also saying that the new government of Iveta Radičová is doing nothing to fix the faulty system.

Questions about the toll system are not confined to Slovakia’s borders: the country must also respond before the end of this year to objections raised by the European Commission about how the 2008 tender for the system was handled.

In mid November the Union of Motor Carriers of Slovakia (UNAS), an organisation launched by dissatisfied road hauliers at the beginning of this year, filed two lawsuits against SkyToll, the operator of the electronic toll collection system.

“The toll collection system in Slovakia is loss-making, overpriced and ineffective,” UNAS head Jaroslav Polaček said on November 16, as cited by the ČTK newswire. He stated that SkyToll has been collecting tolls for highway sections that should not be part of the toll system and that it is also failing to collect tolls on roads where they should apply.

UNAS estimated that the state will lose about €5 million because of poor toll calculations in a single year. UNAS is demanding with its lawsuits, among others, that SkyToll replaces the current toll-collection system with one that is error-free.

UNAS has been criticising the operation of the electronic toll collection system since its launch in January. The motor carriers clustered within UNAS unsuccessfully sought termination of the system earlier this year and in May the association filed complaints against the government as well as the state-run National Highway Company, ČTK wrote.

SkyToll responded that it perceives the UNAS lawsuits as an attack against the company while it is submitting a bid in a tender to enhance the e-toll system in the Czech Republic. According to ČTK, SkyToll is seeking to build a satellite toll-collection system covering 5,500 kilometres of first-category roads and 3,500 kilometres of second-category roads in the Czech Republic.

“The aim of UNAS is nothing but its own self-presentation,” SkyToll spokesperson Lenka Lendacká told The Slovak Spectator. “All the involved parties, i.e. the Transport Ministry, the National Highway Company, ČESMAD and SkyToll – except UNAS – are interested in enhancing the toll system and are responding to every sensible impetus.”

Lendacká charged that UNAS began beating the drum again after a half-year break exactly when negotiations are taking place about the entry of SkyToll into the Czech market.

“For us this is a clear confirmation that we have made somebody nervous by our commercial interests in the Czech Republic,” said Lendacká.

In response to concerns raised about the system, the Transport Ministry has formed a commission to examine and handle problems related to toll collection.

“It is dealing with the situation and will also deal with reservations of motor carriers,” Martin Krajčovič, spokesperson of the Transport Ministry, told the Pravda daily.

The Association of Road Transport Operators of the Slovak Republic (ČESMAD), which had participated in preparing the electronic system since its inception, has been monitoring toll collection and believes that its findings and suggestions have helped improve the system.

“We are convinced that especially these impetuses have significantly contributed to tuning the e-toll collection system so that it complicates or limits the business of our members, as well as other motor carriers in Slovakia, as little as possible,” Pavol Jančovič, president of ČESMAD told The Slovak Spectator, adding that his association’s members include most of important hauliers in Slovakia.

ČESMAD has raised some of its own objections to the electronic system. Jančovič specified that one of its primary complaints is that compared to the previous sticker system motor carriers must now pay significantly more to use the road infrastructure even though tariffs were reduced by 20 percent before the start of the electronic system. Its second objection is that there are almost no discounts for ecologically-friendly trucks which ČESMAD views as an anomaly in this environmentally-sensitive time. A third objection concerns the high level of fines for violations. But Jančovič said that ČESMAD is actively seeking remedies in all three areas.

Jančovič also noted that because of the increasing number of countries operating e-toll systems the front windshields of trucks are being covered by multiple onboard units and his association is calling for interoperability of onboard units with other European countries.

The electronic toll collection system was launched in Slovakia on January 1, 2010, and requires trucks and buses heavier than 3.5 tonnes to pay tolls on about 2,000 kilometres of highways, dual carriageways and sections of first-category roads. The toll system was built and is operated by SkyToll, whose bid for the 13-year contract worth €850-million was chosen after every other bid had been excluded from the tender on technical grounds. All the other bids were cheaper.

The tender process drew flak from EU officials in Brussels and Slovakia has until the end of December to respond to the objections posed by the European Commission in order to avert possible court action and sanctions. The EC believes that Slovakia violated the EU’s rules of equal treatment and non-discrimination during and after the tender.

The EC has questioned whether SkyToll, which submitted the highest bid, enjoyed an unfair advantage. A letter sent by the European Commission on April 14 stated that Slovakia may also have acted in a discriminatory manner by excluding one of the bidders on the grounds that it had submitted what the procurer called “an unusually low price”.

In addition, Andrea Elscheková-Matisová, the head of the European Commission representation in Slovakia, told the TA3 news channel that the original contract conditions were significantly changed after the contract was signed.