Learning to be tolerant

BUILDING a tolerant society is never an overnight project and sometimes many years are needed to achieve such a goal. The desire of minorities to preserve their identity and lead a full and dignified life as well as the hopes of sexual minorities for registered partnerships or achieving full gender equality are difficult issues that require broad social discussion in a mature and tolerant national atmosphere. 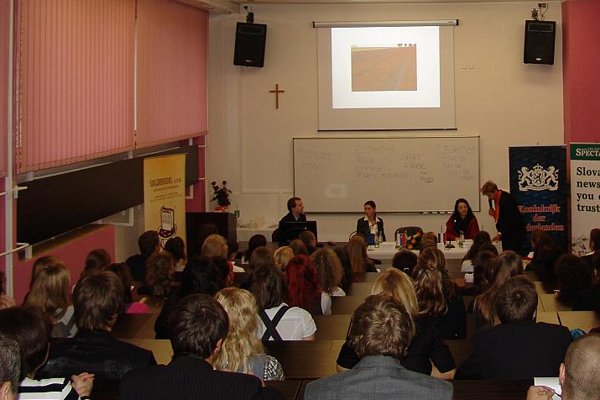 BUILDING a tolerant society is never an overnight project and sometimes many years are needed to achieve such a goal. The desire of minorities to preserve their identity and lead a full and dignified life as well as the hopes of sexual minorities for registered partnerships or achieving full gender equality are difficult issues that require broad social discussion in a mature and tolerant national atmosphere.

Daphne Bergsma, the Ambassador of the Kingdom of the Netherlands, said she was quite optimistic about developments in Slovakia based on the discussion she held in the auditorium of the Evangelic High School of Juraj Tranovský in Liptovský Mikuláš. Ambassador Bergsma reviewed the lessons her country has learned in building a more tolerant society and offered much information about the image and atmosphere of her homeland as part of a project called Bringing the World to the Classroom.

From the questions that the students had prepared for the ambassador it was clear that this was not to be just a long lecture with loads of information dished out to the students: Isn’t a multicultural society just utopian? Is the acceptance of euthanasia a test of tolerance? How does Geert Wilders fit into the image of her country’s tolerance? Is there cooperation between The Netherlands and other countries of western Europe in regulating immigration?

One of the colourful images that Bergsma showed the students was the painting Girl with a Pearl Earring, the work of famous Dutch painter Johannes Vermeer from around 1600, alongside another image featuring a Muslim girl working at a supermarket wearing a headscarf in 2010. Bergsma pointed out the beauty in their headwear and that the two women were wearing their headscarves in a very similar way – suggesting that what the students are seeing is The Netherlands four centuries ago and in 2010.

Bergsma noted that three and a half million of the 16.5 million people living in The Netherlands are foreign-born, explaining that “foreign-born people” is a politically correct term while in the past some Dutch citizens would use the terms ‘foreigners’ or perhaps even ‘outsiders’.

What inspired the fieriest discussion was a tolerance test that Bergsma brought to the students: “The owner of a shop in a little village has a sign in the window: we do not allow more than one Roma in the shop at the same time. What do you think about that?”

The students had three options to pick from: A – it does not bother me since in some shops students are not allowed to enter in groups as well; B – this is not fair and it is forbidden to treat some people differently from others; C – I can understand it because the shop owner probably had experience with Roma stealing. The students then discussed some of the stereotypical ways that Roma issues are handled in Slovakia and searched for a better solution that could be used by the shop owner – one that does not discriminate against a particular ethnic group.

When asked about her impressions, student Ľubica Garajová told The Slovak Spectator that she will take home the thought that the meeting had sown a little seed into her and her peers that “we should think a little more about people who surround us; who they are and how we look at them and whether we have prejudices that we are not always aware of”.

“I really think that it wasn’t only a passing event for me,” Garajová said. “I think now I will tend to think more about how I look at people and what I see.”

Garajová said in her environment there is not much theoretical talk about tolerance but that she comes from a small village where there is a Roma community and she has many Roma friends and feels she is practising lessons of tolerance in her daily life.

Another student, Ján Hladký, said he was impressed that the ambassador had devoted so much time to the discussion with the students. Hladký said that he had spent much time preparing for the meeting and studied materials about The Netherlands. What was most interesting to him was the comment by the ambassador that people in her country no longer view Gay Pride parades as exclusively for homosexuals but that even heterosexual people walk along and have a good time at such parades.

Bergsma told The Slovak Spectator that she was impressed by the level of English-language proficiency of the students and also their maturity in terms of theoretical knowledge about her country and the sophisticated nature of the questions they asked.

The discussion between the Dutch ambassador and the students in Liptovský Mikuláš was a pilot meeting of the Bringing the World to the Classroom project developed by The Slovak Spectator, several foreign embassies in Slovakia and Sugarbooks, a distributor of textbooks.

The goal of the programme is to promote greater openness to different cultures and to motivate students to pursue further education. The sponsors of the project believe that discussions in the English language with significant personalities from the international community can inspire young people’s understanding of crucial issues for a tolerant society, one which welcomes different cultures and is capable of participating in international discourse.

The second event in the series was held in Zvolen and featured George Lemieux, the Charge d’affaires of the Canadian Embassy, who along with other speakers discussed the importance of learning foreign languages. The Slovak Spectator will report on the Zvolen event in a future issue.

As part of the project students from the participating schools are invited to write English-language essays on the discussion topics. The Slovak Spectator is publishing excerpts from the best-written essays:

Roma and Hungarians in Slovakia; Tibetans in China, Muslims in Bosnia and Herzegovina or Chechens in Russia are people who have lived in those countries for many centuries. They have their own cultures, languages or religions and no one has the right to abolish, replace or remove these minorities from their historical locations. The majority must be aware of this and learn how to get along with those smaller groups. Barbara Rusnáková

When it comes to homosexuals, Slovakia belongs among conservative countries. I think there is nothing wrong or unacceptable about registered partnerships. Everyone has an option to choose what is best for them. If we respect heterosexual relationships, then why not homosexual ones? Magdaléna Macková

I am curious how many people would be able to tolerate themselves had they been put together with a person with exactly the same attributes but a different appearance. Would they not find that person sitting across the table really narrow-minded? Or just not sensible? Anyway, they would probably not be likeable to themselves. How can we expect after that they would manage to tolerate others? Andrej Vlček

In my opinion, tolerance depends on common understanding, reason and total absence of prejudice of any kind. Tolerance towards a minority should have its borders only if it confines the majority. Rastislav Beťko

The question should be “Are the Slovak minorities tolerant towards Slovakia?”
There should not be any differences between the majority and the minorities. Katarína Bazelová

As is well-known we are or at least should be a democratic society where everyone is equal. Nobody should be bullying or humiliating others and all people are treated in the same way. But is it really like this? No, and I think everyone knows that. Veronika Nerádová

Central Europe has been a trade crossroad for many centuries. Many cultures met here since different nationalities had settled in this area. Although living together was not without tensions, people accepted each other at this place. Now, the situation is different. People live in one state together while sharing the same values. Respect and mutual acceptance are very important in modern Europe. People of all states share the same values with no difference in race or ethnic background. Daniel Hudák

In my opinion, most of the problems come from history. Governments try to solve problems in the regions around the southern border but the view of ordinary people is different.
We live together in one country and we will live here side by side also in the future, so we only need to find out how to get on well with each other. Simona Kubovčíková

Most people think that the highest tension is in the border region where both Slovaks and Hungarians are living; but everyone who has ever visited southern Slovakia has seen that Slovaks and Hungarians live there in peace and harmony and that there are no conflicts between them. The source of the problem lies further from the borders on both sides. Mainly people who never saw a living Hungarian (or a Slovak in Hungary) think of them as a threat. Rudolf Kohulák

There is not a single country in the world where all people belong to the same nationality. I think that cultural diversity can bring a lot of advantages; we can observe typical characteristics and customs of different cultures, learn more about their religions, habits and the ways of living. As for minorities in Slovakia: it is true that the government grants them their human rights and tries to support them; on the other hand it seems to me that it is difficult for common people to accept them as equal. We are a conservative nation which is afraid of new things and unknown influences. Secondly, we think that all people of a certain culture are the same. As a result of these opinions, people often treat different human beings unfairly. Ivana Sopúchová

First of all, every living person needs to be loved and feel acceptance. Would a different sexual orientation or marrying a Roma person stop us from loving them? Can we really tolerate our differences even when they become a part of our everyday life and are not only in a newspaper article? Veronika Masloviaková

What kind of people are we? Are we those who need to be tolerated, or those who tolerate? Do we know how to accept various people living in Slovakia? Our society is fragmented. There are several minorities which need to be tolerated and respected by the majority and it is only up to us to show how we should behave towards them. Viera Dunajová-Jurčová

To be honest, I do not meet people from minorities often, or at least I do not know about those whom I meet that they belong to a minority. So I try to treat people equally, but it is also true that when I realise that somebody who belongs to a minority does something bad, then I think that everyone from that minority is the same. All I can do – and what I am already doing – is not to judge people before I get to know them and even after that. None of us have the right to judge people for who they are. Jana Voreková