This is not a hammer, this is an auction!

Many of you who are interested in the visual arts will certainly be familiar with the iconic painting by the Belgian surrealist René Magritte, ‘The Treachery of Images’. According to its author it is not a pipe; only an image of it. The Bratislava based company Dot Blu took inspiration from this picture in their campaign for the beneficial auction from the non-government organisation Lepší svet, n.o., which provides services for mentally challenged people. The auction is being held under the title "This is not a hammer, this is an auction.” 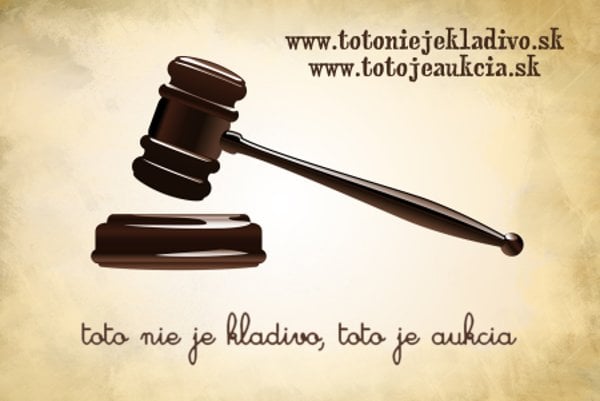 The main motif of the beneficial auction campaign by the organisation Lepsi svet, n.o. is in the title: "This is not a hammer, this is an auction" (Source: Lepší svet, n.o. )
Font size:A-|A+

Many of you who are interested in the visual arts will certainly be familiar with the iconic painting by the Belgian surrealist René Magritte, ‘The Treachery of Images’. According to its author it is not a pipe; only an image of it. The Bratislava based company Dot Blu took inspiration from this picture in their campaign for the beneficial auction from the non-government organisation Lepší svet, n.o., which provides services for mentally challenged people. The auction is being held under the title "This is not a hammer, this is an auction.”

The auction is to be held on 7th December at 7:00 PM at the premises of the prestigious VIP Club Penati in Bratislava. In addition to precious works of art, items from well-known Slovak personalities will also be auctioned. Whether the names or items are tempting – you can judge for yourself.

The auction is open to all who are attracted to the exciting world of auctions and betting and who - by purchasing of one of the auctioned items - would like to support the creation of the Community Integration centre Lepší svet for mentally challenged people in Bratislava - Karlova Ves, which will be created in the building of the previous Kotva shopping centre. The project is to support much needed and important personal developments for mentally-challenged young adults, such as the “achieving of independence” through the social service of “supported housing”. These social housing facilities will be connected to assisted-living facilities for elderly people and to the sheltered workshop Lepší svet. The service will be created through the complex rebuilding and reconstruction of the premises of the former Kotva centre. This means that the project will be one of a kind in Slovakia.

Campaign
The central campaign theme of the whole event is a picture of auction gavel bearing the inscription: "This is not a hammer, this is an auction”. However, there is not merely an auction hammer either – while the auctioneer’s blow will symbolically start everything, the very auction is part of a public collection to help people with intellectual disabilities, which will take place in the whole Slovakia from early December under the slogan: “Nezatvárajte nám dvierka!” ("Do not close our doors!")

What is prepared for the guests of the auction?
After the arrival of guests and the registration of the auction numbers, the “Ruby toast” is prepared for everyone. This will be a combination of noble ruby-red coloured wine, produced by Mr. Ignác Černay (Víno Hugo), with a ruby jewel from the Siddesign company. The lucky person who finds the little ruby stone in his glass during the toast will win a valuable surprise.

Part of the rich cultural program will be a performance by mentally challenged people - the clients of PSC Lepší svet and violin virtuoso, Mgr. Rastislav Šipoš. Other performers will include: the Latino Culture Project under the leadership of Miguel Méndez, the flamenco music group Los Remedios, and the Kuštárovci brothers’ folk music group. The sound and lights will be provided by the company Kolly.
The finale of the program will be the already mentioned auction of rare art works, and items donated by well-known Slovak personalities. Guest are undoubtedly expecting great excitement, as some of the works - such as images from Mednyánszky, Rudnay, Hložník or other authors - are rare collector's pieces from closed collections.
For fans of sporting heroes, gloves specially tailored for the world champion in boxing Tomi "Kid" Kovács, or a paddle made and specially designed for Jana Dukátová, the world champion in slalom canoeing, will no doubt be valuable items. Further attractions are also undoubtedly the exclusive premises of the Penati Club in Bratislava, the tasty reception, or the chance to meet any of the celebrities who are supporting this project.
Already you can see most of the figures in the promotional videos, which are designed by the HD Studio company to support the beneficial auction. You can see them on YouTube or Facebook, as well as on the websites created especially for the event: www.totoniejekladivo.sk and www.totojeaukcia.sk. And if in the next few days you see a big hammer somewhere in the street, then do believe your eyes, and do come to the beneficial auction to support Lepší svet (Better World)...

Employers subject to obligations under the Slovak Law (NR SR Act. 5 / 2004 Z.z. about Employment Services) can purchase items connected with the sheltered workshop of Lepší svet as a fulfillment of their obligation to employ disabled people, thereby substituting this for any fines imposed by the law and support a good thing.

Do not close the door to us - open your hearts and come to support the beneficial auction of Lepší svet,n.o.

We cordially invite you!