RESIDENTS of Slovak villages, towns and cities elected their mayors and local council representatives on November 27, rounding out a year of elections which has seen a change of government and the removal from the national political stage of some established names.The municipal elections confirmed the opposition Smer party as the most popular in Slovakia but observers say it did not register a knock-down victory. 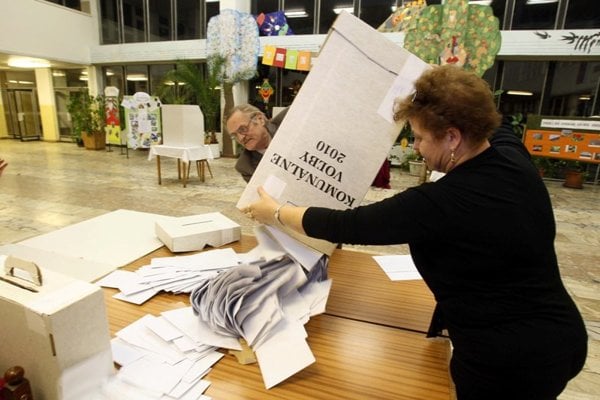 RESIDENTS of Slovak villages, towns and cities elected their mayors and local council representatives on November 27, rounding out a year of elections which has seen a change of government and the removal from the national political stage of some established names.
The municipal elections confirmed the opposition Smer party as the most popular in Slovakia but observers say it did not register a knock-down victory.

Most big cities go to Smer

The results from the mayoral races in most of Slovakia’s eight regional capitals, including its two biggest cities, Bratislava and Košice, as well as Smer’s successes in many towns and villages provided good reasons for the party to celebrate.

Voters in Bratislava for the first time gave their votes to a left-wing candidate when they elected Milan Ftáčnik, an independent candidate who ran with Smer’s backing.

Košice residents will see their incumbent mayor, František Knapík, who was supported by a coalition of the Slovak Democratic and Christian Union (SDKÚ), the Christian Democratic Movement (KDH), the Hungarian Coalition Party (SMK), the Civic Conservative Party (OKS) and the Greens, depart after being defeated by former health minister Richard Raši of Smer who also had the endorsement of Most-Híd party.

Centre-right parties lost the mayoral position in Žilina where incumbent mayor Ivan Harman was voted out in favour of Smer’s Igor Choma, the former head of Slovakia’s National Highway Company.

Trenčín residents elected Richard Rybníček, a former director of public broadcaster STV, who ran as an independent candidate but was endorsed by Smer in the last moments before the election. He defeated Branislav Celler who had the support of the SDKÚ and Most-Híd.
One regional capital to re-confirm its centre-right orientation was Trnava, whose citizens re-elected a candidate from the Christian Democratic Movement (KDH), Vladimír Butko, who had previously served as the city’s deputy mayor under Štefan Bošnák of KDH. The outgoing mayor supported his deputy in the race. Bystrík Stanko, an independent candidate who had the support of Smer, finished second.

Banská Bystrica was the only regional capital that elected an independent candidate who was backed by the centre-right parties. Independent Peter Gogola will become the mayor after defeating Smer candidate Ľubomír Vážny, who served as transport minister in the previous Smer-led government.

Two regional capitals will keep their incumbent mayors. Jozef Dvonč will stay in the mayoral seat in Nitra, supported by a broad cross-party coalition of Smer, KDH, the Slovak National Party (SNS) and the Greens. And in Prešov, independent candidate Pavel Hagyari was re-elected.

Following the initial publication of the election results, Slovak media reported that Smer was a clear winner in the elections, referencing the fact that five out of Slovakia’s eight regional capitals will be governed by a candidate nominated or supported by Smer.

According to the official election results, Smer won 599 mayoral races, 200 more than in 2006. This total includes only candidates who ran exclusively under the banner of Smer and who were not part of any coalition.

When it became clear that centre-right candidate Magdaléna Vášáryová had lost the mayoral race in Bratislava, she and her party leader, Mikuláš Dzurinda of the SDKÚ, stood in front of journalists and admitted defeat.

“I perceive the 2010 municipal elections as a defeat,” Dzurinda said, adding that left-wing parties were much more successful than the centre-right parties.

Observers, however, do not completely share Dzurinda’s opinion. Sociologist Pavel Haulík stated that there seems to be no doubt about Smer’s success in the municipal elections but added some caveats.

“The question is what the victory is like and whether it is different from the victory of Smer in the parliamentary election, which they won, but after which they were not able to form the government,” Haulík said in a post-election interview with The Slovak Spectator.

Haulík said Smer’s victory looks bigger than it actually is – mainly due to the majority voting system used for the municipal elections but also because of the good marketing and strategy that the party used in the election campaign, as Smer ran an enormous number of candidates and did not hesitate to drop a candidate if the polls indicated a low chance of success and instead supported an independent candidate in order to increase the final number of winning candidates under Smer’s column.

Political analyst Darina Malová believes that apart from the inability of the centre-right parties to unite behind a joint candidate in many of the municipal races, another reason for their ineffective showing stems from voters' tendency to treat municipal or European parliamentary elections as being of secondary importance.

“In those [elections], voters send a signal to the government about their discontent,” Malová told The Slovak Spectator. “Such behaviour, characteristic of western Europe, is becoming typical in Slovakia too.”

In the aftermath of the municipal elections, criticism rained down on the parties of the state-level governing coalition for their inability to join forces in many municipalities.

Political analyst Grigorij Mesežnikov mentioned Košice as an instructive example of how that disunity worked in practice: an independent candidate with a rightist profile, Marek Kažimír, ran against incumbent mayor Knapík, who was supported by three ruling parliamentary parties, in a race which also included Smer’s candidate, Richard Raši, who strangely captured the support of Most-Híd of the ruling coalition. Raši came out on top.

The final countrywide turnout of 49.69 percent, an increase of 2 percentage points compared with the 2006 municipal elections, generated some optimism among observers.

Haulík, though he admitted that the number is rather low for municipal elections in general, said that the elections were fairly successful.

“One should see that in these municipal elections, just like in all the elections of this election cycle, starting from the regional elections [in 2009], the declining trend in turnout numbers has stopped,” Haulík said. He noted that there had been a constant fall in the numbers participating between 1999 and 2006 in all types of elections.