ANOTHER attempt by MPs to select Slovakia’s next general prosecutor, and fill one of the most powerful positions in the country, failed on December 2, leading to renewed tensions within the ruling coalition. 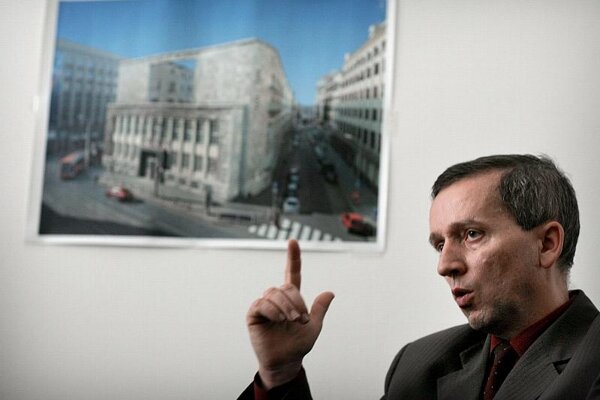 Jozef Čentéš was not selected in the December 2 vote. (Source: SME)
Font size:A-|A+0

ANOTHER attempt by MPs to select Slovakia’s next general prosecutor, and fill one of the most powerful positions in the country, failed on December 2, leading to renewed tensions within the ruling coalition.

Coalition MPs’ failure to select Jozef Čentéš, the joint candidate agreed by their party leaders, in a secret ballot was followed by confusion and denials about what went wrong. Incumbent general prosecutor Dobroslav Trnka received 74 votes, meaning that at least three ruling coalition candidates must have supported him.

Seventy-three MPs voted for Čentéš and two votes were classed as invalid, according to the SITA newswire. To be selected, a candidate needs the support of a majority of all deputies present. Since 149 deputies were in attendance for the vote, 75 votes were needed to triumph and both candidates fell just short. The coalition normally commands 79 votes in parliament.

Coalition leaders agreed to hold a re-run of the vote with the same two candidates on Tuesday, December 7.

It wasn't us, SDKÚ insists

The Slovak Democratic and Christian Union (SDKÚ) said that the party was disappointed at the result, but caucus leader Jozef Mikuš said that Čentéš had convinced SDKÚ deputies that he was the right candidate and that all of the party’s 28 votes had been cast for him.

One day before the vote, Prime Minister Iveta Radičová had reconfirmed an earlier statement that she would consider resigning if Trnka were re-elected.

“We need the change because of the citizens, so that they start believing again that in Slovakia the rule of law works,” Radičová said, as quoted by the Sme daily.

Yet Smer leader Robert Fico, who admitted that the vote had taken him by surprise, said that Smer would challenge the December 2 vote with the Constitutional Court over what he called interventions in the vote.

“Ridiculing democracy” is how Fico described behaviour by ruling coalition deputies, especially those from Freedom and Solidarity (SaS) who were seen photographing their voting sheets in order to be able to prove that they did not support Trnka in the supposedly secret ballot.

Fico also complained that some coalition deputies had cast their ballots in pairs and said such “undemocratic” ways of voting had not been witnessed even in the former federal Czechoslovak parliament.

It wasn't us either, KDH, Most-Híd declare

Meanwhile, the Christian Democratic Movement (KDH) said it wanted to make the next vote to select the general prosecutor a public one. KDH caucus leader Pavol Hrušovský said he was convinced that all his party’s deputies had voted for Čentéš.

“I guarantee that deputies of the KDH voted for the candidate the ruling coalition agreed on,” Hrušovský said, as quoted by SITA, but refused to speculate about who the errant coalition MPs might have been.

Hrušovský said he was surprised that the ruling coalition had failed in such a crucial issue for the second time, referring to a previous vote in November which was inconclusive.

He also insisted that it is crucial to know which deputies voted against the agreed nominee, as distrust within the ruling coalition would be the worst outcome.

Béla Bugár, leader of Most-Hid, echoed Mikuš and Hrušovský by assuring the public that all his party’s deputies had voted for Čentéš.

Bugár admitted he was disappointed at the result of the vote: “Of course I am edgy. Agreements are not kept and thus it makes no sense to produce agreements.” Bugár added that one can only guess who would benefit if the prime minister resigns.

This round of selection for the next general prosecutor has been plagued with problems from the beginning. In November, Trnka was unexpectedly proposed by a lone SDKÚ deputy, Stanislav Janiš. Then Smer deputy Mojmír Mamojka also nominated Trnka.

In the first round, held in early November and involving 148 MPs, Trnka attracted 70 “yes” and 60 “no” votes, with 17 deputies abstaining; Mária Mišíková, backed by the KDH, SaS and Most-Híd, was backed by 49 MPs and opposed by 84, while 14 abstained.

Ján Hrivnák, nominated by the SDKÚ was supported by 28 deputies, while 98 voted against him and 21 abstained.

At that time, deputies were also observed using mobile phone cameras to photograph their filled-in ballot papers. Smer protested then too.

However, SDKÚ MPs then blocked the run-off between Mišíková and Trnka by registering for the ballot but not casting any votes, thus ensuring that neither of them received a majority among those MPs present.