TENSIONS within the ruling centre-right coalition have been spiced up ahead of the forthcoming parliamentary vote on the state budget, one of the most important tasks facing the government before the end of the year. After four MPs from the Christian Democratic Movement (KDH) abstained from voting on December 1 on a bill that would have increased the excise tax on beer, the coalition’s failure to maintain discipline among its deputies has raised the hackles of the prime minister. 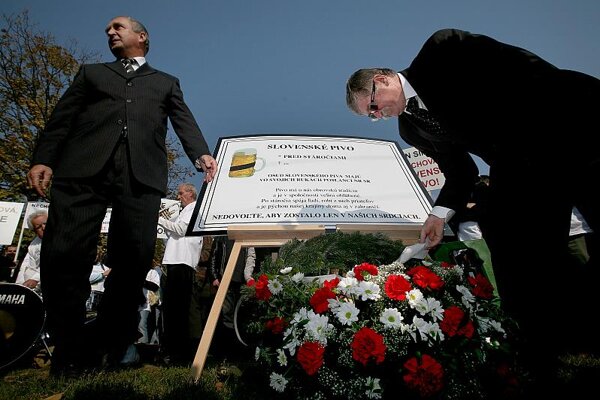 TENSIONS within the ruling centre-right coalition have been spiced up ahead of the forthcoming parliamentary vote on the state budget, one of the most important tasks facing the government before the end of the year. After four MPs from the Christian Democratic Movement (KDH) abstained from voting on December 1 on a bill that would have increased the excise tax on beer, the coalition’s failure to maintain discipline among its deputies has raised the hackles of the prime minister.

Prime Minister Iveta Radičová summoned an unscheduled meeting of the four-party Coalition Council after the excise tax increase failed in parliament. The prime minister’s message at the meeting was clear: the coalition government will not fold over the failed tax hike on the golden liquid, but the expected €14 million shortfall in state tax revenues will be covered from the budgets of ministries managed by KDH representatives.

KDH responded that the coalition agreement was violated by individual deputies rather than by the party or by the KDH deputy caucus.

The head of the KDH caucus, Pavol Hrušovský, said that he does not want a similar split vote to emerge again, the SITA newswire reported. The ministries of transport, health and interior will now see their budgets trimmed to make up for the shortfall due to the failed hike in the beer tax. This may lead to more dissent and an even thornier vote when the proposed state budget reaches the floor of parliament.

The ruling coalition reached the final agreement on the details of the draft budget on November 25, when it ironed out a few open issues. The draft budget calls for state revenues of €13.1 billion and expenditures of €16.9 billion. The overall public finance deficit, which includes the budgets of health insurers, universities, local governments and the social insurer Sociálna Poisťovňa, should drop to 4.9 percent of GDP in 2011 from this year’s predicted 7.8 percent, according to the government.

"The government is submitting laws and a budget to parliament aimed at curtailing next year's state deficit by 2.5 percent [of GDP], or €1.7 billion, in order to spread out the burden in an even and fair manner while minimising the impact on low-income families and citizens," said Radičová on November 25, as quoted by the TASR newswire.

Radičová also said that more funds will flow into family policies with the coalition presenting an increase in maternity benefits as well as an extension of the period during which mothers will be eligible to receive them.

The draft state budget went to parliament without the agreement of the government’s social partners, the trade unions and employer associations.

Otto Ewiak, spokesman for the Confederation of Trade Unions (KOZ), said that the unions are not against consolidation of public finances or a balanced budget but they object if the highest burden of trimming the budget is carried by employees and those from weaker social groups.

Ewiak told The Slovak Spectator: “KOZ in this connection is asking the question: the rescue of the banks was paid for by citizens, now the austerity measure package will be paid by citizens; who will rescue them?”

“According to our calculations, the government’s austerity measures will increase costs for a four-person family by as much as €400 annually, which is almost equal to [an average] one-month salary,” Ewiak said.

Ewiak said the unions have been trying unsuccessfully to persuade the government that more well-off groups within society and businesses should pay for a bigger share of the austerity measures.

Ewiak also said that KOZ has doubts about the firmness of the ruling coalition plans to balance the state budget.

“Many things have been proposed and then changed,” Ewiak said.

Several last-minute changes were made in the ruling coalition’s budget proposal, TASR reported. One was to include an individual’s income derived from dividends into the base on which mandatory health care insurance payments are calculated. Another was to drop the coalition’s original proposal to levy taxes on contributions made into the voluntary, third pillar of the pension system.

The final budget proposal also lowered the amount that the state will contribute for health insurance for certain groups of people to 4.32 percent of the average salary in Slovakia.

In overall terms, however, Radičová said the health-care sector will receive 2.1 percent more funding in 2011 than in 2010.

Peter Gonda of the Conservative Institute of M.R Štefánik, a think tank, said that from the point of view of solving the serious public finance problems and their causes, the cabinet’s draft budget is “too cautious, not ambitious enough, politically scared, and does not thoroughly address the root causes of the budget problems”.

Gonda stated that the proposed budget does not reduce the public finance deficit sufficiently and also brings an increased level of obligatory financial burden on citizens through higher tax burdens rather than by making more significant cuts in expenditures.

“The government is relying on increased revenues into the budget and is not focusing on an overall drop in public spending,” Gonda said.