Slovakia is prepared to handle a potential gas-supply crisis

THE RECENT chilly weather in Slovakia has recalled January 2009, when natural gas supplies from Russia via Ukraine were halted completely for about two weeks as a result of a pricing row between Moscow and Kiev. And although the threat of a repeat has receded following news that Russian energy giant Gazprom and its Ukrainian counterpart Naftogaz have agreed to settle a gas dispute dating back to 2008-09, as reported by Reuters on November 29, companies involved in the transport and distribution of natural gas in Slovakia report they are prepared for a crisis. 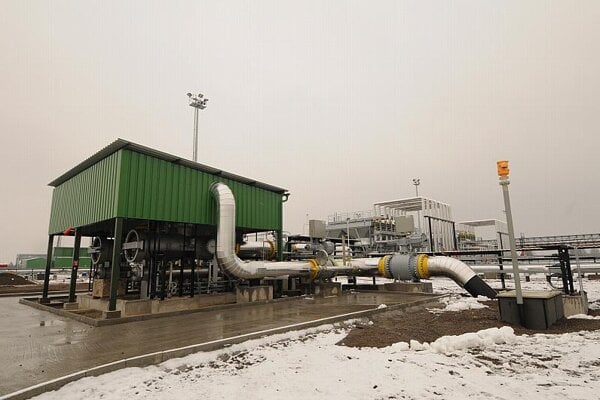 THE RECENT chilly weather in Slovakia has recalled January 2009, when natural gas supplies from Russia via Ukraine were halted completely for about two weeks as a result of a pricing row between Moscow and Kiev. And although the threat of a repeat has receded following news that Russian energy giant Gazprom and its Ukrainian counterpart Naftogaz have agreed to settle a gas dispute dating back to 2008-09, as reported by Reuters on November 29, companies involved in the transport and distribution of natural gas in Slovakia report they are prepared for a crisis.

“We expect that the upcoming winter will be, from the viewpoint of gas supplies from the Russian Federation to Slovakia, without any problems,” Ondrej Šebesta, spokesperson for Slovakia’s main natural gas utility Slovenský Plynárenský Priemysel (SPP), told The Slovak Spectator.

“Nevertheless, in the event of reduced or completely halted supplies of natural gas from Russia, and if there is little gas [available] via the spot markets or it is extremely expensive, SPP is able and prepared to secure gas supplies for all its customers, including large industrial clients, without any limitations.”

SPP is now able to face a potential gas crisis thanks to three key measures which it adopted after the January 2009 crisis. Šebesta explained that SPP has a diversified portfolio of resources, including gas supplies from the west; that SPP is affiliated to the Eustream system transporting natural gas within Slovakia and via Slovakia to European markets, which can if necessary be put into reverse flow (i.e. to supply gas west-to-east); and that the company has stored large volumes of gas in underground facilities.

As early as this September the Economy Ministry announced that Slovakia would be well-prepared for a winter halt in gas supplies, if one were to occur. A report on securing energy supplies elaborated by the Economy Ministry states, as reported by the SITA newswire, that the country will have sufficient reserves of natural gas along with contracted auxiliary supplies to last from November 1, 2010 to March 31, 2011.

“The Slovak Republic is better prepared for a disruption of gas shipments from Russia via Ukraine similar to that which occurred in January 2009,” reads the report.

In mid August gas storage facilities managed by the companies Nafta, Pozagas, and SPP Bohemia stored 2.65 billion cubic metres of gas, 80 percent of their total capacity, according to SITA.

In the event of a gas crisis, Slovakia can also rely on auxiliary supplies of gas. The respective contracts were signed between SPP and energy companies E.ON Ruhrgas and GDF Suez following the 2009 gas crisis. Based on the contracts, these companies – which, along with Nafta, are major shareholders in SPP – will supply SPP with up to 1 billion cubic metres of gas a year.

“The long-term diversification contracts with GDF Suez and E.ON Ruhrgas have significantly reduced the dependence of Slovakia on a single source of natural gas,” Šebesta of SPP said. “In case of an emergency situation SPP is now able to cover over 20 percent of natural gas consumption from non-Russian sources. Along with full underground storage facilities this represents a sound base for the smooth and reliable supply of SPP clients with gas even in the event of extraordinary or unpredictable situations.”

If necessary, gas from the above companies will be shipped to Slovakia via reverse flow from the Czech Republic. Slovakia can also take natural gas from Austria after OMV completed a reverse-flow project at its gas hub in Baumgarten, in eastern Austria, in late October, SITA reported. Half of the €4-million cost of the OMV project was provided by the European Commission, with the Austrian energy firm covering the rest.

Since the gas crisis the Slovak government has tightened rules for gas distributors. They are now obliged to follow a so-called security standard requiring that they guarantee gas supplies to their clients for up to 30 days in the event that the flow of natural gas from Russia is halted. They can do this either by storing gas in underground facilities or by signing contracts for reverse gas flow supplies, according to Nafta director-general Martin Hollý.

Nafta, the key operator of natural gas reservoirs in Slovakia, reported on November 29 that its underground gas storage facilities are almost 100-percent full. Its aggregate capacity is 2.2 billion cubic metres, and only about 20 million cubic metres of storage capacity remains unused.

“We are prepared to fulfil the requirements of the market and of customers,” Peter Kučera, director of sales and marketing at Nafta, said on November 29.

Nafta stores gas in depleted porous hydrocarbon deposits which formerly held natural gas and crude oil. As natural gas is widely used for heating in Slovakia, storage occurs seasonally: during the summer season, when consumption is low, gas is injected under high pressure into the storage facilities. During the winter, as gas consumption increases, it is with-drawn.

Even before the 2009 crisis Nafta made a strategic decision to build a new underground gas storage facility. In 2007 it decided to turn a depleted hydrocarbon deposit at Gajary-Báden in western Slovakia into a new storage facility in three phases, at a cost of €166 million. The total storage capacity of the facility is projected to be 500 million cubic metres, increasing Nafta’s aggregate storage capacity to 2.5 billion cubic metres.

The first phase of the project was completed in May 2008. The second, most important phase of the project, comprising over two thirds of the project’s costs, should be completed during the second quarter of 2011. After this phase is complete, the aggregate storage capacity of Nafta should increase to 2.3 billion cubic metres. This phase includes construction of a gas distribution centre for the Gajary-Báden facility as well as gas treatment facilities.

Nafta received financial support from the European Union of €3 million to connect the storage facility at Gajary-Báden with another at Láb, Nafta director-general Martin Hollý said.

“Over the last five years we have ‘sold’ 2.5 billion cubic metres of storage capacities,” Hollý said, adding that due to the development of the gas market, and its liberalisation, Nafta’s client base has increased from two in 2003 to 11 now. Since Slovakia’s gas transport network is interconnected with the Czech Republic and Austria, and plans exist to link it to Hungary as well, Nafta faces international competition. Nafta stores gas for clients from the Czech Republic, Austria, Germany, France and elsewhere.

Liberalisation of the gas market and development of spot markets for natural gas have changed the requirements of individual participants in the gas market. In the field of storage there is growing demand for more flexible and short-term products, with terms of up to one year. According to Nafta, these trends should be supported by more flexible regulatory mechanisms, which were tightened after the gas crisis.

“The price regulation of storage services does not meet the current requirements of the gas market; its administrative demands prolong the process of completing a storage capacity bid by three months,” said Hollý. “Experience from tenders and bench-market analyses thus far show that market mechanisms regulate the price for storage services sufficiently. Thus price regulation represents a barrier to further development of the gas market.”

According to Hollý, Nafta representatives have pointed out that price regulation is a brake on the further development of the gas market in Slovakia and have received a sympathetic response from state authorities for their efforts to create more flexible conditions for gas storage clients.