AFTER the global economic crisis hit Slovakia, concern arose that companies would severely curb their philanthropic programmes. Experience has not confirmed that dark expectation and companies, rather than throttling down their help, only began to consider more carefully how their financial assistance was to be used and whether it would be effective. After allowing for the impacts of the crisis on company revenues and profits, corporate philanthropy in Slovakia has been finding a firmer and firmer footing and is becoming part of the DNA of an increasing number of businesses. And 20 years after the market economy came to Slovakia, a significant number of business executives, after acquiring significant wealth, are searching for ways to add new dimensions to their lives through philanthropy. 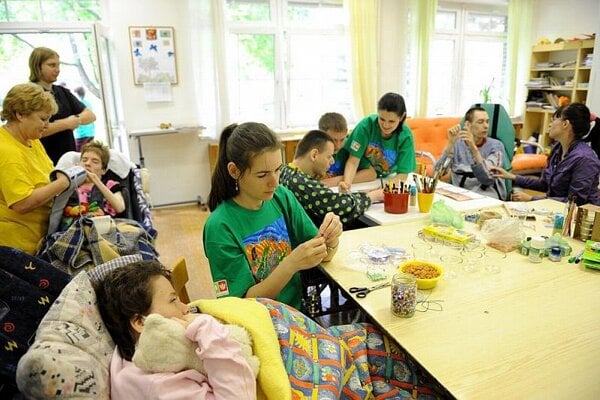 Employees are donating their time to help others. (Source: Pontis)
Font size:A-|A+

AFTER the global economic crisis hit Slovakia, concern arose that companies would severely curb their philanthropic programmes. Experience has not confirmed that dark expectation and companies, rather than throttling down their help, only began to consider more carefully how their financial assistance was to be used and whether it would be effective. After allowing for the impacts of the crisis on company revenues and profits, corporate philanthropy in Slovakia has been finding a firmer and firmer footing and is becoming part of the DNA of an increasing number of businesses. And 20 years after the market economy came to Slovakia, a significant number of business executives, after acquiring significant wealth, are searching for ways to add new dimensions to their lives through philanthropy.

The perspective of the Slovak Donors’ Forum is similarly positive.

“During the last few years the concept of corporate engagement has become an expected part of the strategic planning of each company,” Katarína Podracká, project manager at the Slovak Donors’ Forum told The Slovak Spectator. “Corporate social responsibility and corporate philanthropy as its integral part are more and more recognised as a progressive way for interconnection of the commercial sphere and society.”

More and more Slovak companies have begun to donate funds or their products, services and employees’ time to good causes. Hrica sees two factors influencing this trend: the possibility for a firm to designate 2 percent of its corporate income tax to a charity of its choice, and the economic crisis. Each individual taxpayer as well as businesses in Slovakia can designate an NGO to which the state will transfer 2 percent of the person’s or firm’s income tax.

The global economic crisis reduced company profits and hence the amount of money transferred to NGOs under the income tax designation. Economic hard times have also forced some companies to cut back spending on philanthropy but the crisis has generated some new ideas and trends as well.

“An unambiguous trend is an effort for effectiveness, measurement and multiplication impact from donated funds,” said Hrica. “Because companies now ‘turn each euro three times before they put it away’, they want to see how their donation has helped and what it has contributed to.”

Another trend is more and more engagement of companies’ employees in volunteering – also during normal working hours. According to Hrica, five years ago volunteering by employees was something of a rarity in Slovakia but now it is almost standard procedure in large companies.

“Managers see that at least part of their staff like such activities and see the sense in them doing so. This also supports a positive culture and atmosphere in the company,” Hrica said, adding that gradually the manual types of help coming from volunteering employees will gravitate to more sophisticated support, for example in IT consultancy, marketing, law, finances, management and so on. “For example, at Pontis we have recently started a programme called Helping Heads in which companies have already engaged their employees to help the community with such skill-based volunteering.”

Hrica added that law firms already offer pro bono programmes through which they provide their services free of charge for good causes and that other companies are more often seeking opportunities to donate their products, either new or used, or ones nearing their shelf expiration date to worthy causes.

“New individual philanthropists, owners of successful companies, who have gotten rich and who now want to give their personal time and money to a higher cause have also started to surface,” said Hrica.

A survey about corporate philanthropy in Slovakia which the Slovak Donors’ Forum conducted in October 2010 shows that almost one half of companies were forced to consider donations other than cash due to the economic crisis and that 41 percent of companies curbed their cash donations. One third of companies stated that they had maintained their previous budgets but that they were putting more stress on the effectiveness of their donated funds, Podracká said. One fifth of surveyed companies reported that the economic crisis did not have any significant impact on their philanthropic activities.

“From our point of view this is a very positive trend [switching from financial to non-financial donations], which contributed to a deepening of relations between companies and NGOs, to building of long-term inter-sectoral partnerships, and to more significant engagement by employees,” said Podracká.

Expectations that the crisis would significantly affect the particular philanthropic areas that companies supported and focus would shift more to projects only helping socially dependent groups have not come to pass, according to Podracká. The survey found that 74 percent of the companies reported that they continued supporting the same kinds of activities as in the past and they were not considering switching to other areas.

Views from the corporate sector

The activities of various companies confirm that philanthropy has become second nature to them. Anasoft, which is active in the IT field, has collected a number of awards for its corporate social responsibility (CSR) philosophy and its philanthropic activities.

“We have supported various activities,” Jana Ohrablová, Anasoft’s public relations and marketing manager, told The Slovak Spectator. “In the end we made a strategic decision to support three main fields [family, children, and education and literature]. Philanthropy is part of our general CSR strategy, which includes the behaviour of our company towards society, the environment and employees.”

Several companies in Slovakia have also adopted less common themes for their philanthropy. The Slovak arm of Accenture, for example, supports social work with people who have committed crimes and were imprisoned. In March Accenture received honourable mention in the Via Bona competition for its courage in supporting the education and re-integration of former prisoners back into society through its support of the Maják (Lighthouse) civic association.

“We recognise the honourable mention especially as an acknowledgement of the self-sacrificing work of the civic association Maják and its head Martina Justová,” Marek Gešo of Accenture told The Slovak Spectator, adding that the staff at Maják are the real heroes who each day do miracles in their work and use Accenture’s financial donation very effectively.

When assessing what philanthropy is and what it means in Slovakia, Hrica pointed out that not all companies have fully comprehended the concept and how it relates to their other responsibilities.

“We still see mixing of the 2-percent income tax designation with being a donor or being a donor with sponsoring and the latter is a marketing tool and not philanthropy,” said Hrica. “One should realise that a company cannot expect a counter-value for a donation and that it cannot even include it into its costs. Another general problem which we are also fighting is mistaking philanthropy and charity with corporate responsibility. Responsibility to the community and making donations are only one part of corporate responsibility. But it is equally important that a company is responsible to its clients, employees, suppliers, and others. A Christmas present for an orphanage does not fulfil this responsibility.”