Shocked by the sights of Šomoška

THERE are few thrills as disorienting as crossing the borders of nations. But this border has no fence, no checkpoint, no border police. The magic of the European Union in the heart of the continent: a small stream and a rusty sign are the only markers of an international line. This is the start of my surprising hike to Šomoška Castle, nestled snug on the Slovak-Hungarian border. 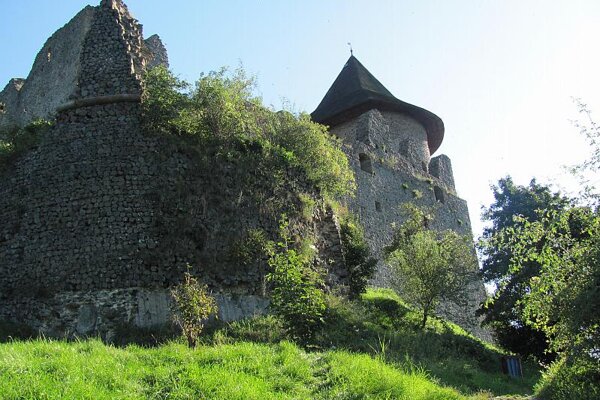 THERE are few thrills as disorienting as crossing the borders of nations. But this border has no fence, no checkpoint, no border police. The magic of the European Union in the heart of the continent: a small stream and a rusty sign are the only markers of an international line. This is the start of my surprising hike to Šomoška Castle, nestled snug on the Slovak-Hungarian border.

The first clues that this is no ordinary castle ruin are the clusters of tourists clogging up the narrow paved path from the village of Bukovinka, about 20 kilometres south of Fiľakovo. There is no room to turn a car around and barely enough room for hikers to sneak in a potty break without being exposed. Eventually the trees give way to a parking lot and playground complete with a small kiosk that sells tickets, postcards, beer and cookies. And for another couple of euros the lady of the kiosk will watch over your car because “you never know who’s out there these days”.

After asking how long she would be staying around comes the quick reply: “Till darkness at least.” So it would be possible to buy the porcelain coffee cup with the castle painted on it after returning? “You shouldn’t wait. You never know if we will sell out.”

There were two dusty mugs on the shelf and another four or five neatly stacked in white boxes, next to some magnets and key chains in the cupboard. It didn’t seem prudent to debate, so the souvenir cup was promptly paid for and stowed away in the watched-over car.

Passing spirited children on swings, the trail quickly disappeared into the thick ancient woods. A meadow frees sunshine for a short stretch as dragonflies and butterflies compete for wild flowers amongst hundreds of clovers (including a four-leaf one!) amidst tall grass. Back into the dark woods, a two-step wide stream marks the border. The wonder of Google maps show that indeed the trail follows the sharp turns and straight lines of the international border between Slovakia and Hungary, right where that stream meanders.

After passing some man-made ponds, created for reasons not really coherently explained by the info tablets, the trail ascends a steep ridge with the top of Šomoška castle faintly visible behind the treetops. Here is the first shocker, a sea of stones covering the slope. Each stone ranges in size from about a baseball in diameter to slabs the size of a laptop computer. The castle pamphlet literature writes that the scattered stones cover a 40 x 100-metre area and indeed the ‘stone sea’ comparison is an apt description.

The next wonder rises over nine metres above the stone sea creating a wonderful illusion of a waterfall, except made of stone. Columns of stone consisting of volcanic basalt flow vertically in a row. Some of the stone columns have splintered off near the top making it appear that they are frozen in midair, like water tumbling over. Volcanic activity four million years ago created this one-of-a-kind natural phenomenon.

Šomoška castle again becomes the focal point just a five-minute walk later. Built in the 14th century, the castle’s purpose was to guard the gateway to the lucrative mining towns in the Slovak lands – Kremnica, Banská Štiavnica and Brezno. But the Ottoman invasion led to the capitulation of the castle in 1552.

Legends persist of Šomoška’s downfall. One story tells of a dashing young captain’s misadventure trying to secure the beautiful woman he loved for marriage. Distraught that the parents of the girl he loved planned to marry their daughter to another suitor, the captain waited helplessly planning the defence of the castle as the Ottomans lay siege below. As the day drew nearer when he would lose his love forever, the captain decided to sneak out of the castle at night, bring his beloved back to the castle where they could be together. But when the guards saw that their captain was leaving the castle, they took it that he was abandoning the fight, so they too fled. The Ottomans – wise to the whole drama – kidnapped the girl, killed the captain and easily walked into the castle without a fight, occupying it for another 20 years. It is said you can still hear their laughing in the castle walls.

The well-fortified walls and steep cliffs around the castle would have presented a formidable obstacle to the 16th-century invaders. In the 21st century only your leg muscles are tested by the climb. Though it’s tempting to circumvent the entrance by following a thinly worn dirt path around to the left under another stone arch, be warned that this dead end leads to a wooden outhouse. Imagination ponders whether the WC serves as some kind of secret passageway; the putrid smell suggests that it does not.

At the entrance, a cramped wooden hut with an older gentleman selling tickets, postcards, and souvenirs, waves you up stairs and across a wooden gangway to an archway leading inside the castle walls. More than a few bees sail across the narrow wooden bridge so it is a relief to reach the archway.

The ruin layout has its share of reconstructed stairwells, walls, and tunnels with the highlight being the climb to the tall circular bastion tower that is the target of all onlookers from afar.

The outward view through window openings that you can stand in is mutually pleasing: 360 degrees of gorgeous hilly, wooded countryside, neat farms and red-roofed villages. South in Hungary – right under the castle – is the village of Somoskő. To the east and a little north the stream cuts back through the hills, the line found on any map today, back to the origin of my hike.