SLOVAK POST was chosen as the top exhibitor at the Portugal 2010 – World Philatelic Exhibition in Lisbon in the category of postal operators-issuers of postage stamps. 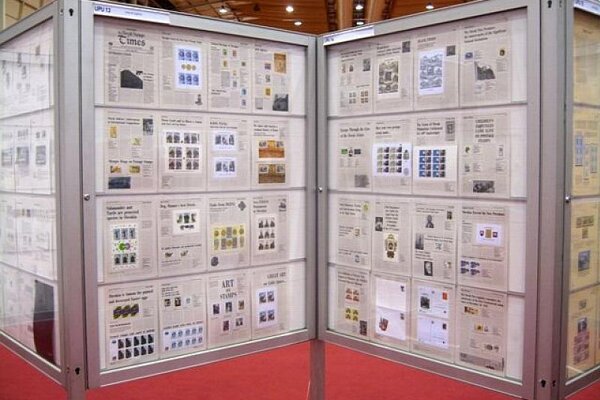 SLOVAK POST was chosen as the top exhibitor at the Portugal 2010 – World Philatelic Exhibition in Lisbon in the category of postal operators-issuers of postage stamps.

Slovak Post attracted attention with its exhibit ň resembling an issue of one of the best-known newspapers in the world, the New York Times. Within the exhibit Slovak Post presented its activities between 2007 and 2009, when the country was preparing for entry into the eurozone.

The exhibition involved 16 countries and Slovakia placed first in a tie with Spain, followed by Portugal and Hungary. Apart from featuring Slovakia’s postage stamps with the new € denomination, stamps featuring the “Cultural Heritage of Slovakia” were presented along with some new design and protective elements. Regular postage stamps with traditional motifs dedicated to personalities, nature, sport, museums, technological monuments and historical anniversaries were also on display.

Several novelties were presented by Slovak Post such as thermal impression printing on polymer foil, used on stamps featuring the Slovak president and the first commemorative euro-denominated Slovak stamp. Another novelty was books of stamps with scents that were issued at Christmas and Easter.

The exhibits in Lisbon were evaluated based on their originality, technological quality and general interest. POFIS (the Postal Philately Service) also participated in the world exhibition with its own kiosk, where it offered stamps and other products to philately connoisseurs and to the general public – the most interesting being the new stamps commemorating the 400th anniversary of the Žilina Synod, the Slovak president, and Žofia Bosniaková.

Slovakia’s newest stamp offerings, which come with with a personalised coupons, were also crowd pleasers – in Lisbon they included the exhibition’s logo along with imprints of various Lisbon monuments, Mária Hormadová of Slovak Post told the SITA newswire.