Slovakia has endured two of the most turbulent years in its contemporary economic history. Or has it? Descriptions full of superlatives, especially negative ones, have flooded the mainstream media in recent years and continue to do so. But assessments of the severity of the recent downturn, and of the economy's current condition, require a pinch of salt. Despite their traditional propensity for pessimism, Slovaks should recognise that the lucky timing of euro adoption, just ahead of the recession, has actually offered some unique opportunities, especially when it comes to attracting foreign investors amid a continuing period of heightened uncertainty. 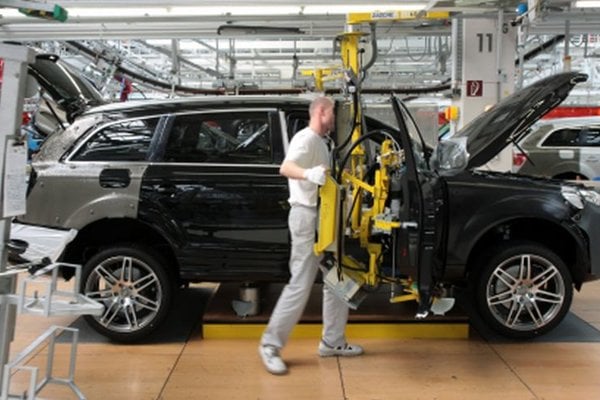 Slovakia has endured two of the most turbulent years in its contemporary economic history. Or has it? Descriptions full of superlatives, especially negative ones, have flooded the mainstream media in recent years and continue to do so. But assessments of the severity of the recent downturn, and of the economy's current condition, require a pinch of salt. Despite their traditional propensity for pessimism, Slovaks should recognise that the lucky timing of euro adoption, just ahead of the recession, has actually offered some unique opportunities, especially when it comes to attracting foreign investors amid a continuing period of heightened uncertainty.

Automotive sector is no curse

Much ado has been made recently about the role that the automotive industry plays in the relatively small Slovak economy. Just as going “from zero to hero” as the biggest per capita car producer in Europe drew the attention of the world's media, all sorts of doom-laden scenarios have been painted with regards to the high concentration of this embattled industry. A meal is not eaten at the temperature it was cooked at, holds a Slovak proverb. The fact is that the presence of three major car manufacturing facilities – in Bratislava, Trnava and Žilina – means that transport equipment makes up almost one fifth of Slovak manufacturing production.

Considered alongside the closely-knit and expanding web of subcontractors and suppliers, the automotive sector is even bigger. Given its cyclical nature and the recent downturn in Europe as well as overseas, concerns about the vulnerability of the Slovak economy have naturally emerged. As seen over the past two years, these worries should not be overblown.

First of all, the level of concentration in Slovak industry is not unusual for this size of economy. Nine major industrial sectors together comprise about 90 percent of Slovakia’s manufacturing output. More importantly though, Slovakia is an instrumental part of what Ewald Nowotny calls the “major structural transformation of the European automotive industry”, which recognises the fact that production of small and medium-sized car models needs to gradually shift to facilities in the new EU member countries, which command cost advantages that can keep such production profitable.

While such transformation provides shareholders (including pension funds) with necessary returns, it also improves the living standard of western Europeans through the availability of small car models at more affordable prices. The oil price bubble in 2007 and 2008, and the subsequent economic slump moreover contributed to what car producers call a “shift in consumer preferences”, which has seen families opt for more efficient (and cheaper) car models as part of the regular renewal of their fleet.

All these factors helped to mitigate the recession's effect on Slovak manufacturers – the most severe impact was recorded in the segment of popular luxury SUVs, of which three brands were manufactured in Bratislava. The shift in consumer preferences together with government car-scrapping bonus schemes contributed to the relatively mild impact of the recession on the two other Slovak facilities.

The announcement, right in the middle of one of the most severe downturns for the global economy in general and the car industry in particular, of a major new investment in a new “family car” assembly line proved that Slovakia provides unique conditions for new investors, and is well-positioned within the ongoing restructuring of the European automotive landscape.
A product portfolio focus on “good cars for bad times” will also act as a type of safety net for the Slovak car industry in a period of slow and still-uncertain recovery.

Wings for the future: Slovak hubs for all of New Europe

The past two years have changed many traditional views of economic theory in general, as well as the concept of economic convergence, in terms of living standards, between eastern and western Europe.

The expectations of eurozone enlargement could be counted among the casualties of the past two years. While as recently as in 2008 it appeared that euro adoption in the neighbouring countries of Central and Eastern Europe (CEE) was just a matter of time (counted in years), at the end of 2010 it is crystal clear that enlargement of the eurozone will be neither as easy nor as speedy as originally envisioned, due to the circumstances of candidate countries as well as those of the eurozone. In the wake of the most severe post-war global recession, the economies of the region are tackling the double whammy of painful and politically unpalatable fiscal consolidation and efforts to rekindle economic growth. Efforts to fulfil euro entry criteria have therefore naturally been shifted to the backburner.

Moreover, turmoil within debt-ridden existing European Monetary Union (EMU) members might influence not only the political will to take on new members fast but also the political eagerness of the new candidates themselves. Given existing international trade relations, with the eurozone being the major export territory for the new EU members, Slovakia will for quite some time stand out as the only country that offers both full membership of the eurozone and at the same time the cost advantages of an emerging market and a geographical location within the 90-million-plus market of the eastern belt of new EU members. Slovakia hence offers an ideal location for cost-effective, emerging-market manufacturing to supply the 330-million eurozone market, as well as a position for building hubs for the likely fast-growing yet more turbulent markets of the new EU members.

There’s no house without a crucifix

Another Slovak proverb holds that there’s no house without a crucifix; a metaphor for worrisomeness.

Just as in other parts of the world, the economic slowdown has sunk the Slovak government's budget deeper into deficit, the consolidation of which was delayed due to 2010 being an election year. Slovakia hence increased its public debt from less than 28 percent of GDP at the end of 2008 to over 42 percent of GDP.

Although this might impose negative pressure on Slovakia's debt rating, the best in the CEE, the commitment of the right-wing cabinet of Prime Minister Iveta Radičová is to bring the annual budget shortfall down to less than 3 percent of GDP (from close to 8 percent of GDP this year) by 2013.

Certainly, with respect to fiscal risks, Slovakia was rather lucky to enter the recession after
several consecutive years of falling public debt, which at the end of 2008 was approximately 10 percentage points lower than the average for similarly rated countries. Hence, while the fiscal situation is an issue, it is certainly not a make-or-break point. Last but not least, Slovakia is the only CEE country covered by the EMU cross-guarantees of the euro rescue fund.

According to a Chinese saying, a crisis is an opportunity. For Slovakia, the turbulence of the past two years acted as catalyst for developments which offer unique opportunities when it comes to foreign direct investment inflows.

The author is the chief analyst of Volksbank Slovensko