November 2009 – The mood in the Slovak economy is continuing to improve. The economic sentiment indicator went up by 2.3 to 77.5 percentage points in October, on a monthly basis, according to the Statistics Office. 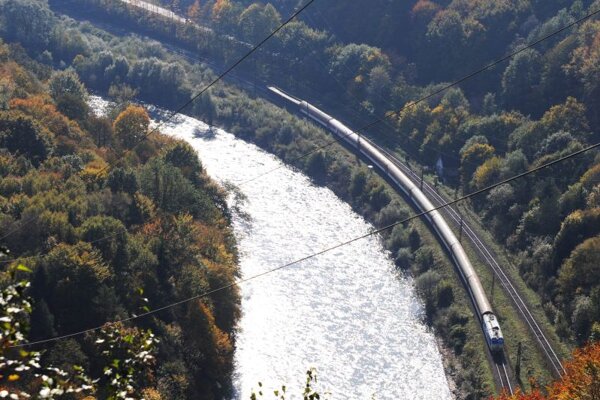 November 2009 – The mood in the Slovak economy is continuing to improve. The economic sentiment indicator went up by 2.3 to 77.5 percentage points in October, on a monthly basis, according to the Statistics Office.

November 2009 – Construction of an industrial and technological park in Trnava was launched. The municipality received a subsidy for the project from the Slovak Investment and Trade Development Agency (SARIO) of 95 percent of eligible expenditures, amounting to €9.59 million. Construction should be completed by September 2011.

November 2009 – President Ivan Gašparovič signed the controversial Strategic Enterprises Act on November 26. This gave the state the right of first refusal to purchase enterprises deemed as strategic that are in bankruptcy proceedings and are important in terms of health protection, state security and the overall performance of the economy until the end of 2010.

November 2009 – Volkswagen’s new small family of cars, the so-called Up! series, will be assembled in the company’s Bratislava factory and has entered its implementation phase.

December 2009 – The approval process for obtaining a loan from the European Investment Bank for the construction of the D1 highway was temporarily suspended due to a complaint from environmental NGOs, who informed the bank about multiple violations of national and international legislation in the planning of a section of the highway.

December 2009 – The ambition of the Slovak government to host the seat of the European energy regulator failed. A vote by EU member states decided on December 6 that the Agency for Cooperation of Energy Regulators will be seated in the Slovenian capital Ljubljana.

December 2009 – The cabinet agreed to the Finance Ministry’s proposal to nominate Jozef Makúch for the post of governor of the National Bank of Slovakia (NBS), the central bank of the Slovak Republic.

January 2010 – Slovakia’s minimum wage increased by 4.1 percent to €307.70 per month as of January 1, in line with a government decision made in October.

January 2010 – Slovakia’s electronic highway toll system began operations on January 1, 2010. Operators of vehicles heavier than 3.5 tonnes, buses and other vehicles holding more than nine people including the driver, are now charged by the kilometre for driving on a total of 2,032 kilometres of Slovak highways and first-class roads.

January 2010 – Economic freedom in Slovakia was ranked 35th among 180 countries worldwide in this year's Index of Economic Freedom survey which was conducted by the Heritage Foundation, a conservative American think tank.

February 2010 – The Slovak Union of Motor Carriers (UNAS) that organised a strike beginning February 1 to force the government to change the rules of the electronic toll collection system and its fees, and to postpone its launch, decided to stop its strike due to nation-wide police intervention against the truck drivers.

February 2010 – Slovakia’s foreign trade balance continued to show a surplus. According to the Statistics Office, Slovakia had a foreign trade surplus of over €67 million in February 2010.
February 2010 – The Polish national airline LOT began flying from Bratislava to its main hub, Warsaw, using a 46-seat, turbo-prop plane every day except Saturday. As many as 60 percent of the total number of LOT’s passengers flying from Bratislava were expected to be trans-Atlantic clients.
February 2010 – The Sheraton Hotel opened as the first building of the new Eurovea centre on the north bank of the Danube River in Bratislava. Sheraton is a global hotel brand and is part of Starwood Hotels & Resorts Worldwide.

March 2010 – The Eurovea Galleria shopping and leisure centre, situated on the Danube River embankment, opened in Bratislava. Eurovea is a project of the Ballymore Group. It houses 160 shops, 30 cafes and restaurants, a fitness centre, cinema and other attractions.

March 2010 – The Transport Ministry and the company Slovenské Diaľnice agreed on the price, method of refinancing, and dates for construction of D1 highway sections between Martin and Prešov within the first package of PPP projects.

April 2010 – Parts of Bratislava Castle were declared open to tourists, ahead of the summer season, after a major reconstruction. The cost of the reconstruction, originally set at €126.1 million, has grown increasingly expensive. Of the €50 million allocated so far, €46.8 million has already been spent.

April 2010 – As of April 1, Slovakia’s public procurement authority no longer has the authority to challenge a government initiated contract in court. The Public Procurement Office (ÚVO) had been able to challenge a contract it thought was questionable by filing a legal action within one year after the contract document was signed.

May 2010 – According to the Spring Forecast 2010-11 published by the European Commission on May 5, Slovakia, along with Poland, should top the ranking of economic growth within the European Union this year.

May 2010 – An almost ten-kilometre Sverepec-Vrtižer section of the D1 highway with an elevated highway above Považská Bystrica was ceremonially opened on May 30.

June 2010 – Robert Šimončič, a previous director general of Microsoft Slovakia and the president of the American Chamber of Commerce (AmCham) in Slovakia was appointed to lead the Slovak Investment and Trade Development Agency (SARIO) as of June 1. He was replaced as the head of AmCham in Slovakia by Michael Smyth, the general director of Dell Bratislava.

June 2010 – Tax freedom day, the symbolic day that marks the last day that taxpayers must work to cover their income tax and other mandatory obligations to the state for the year, was calculated to be June 7, four days later than 2009.

June 2010 – The Fitch group, an international credit ratings agency, stated that if the new coalition government in Slovakia proves stable, cohesive, and able to implement fiscal and structural reforms, the agency might upgrade the country’s rating over the medium term.

June 2010 – According to the Slovak Statistics Office, Slovakia’s GDP increased 4.7 percent
year-to-year in real terms in the second quarter of 2010.

July 2010 – The National Agency for Development of Small and Medium Enterprises (NADSME) launched a project named Support for Innovations in Slovak Small and Medium-sized Companies. The project will last until May 2012 with support from the Competitiveness and Innovation Framework Programme of the European Commission. The aim of the project is to help Slovak SMEs obtain finances which can be used for innovation activities.

August 2010 – Róbert Šimončič, who served as the director-general of SARIO for just a few weeks, was recalled after the new government of Iveta Radičová took power. He was provisionally replaced by Andrea Gulová, who until then led SARIO’s section for direct foreign investments. The Economy Ministry said it expects Šimončič to re-apply for his old job.

August 2010 – The biggest obstacles to running a business in Slovakia are still bribery, weak law enforcement, legislative instability, and high taxes. General satisfaction with business conditions in the country shifted from slightly above-average in 2006 to below-average over the last four years. The findings come from the Report on the State of the Business Environment in Slovakia in 2010, presented by the Slovak Business Alliance (PAS).

August 2010 – Slovakia is one of five potential sites being considered for a large investment project, Remote Administration of Servers and Applications, by US computer giant IBM; if it is chosen, as many as 3,000 Slovaks could get jobs as part of the project within the next three years.

August 2010 – Transport Minister Ján Figeľ (KDH) gave the nod to the contract conclusion between the National Highway Company (NDS) and the Bratislava-based firm, Skanska SK for the construction of a 14-kilometre section of the R4 dual carriageway between Košice and Milhošť, near the border with Hungary.

September 2010 – The government decided to raise the VAT rate from 19 percent to 20 percent as of 2011. It will remain at that level until the public finance deficit falls under 3 percent of GDP.

September 2010 – Transport Minister Ján Figeľ decided not to extend the deadline for financial closure of the first public-private partnership (PPP) package that was to build a 75-kilometre section of highway between Martin and Prešov. The decision by Figeľ killed this PPP project, that had been in process since early 2009. Further, it terminated the actual highway building that would have been done by a consortium involving the construction giants Doprastav and Váhostav-SK.

September 2010 – Slovakia fell 13 places to 60th position in the overall rankings in The Global Competitiveness Report 2010-2011, released on September 9 by the World Economic Forum.
September 2010 – The new head of the National Highway Company (NDS) is Alan Sitár, who will also serve as director general. He replaces Igor Choma, whom the transport minister recalled in July. The new head of the highway company is one of the founders of SARIO.

October 2010 – The Italian company Codognotto Slovensko, which operates in road transport and logistics, was planning to order the building of a logistics centre near Trnava with total construction costs of about €38 million.

6. Dec 2010 at 0:00  | Compiled by Michaela Terenzani with press reports from SITA, TASR and Slovak dailies