Visegrad spirit will resonate within the EU

NEXT year the European Union’s leadership will turn ‘Visegrad-like’ since first Hungary and then Poland will take the wheel of the EU’s rotating presidency. Even though chairing countries are pledged to be impartial this will still serve as a platform from which to present the Visegrad priorities and to showcase its cooperation, said Slovak Foreign Affairs Minister Mikuláš Dzurinda when asked by The Slovak Spectator to share his views on challenges facing the Visegrad Group countries and the contribution the group can make to the region and to the entire EU. 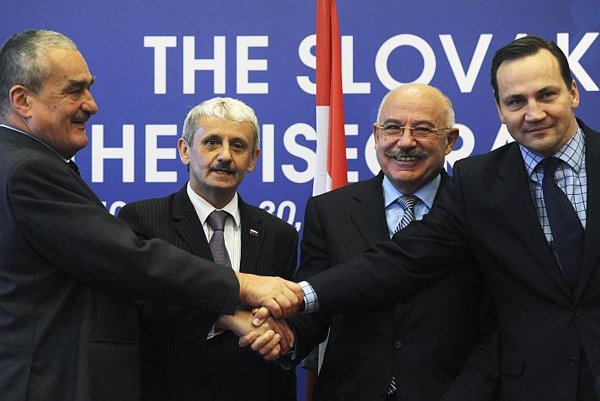 NEXT year the European Union’s leadership will turn ‘Visegrad-like’ since first Hungary and then Poland will take the wheel of the EU’s rotating presidency. Even though chairing countries are pledged to be impartial this will still serve as a platform from which to present the Visegrad priorities and to showcase its cooperation, said Slovak Foreign Affairs Minister Mikuláš Dzurinda when asked by The Slovak Spectator to share his views on challenges facing the Visegrad Group countries and the contribution the group can make to the region and to the entire EU.

The Slovak Spectator (TSS): Slovakia took over the rotating presidency of the Visegrad Group (V4) when the V4 was still struggling with the economic crisis and after three of the four countries had recently changed governments. Will these events have an impact on the Slovak presidency?
Mikuláš Dzurinda (MDZ): Setting off economic growth, pushing down the deficit, and consolidating public finances are the most important tasks of all the Visegrad countries. Also within the V4 we are thus focusing on supporting projects and those forms of regional and cross-border cooperation that contribute not only to easing the impacts of the crisis but also to the revival of economic cooperation.

We are now halfway into our presidency and the crisis remains a great challenge for us. But as with the change of governments after this year’s elections in the V4 countries, the crisis has not impacted the smooth takeover of the chair from the previous Hungarian presidency. V4 cooperation stands on firm ground and therefore the crisis or changes in governments are rather an impulse for boosting this cooperation rather than a reason for worry. This has actually been confirmed even now as Slovakia has brought new dynamics to V4 cooperation: we have strengthened the consultation mechanisms ahead of the meeting of the European Council and other EU bodies at the level of ministers or high departmental representatives.

TSS: Which key topics have been given the strongest emphasis by the Slovak presidency?
MDZ: The slogan of our presidency is Effective Visegrad – Continuity, Coherence, Solidarity and keeping each other informed. In the sphere of foreign policy, we aim to push our shared V4 interests within the European Union in a more effective and more coordinated manner. We have been successfully using the V4 platform for supporting the European and Euro-Atlantic integration of countries of the western Balkans. In October 2010, we hosted in Bratislava an informal extended meeting of foreign affairs ministers of V4, countries of the western Balkans and representatives of the European Commission, which has confirmed support for keeping the dynamic of the open door process of the EU in 2011, when actually two V4 countries, Poland and Hungary, will hold the rotating presidency of the EU.

We plan a similar meeting for next spring called Eastern Partnership and it is intended for our eastern neighbours. A couple of days ago, the V4 foreign affairs ministers turned to the Belgian presidency of the EU and the EU Commissioner for Enlargement with the initiative that the December sitting of the Council for General Affairs recommends that the European Council grant Montenegro the status of candidate country. This decision sent out a strong signal for the whole western Balkans about the continuing interest of the EU in the European future of the region.

In specific sectors, the most important topics are issues of comprehensive infrastructure and energy security with an emphasis on diversification of transit routes and suppliers as well as projects of North-South gas streams and the modernisation of existing pipelines.

The preservation of cohesion policies, support for education and a just agricultural policy as well as the development of neighbourly policies of the EU, are also on our agenda. We are also paying attention to inclusion of the Roma population.

TSS: What is the role of the V4 within the EU? What are the areas where the V4 countries proceed jointly?
MDZ: The success of the V4 depends on our ability to continuously seek common meeting points and to look at our cooperation as a launch platform for seeking additional allies. Our goal is not to create new blocks within the EU, to splinter EU integration or to weaken its unity. After all, it was our EU membership which gave a significant kick to intensifying V4 cooperation. Next year the EU will become “Visegrad-like” since first Hungary and then Poland will hold the rotating presidency. Even though the chairing country has to be impartial it will still be an excellent chance to present Visegrad priorities and showcase our cooperation.

The V4 has the largest potential in strengthening energy security, developing a comprehensive transport infrastructure, and moving forward cohesion policies as well as in finding ways of easing the impacts of the global economic downturn.

TSS: The last century was problematic for the V4 countries from a historical point of view, something which is still reflected in tense relations between countries, specifically Slovakia and Hungary. How can the V4 contribute to reconciliation and improved relations?
MDZ: The last century was problematic for the whole of Europe. Due to the totalitarian lack of freedom, there was no room in central Europe for reflection on the heavy burden of the past. The Visegrad cooperation started symbolically at the place of medieval reconciliation of the then-rulers, which brought stability to the region for several decades. Our purely neighbourly relations have changed again after the centuries into one as allies: we have similar historical experiences and we believe in the same values and principles.

In fact the importance of V4 cooperation could be illustrated by the fact that tensions in bilateral relations with Hungary in the past have not been negatively reflected in the V4. Solutions of bilateral issues do not belong to the V4 ground. On the other hand, I am convinced that that the Visegrad spirit of cooperation has the potential to have a positive impact on relations between individual countries.

TSS: Are the policies of V4 members towards other countries of eastern Europe coordinated?
MDZ: The Eastern Partnership is a programme of the EU which was adopted in May 2009 during the Czech presidency of the EU and it also belongs among Slovakia’s priorities within V4. I consider it a great advantage that all the countries of the V4 devote attention to the Eastern Partnership and support the approach of these countries to the EU.

Slovakia is interested in a specific programme of bilateral support for south-eastern and eastern Europe which is called the Centre for Transfer of Experiences from Integration Processes, which will be open also for cooperation with other partners, including the V4 countries.

Also, the shared V4 goal is to continue the process of visa liberalisation for citizens of the countries of the Eastern Partnership. We see space for cooperation in the area of official developmental help or through projects financed from the Visegrad Fund.

Zuzana Vilikovská contributed to this article