WHEN entering the European Union in 2004, the Visegrad Group countries were more or less homogeneous in their development paths. This cannot be considered true any longer as each of the economies in the central European region are now formulating different economic strategies under the changed domestic and international conditions and the deep economic crisis over the past two years has required significant adjustments by all four countries. 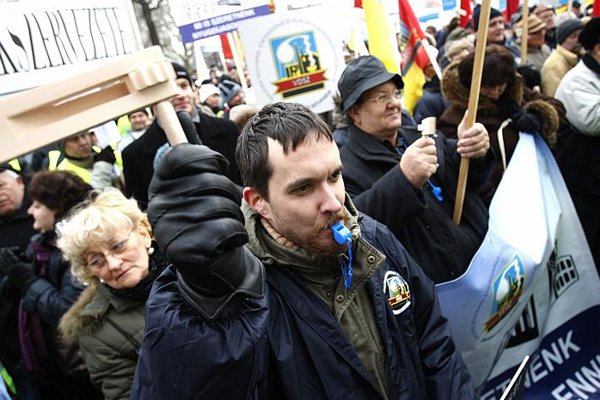 WHEN entering the European Union in 2004, the Visegrad Group countries were more or less homogeneous in their development paths. This cannot be considered true any longer as each of the economies in the central European region are now formulating different economic strategies under the changed domestic and international conditions and the deep economic crisis over the past two years has required significant adjustments by all four countries.

The development of the Hungarian economy has diverged from the other Visegrad countries in the last few years. This principally manifested itself in a substantial slowdown in economic growth even as early as 2006-2007, well before the global financial and economic crisis unfolded. Hungary’s lag in growth is most evident and is well-documented when compared to the development of the other states that joined the EU in 2004. The impacts of Hungary’s adverse developments have been clearly visible in international comparisons and they increasingly point towards a long-term trend that could be difficult to reverse. This also means that the homogeneity that existed among Visegrad group countries in their development paths upon entering the EU has, in many respects, ceased.

From the perspective of growth and convergence based on both internal factors (investments, consumption) and external factors (capital flows, trade) it is evident that the new member states which have coped better with the crisis are those which had produced high but not overheated growth since accession, coupled with an appropriate level of external and internal financial stability, a low budget deficit and a healthy public debt indicator. In the case of Poland, an additional factor prevented a larger downturn: credit-based consumption and investment was much more widespread in other countries in the wider central European region than in Poland, in which the financial deepening was slower. In other states where credit was the most important factor in increasing demand, the sudden crash in the financial markets resulted in a demand shock, or in other words that overconsumption had to be adjusted to the available income. This shock was much bigger in other countries than in Poland.

The economies in the central European region are formulating different economic strategies under the changed domestic and international conditions. These strategies can be seen as different from the recent past in two aspects. The first is that achieving fiscal balance is becoming a number one priority and the second is that growth should be based much more on savings rather than easy credit. These aspects are affecting the region’s countries differently because they did not start at an identical initial position but nevertheless the mainstream of the ‘new’ economic policy points in these directions.

The deepening crisis over the past two years has required significant adjustment from all four countries. This has meant either improving their budget position or their external equilibrium, which everywhere goes hand-in-hand with a decline in economic output and a rise in unemployment. Stabilising the situation essentially depends on how the international funding situation pans out. A protracted crisis triggers structural reforms and significant adjustments more quickly for countries which were in a worse position from a long-term economic development perspective. This is why the conditions for long-term growth may turn out favourably in the countries most affected – presuming they follow a satisfactory economic policy. Nevertheless, this may have severe social consequences in the Baltic states and it cannot be excluded among the Visegrad countries either.

The expectation for the post-accession period was that the need to comply with the Maastricht criteria would push the central European countries to decrease the economic disparities between their countries and the earlier EU member states. The indirect harmonisations of economic policies were supposed to be a tool to support convergences between their economies. In the longer run it is certainly true that outside pressures have indirectly helped certain convergence of economic policies between the Visegrad countries independently from economic policy coordination. This coordination has been almost non-existent during the past two decades and only serious economic security threats could alter the situation. This is exactly the case currently; however, the developments in the region hint that the tools chosen by the regions’ countries are different and the dividing line is again between Hungary and the others.

The government in Hungary has a visible aim at the moment to stabilise its public finances with revenue increases which are based on additional sectoral taxes and the channelling of private savings in the pension system into the state budget while at the same time cutting income taxes for both households and the corporate sector. Due to these steps the Hungarian budgetary position in the short run will be in order but the longer-term consequences cannot be foreseen at the moment. The sustainability of Hungary’s public finances as well as its transfer system (pensions, social transfers, etc.) will be questionable after 2012-2013.

Revenue side stabilisations have been rarely successful in the past 15-20 years in Europe. The mainstream stabilisation efforts in Europe, which have been followed in the Visegrad countries as well, are much more based on the spending side. This difference explains why the future budget position and debt risk in Hungary and in the other three Visegrad countries is judged differently at the moment by the international actors. This is clearly reflected in the recent downgrading of Hungary’s sovereign debt by Moody’s, which put that country into the Baa3 category, while Czech and Slovak ratings are A1 and the Polish rating is A2.

The changing international strategies of global firms can be interesting for all the Visegrad countries. Many firms are forced to search for further cost-cutting in order to regain their competitiveness in the face of an economic environment where demand in several sectors is expected to stabilise at a level lower than before the crisis. In these circumstances firms are eagerly looking for cost-cutting measures and this may result in large firms rethinking their global presence, leading to the closure of high-cost production facilities and their partial relocation to lower-cost countries. As big multinationals are deterred in some cases from closing facilities in their home countries (for example because of government warnings in some major western European countries) they may choose to downsize their production in other high-wage countries.

Visegrad countries are low-cost locations and the capacities in certain sectors (for example the auto industry) are technologically modern and very competitive so they can expect some additional investment as part of the global cost optimisation strategies of multinationals. It is by no means an accident that Hungary witnessed several additional investments from big car makers in recent months even though future prospects for domestic economic growth and fiscal stability are still not very bright. And this phenomenon is very promising as it shows that central European countries are attractive as locations in international cooperation, which can be an additional element in maintaining export-oriented growth in Hungary, Slovakia and partly in the Czech Republic. Poland stands out a bit from the other three countries of the region as the size of its domestic market makes it possible to rely more on domestic demand rather than external demand – which is the major growth component in the other three countries.