THE VISEGRAD Group countries are closely integrated into the wider European economy and all of them have been adversely affected by the global crisis. Their economic growth slowed and – except for Poland – swung into negative numbers. Expectations for 2011 are brighter, though analysts say national governments’ willingness to reform will be crucial. 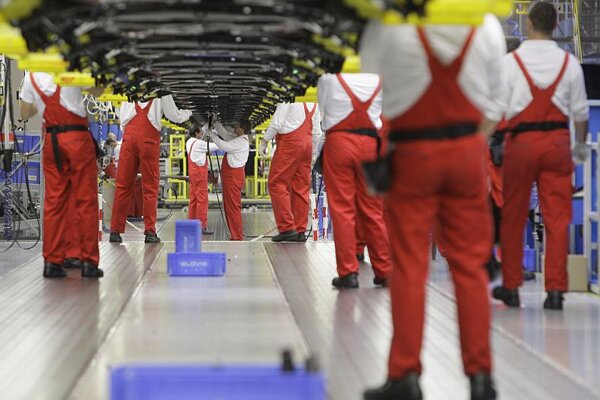 THE VISEGRAD Group countries are closely integrated into the wider European economy and all of them have been adversely affected by the global crisis. Their economic growth slowed and – except for Poland – swung into negative numbers. Expectations for 2011 are brighter, though analysts say national governments’ willingness to reform will be crucial.

“Their accession to the EU was followed by several years of impressive growth,” Jan Fidrmuc from the Department of Economics and Finance at Britain’s Brunel University, in Uxbridge, told The Slovak Spectator. “The crisis undid some of those gains and, with the exception of Poland, plunged the V4 countries into a recession in 2009.”

Poland registered the highest GDP growth of any country in Europe in 2009, growing by 1.7 percent. In fact, it was the only EU country to record positive growth.

“But compared to the previous years, e.g. 6.2 percent in 2006 and 6.8 percent in 2007, it cannot be said that Poland was ‘the green island on the red sea’ because the decline was about 5 percentage points, similar to Spain, Portugal, France and Hungary,” Łukasz Pokrywka, coordinator of the economy and finance programme at the Krakow-based think tank the Kosciuszko Institute, told The Slovak Spectator. “Poland did not avoid the recession – economic growth is below its potential level, estimated at 4.0 to 4.5 percent.”

The labour market in Poland was hit hard, with the unemployment rate increasing, but still Pokrywka sees it as being in better condition than the other V4 countries, with the exception of the Czech Republic.

“The depreciation of the Polish currency created external demand for our goods and services, which became cheaper,” said Pokrywka. “That fact increased exports and finally GDP. But on the other hand it also increased the temporary level of external debt.”

He added that because Poland has an underdeveloped banking sector Polish banks did not invest in financial innovations and avoided taking ‘toxic assets’ into their portfolios. Poland has a diversified GDP structure in which foreign trade accounts for about 40 percent compared to 80-90 percent in Slovakia and the Czech Republic.

Among other reasons listed by Pokrywka were the high level of potential production, EU funds and consolidated financial supervision, which encouraged a conservative lending policy.

Of the V4 countries, the Hungarian economy contracted the most in 2009, by 6.7 percent, according to Eurostat. Slovakia followed with -4.8 percent and the Czech Republic with -4.1 percent.

“Just like the whole region, Hungary also faced a serious (around 20-25 percent) fall in export demand just after the fall of Lehman, as Hungarian manufacturing – like that of Slovakia and the Czech Republic – also specialised in high value-added investment and durable consumer goods, for which demand is highly pro-cyclical,” Gergely Tardos, head of research at OTP Bank, told The Slovak Spectator. “But in Hungary the fall in domestic demand was sharper due to the fiscal adjustment and the higher share of foreign exchange loans than in other V4 countries.”

Consumption in Hungary fell by more than 7 percent in 2009 against the -1 to +2 percent range in other V4 countries and a further fall of 3 percent in 2010 is likely, while in the other three countries growth is expected.

“Therefore the recession was also deeper in Hungary than in our regional peers and the recovery is also slower,” said Tardos, adding that Hungarian citizens faced a more serious recession than the other V4 countries, and had to cut back their consumption much more sharply.

Slovakia, as an extremely open economy dependent on external demand, could not escape the consequences of a sharp decline in export orders at the turn of 2008 and 2009, according to Vladimír Vaňo, chief analyst for Volksbank Slovensko.

“It was the sharp decline in exports, by 16.5 percent year-on-year in 2009, that pulled Slovakia into recession last year,” Vaňo told The Slovak Spectator. “The international comparison of real GDP performance during the recession is inevitably skewed by the extent to which a particular country is dependent on external demand.”

Moreover, especially when compared side by side with its regional peers, the past year was also influenced by a relatively higher base for comparison, i.e. the stronger performance of Slovakia in 2008. In international comparisons, the real annual decline of -4.8 in 2009 compared less favourably than with the Czech Republic (-4.1 percent), and especially Poland (+1.7%). However, in the case of the Czech Republic, Vaňo said it is important to keep in mind the lower comparison base from 2008, when the Slovak economy grew by 5.8 percent, compared with just 2.5 percent in the case of the Czech Republic.

“The benefits of the lucky timing of euro adoption are already being felt in the stronger recovery of the Slovak economy in 2010,” Vaňo said, adding that while Slovakia is expected to grow at close to 4 percent, the neighbouring economies are expected to recover by between 1 and 3.5 percent.

The economy of the Czech Republic is closely interconnected with the German economy. David Marek, an analyst for Patria Finance, told the Czech public-service broadcaster ČRo Rádio Česko that the Czech economy fell into recession due to a drop in exports and also returned to economic growth thanks to exports.

When coping with the impact of the crisis, the V4 countries have relied on two mechanisms to help them absorb some of its adverse effects, according to Fidrmuc: exchange-rate fluctuations and migration flows.

“The effectiveness with which they could utilise these channels of adjustment, however, differs dramatically,” he said. “The Czech Republic, Hungary and Poland all saw their currencies depreciate against the euro towards the end of 2008 and in early 2009. This made their exports to their main export markets more competitive, thus cushioning some of the blow of the recession. Slovakia, in contrast, saw its currency appreciate in the second half of 2008 in the run-up to its entry to the eurozone as of 2009. The eurozone entry, along with the excessively strong conversion rate chosen by the previous government, will contribute to the falling competitiveness of the Slovak economy in the future.”

The second channel for adjustments in response to economic fluctuations, labour migration, is also not equally utilised by all V4 economies, according to Fidrmuc. Poland and Slovakia have relatively mobile workers and as a result have accumulated sizeable ‘floating’ migrant populations in western European countries. As the relative economic fortunes of the home and destination countries change, these migrant populations move back and forth, thus helping mitigate the labour-market fluctuations in both countries. Similarly, the remittances of such migrants are an important stabilisation factor, propping up household incomes in their home countries. The Czech Republic and Hungary, on the other hand, have largely immobile workers and therefore this type of adjustment plays a lesser role for them, according to Fidrmuc.

Fidrmuc says one possible benefit of the current crisis is the fact that such events tend to act as catalysts of change.

“The current eurozone crisis afflicting Greece and Ireland, which threatens to spill over to Portugal, Spain and possibly Belgium, has played the role of a bogeyman, reminding the V4 countries to keep their public finances in order,” he said.

Given the high degree of economic integration of the V4 countries into the wider European economy, the economic fortunes of the rest of Europe will be crucial, thinks Fidrmuc.

“Once the recovery gets underway elsewhere, it will pull up the Visegrad economies as well,” he said. “A potential major threat is the prospect of the eurozone collapsing or shrinking. While the probability of this happening is still extremely low, it is no longer zero. Depending on how this unfolds, it may affect the V4 economies, either because it will aggravate and prolong the crisis or because investors will respond to the euro’s troubles (or indeed precipitate them) by fleeing the emerging and peripheral countries in Europe.”

According to analysts, the courage of national governments in carrying out reforms could be crucial for their countries’ future economic development.

“In my opinion, the future of the Polish economy is dependent on the international situation and public finance reform,” said Pokrywka. “Talking about emerging markets (e.g. the V4), the climate on international markets and risk aversion are principal factors. For example, a large group of Polish workers live in Ireland. If problems emerge in Ireland they may come back to Poland, which could cause higher unemployment. Public finance reform should be done absolutely immediately. But it seems impossible due to the parliamentary elections due in 2011.”

According to Vaňo, in 2010 and 2011 Slovakia stands in a strong position to become the regional front-runner in terms of economic recovery.

“The most intriguing question for the upcoming two years is whether the new Slovak government will be able to fulfil its fiscal consolidation commitment,” Vaňo said. “If the fiscal consolidation does not materialise as it is planned for the upcoming years, Slovakia’s credit rating, sovereign spreads and inevitably also the interest rates charged for private loans might be at stake. I am a little bit afraid that the importance of sound public finances remains underestimated in Slovakia.”

The Czech Finance Ministry predicts that country’s economic growth will be 2.2 percent in 2010, and forecasts a slight slowdown to 2 percent in 2011, the SITA newswire reported.

Hungary expects that the economic growth will speed up, reaching 3-4 percent in the coming years. Domestic demand is also forecast to revive in 2011.

“The most important factor influencing Hungary’s economic performance will certainly be the external environment and global economic growth,” said Tardos. “Hungary is a small, open economy, heavily dependent on exports and German economic growth. The second factor that will heavily influence growth is whether the structural reforms are carried out in a successful way. In the case of successful implementation of healthcare, public administration and labour market reforms, yes, Hungary is likely to keep up with the other CEE countries in the coming years. If these reforms are not implemented, competitiveness will remain below our regional competitors, and therefore growth potential will remain lower.”