OVER the past two decades since the fall of communism in the region, media outlets in central Europe have needed to grow more independent from their countries’ government, to learn how to incorporate new technologies into their business models and to find financial success in turbulent market economies. 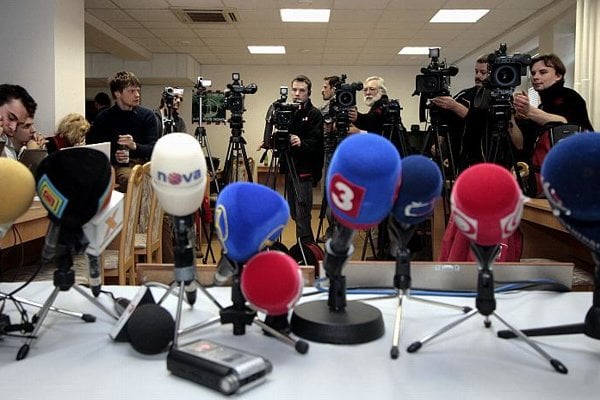 OVER the past two decades since the fall of communism in the region, media outlets in central Europe have needed to grow more independent from their countries’ government, to learn how to incorporate new technologies into their business models and to find financial success in turbulent market economies.

Political interference has been a challenge to the development of media independence since 1989 and not only in Slovakia, where it culminated in 1994-1998. Slovak observers note that because of that heavy-handed interference fifteen years ago the Slovak media system is now more autonomous and better able to resist political pressure than it was before.

“While 15 years ago the prevailing majority of journalists were fighting against the government, today journalists are rather in the position of journalists and not fighters,” Matúš Kostolný, the editor-in-chief of the Bratislava-based Sme daily told the Slovak Spectator earlier this year.

To get a taste of what the changes over the past two decades have been like in the other countries of the Visegrad region, the Slovak Spectator spoke to Anna Spysz, the editor-in-chief of the Krakow Post, Wojciech Przybylski, the editor of the Warsaw-based Res Publica Nova magazine, Bibiána Duhárová, the general manager of the Prague Post, and Allan Boyko, the managing editor of the Budapest Times.

TSS: How has the media environment in your country developed since the fall of communism two decades ago?

Anna Spysz (AS): The media environment has changed dramatically, beginning with publications such as Gazeta Wyborcza that arose as protest publications under communism. Journalistic work and the understanding of the role of the media have adjusted to Western definitions and a free press operates in Poland.

Wojciech Przybylski (WP): 20 years ago there was an outburst of new, independent press both on a local and national level. Gazeta Wyborcza has been an example of one of the most successful media ventures in the press sector. Radio and TV were in a much tougher environment since broadcasting has been allowed only under concessions. Thus, only a few independent radio and TV channels have been started. Also, civic media platforms – such as radio stations that give their broadcasting time to citizens calling and speaking whatever they want – were rare to occur and hardly survived. Maybe the only one of the kind to remain is Radio Maryja, but it has become a far-right Catholic station. While independent media have grown in number there has been another tendency of a falling number of local, independent media as many have been bought by German media tycoons. Local governments are also allowed to publish their own newspapers on local affairs and that just kills independent papers. Another new trend is observable now: websites of journalists who want to comment on politics independently of their publisher.

Bibiána Duhárová (BD): There is a proliferation of privately-owned media sources though many are struggling to generate revenue in recent years. Many of the larger privately-owned media are foreign-owned. With a few exceptions the tone of journalism and many print publications, especially ones with large circulations, offer a sensationalist take on news and events of a quality similar to tabloids in Western Europe and North America. A new generation of editors has taken over some of the country's more prestigious publications in recent years and seem to offer a slightly more refined perspective on the role of media in society.

Allan Boyko (AB): Investigative journalism will likely land you in court or pressure will be brought to bear on you from the revenue side [of the business]. You can still be critical in your reporting but only with information that is in the public domain. Few newspapers have the resources for this anyway. The new media law before parliament will allow [the government] to stack the deck in their favour by appointing members to the overseeing Media Council. Under the previous government the socialists had a majority so there is no surprise that the new government wants to clean house. My opinion is that the media is most-often lazy, but perhaps it has something to do with trying to get information out quick. Often the background will fall out of a story. Furthermore, there is a lot of ‘press release reporting’ especially in the case of business. A lot of PR gets published that has no business being published.


TSS: What are the main challenges in your country’s media environment at this time?

AS: One of the largest problems facing media in Poland is lack of financing, just as in the rest of the world as we move from print media to other formats. One challenge is for old media to embrace the internet in a constructive way.

WP: Local media face making changes in the law to forbid local governments from publishing their own press. The main TV and radio channels are state-controlled and so is the second most-read daily Rzeczpospolita. This raises obvious questions, but there is no danger as long as there are privately-owned media.

BD: Declining revenues and circulation for traditional journalism outlets are the biggest problem with several large print publications potentially going out of business in the next year. In television, with the exception of state-owned channels, there are few sources of quality news or reporting. The largest challenge for the media dedicated to news and public service is to continue operations at as high a level as possible until post-crisis economic recovery solidifies.

AB: Many have their hands in the air over the media law, saying that it will promote state censorship. Censorship already exists. For example, by law an interviewee can ask to read their quotes before publication. When the quotes are read it is usually by some PR person, justifying their job, and taking anything potentially controversial or colourful out. The main challenge is revenue. If you are struggling to survive you can forget about all the nice ideas of investigative journalism and being a critical watchdog.

TSS: How would you describe the relations between media and the ruling government in your country? Are relations problematic or smooth?

AS: For the most part, relations between media and politicians are smooth even though there are parties that accuse the media of bias on a regular basis. There is a wide range of media covering the entire political spectrum, however, so there does not appear to be an overarching bias in the media.

WP: The relations are rather tough but fortunately the government does not intend to change the law because of this.

BD: There is almost zero official interference by the government in what the media publishes; with that said, the relationship alternates between antagonistic and excessively intertwined. The media often allows itself to be used as a pawn between competing politicians and parties who leak information in an attempt to achieve political gain.

AB: The socialists who lost power after eight years were more media-friendly and more professional than the new Fidesz government. Most of the media have a left-wing bias so it is no surprise that relations are not easy. The previous government also tended to govern through the media: lots of fights between cabinet members in the press, issues negotiated by headlines. Fidesz has a two thirds majority. It does what it wants rather than worrying about what the reaction in the press will be. It makes many who are used to a more conciliatory approach uncomfortable here and abroad. I am not sure if it is a bad way to handle things. Hungary does not have time for issues to be talked to death or measures to be watered down by committees.

TSS: How has the media market in your country adjusted to new media forms and new methods of communication? What impacts have internet journalism, blogs and multimedia had on your country’s traditional media?

AS: Most media have been quick to adopt new media and social networking to their advantages; however, so far they have been slow to adopt mobile applications as a means of publishing.

WP: Not much yet; big players like Newsweek and TheDailyBeast are still ahead of us. That is at least until internet access is provided to the majority of the population.

BD: Like almost anywhere in the world, more and more people use the internet to obtain information and media outlets, with the exception of state-owned entities, are struggling to monetize internet-based information to finance their operations. Most traditional media outlets offer blogs and multimedia on their web sites and several news servers operate exclusively online. The Prague Post has added several new digital-oriented products over the past 12-18 months including PDF subscriptions, Kindle subscriptions, blogs that are updated seven days per week and daily news briefings five days per week. Next year we plan to add an iPhone application.

AB: The online media are most critical and are more likely to break stories that are off the radar for reasons of conviction or provocation. The new media law takes aim at them directly through increased regulation – trying to curb freedoms they have that traditional media do not enjoy.