A statue of Svätopluk, a ninth-century regional leader, was erected in the main courtyard of Bratislava Castle late in the term of the Robert Fico-led government and proudly unveiled just before the general election. It was criticised by historians and artists for its historical inaccuracy and for mythologising history. It remains in place, but is one of several nationalist-inspired relics from the previous government which the Radičová government has not been able to sweep away entirely. 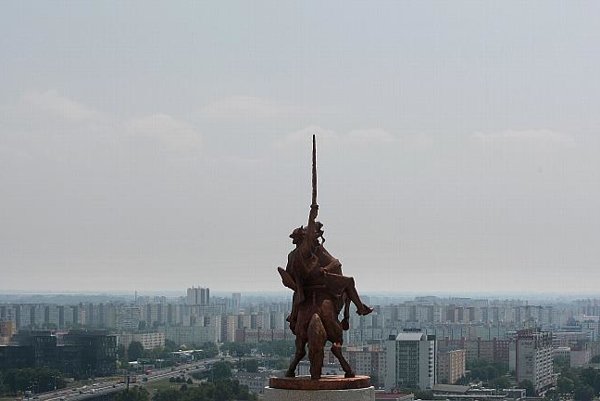 A statue of Svätopluk, a ninth-century regional leader, was erected in the main courtyard of Bratislava Castle late in the term of the Robert Fico-led government and proudly unveiled just before the general election. It was criticised by historians and artists for its historical inaccuracy and for mythologising history. It remains in place, but is one of several nationalist-inspired relics from the previous government which the Radičová government has not been able to sweep away entirely.

The law on state symbols had a similar genesis. The programme statement of the government says nothing about amending this law, which the Fico government changed, ostensibly to promote patriotism. That step attracted massive criticism from students, minority representatives, human rights activists and the general public.

It requires the national anthem to be played by public broadcasters Slovak Television and Slovak Radio every evening at around midnight, as well as by schools at the start and at the end of the school year, plus before the first and last sessions of the state parliament, government meetings, and local and regional parliaments. State symbols – the preamble to the constitution, the national flag and Slovakia’s coat of arms – are to be displayed in an appropriate place in schools. The law took effect on September 1 and has not yet been amended, despite an attempt by some coalition MPs to propose changes to it.

The State Language Act, which introduced fines for using languages other than Slovak in official communication, was another law expected to be scrapped by the new government almost immediately after it came into office. Nothing happened, however, and it took nearly half a year for the new government to draft an amendment, which has since won parliament’s approval. Culture Minister Daniel Krajcer, whose department authored the amendment, said that “all the nonsense” has been removed from the law. However, fines for language misuse, although limited to public offices only, remain in the law.

Coalition party Most-Híd criticised the amendment as imperfect, but admitted that in a coalition of four parties a compromise is the most frequent solution, and therefore supported the law in parliament. Originally, Most-Híd wanted to have the law scrapped or at least completely stripped of fines.

Slovakia’s Press Code, last amended in 2008 under the Fico government, is another much-criticised measure which has endured. The current government included a revamp of the controversial law in its official programme and Culture Minister Daniel Krajcer and his team have already submitted a draft revision to the code which, among other things, will trim the scope of public officials to use the right to reply currently defined by the law. If it is passed, as expected, public officials will no longer be able to insist on a printed reply to stories about them providing these pertain to the performance of their public function. However, public officials will still enjoy a right to reply as private individuals; Krajcer says that this is in line with the Slovak constitution. Newspaper publishers say that Krajcer’s revision brings improvements, but does not incorporate all the recommendations that they have demanded.

Limiting MPs’ privileges was one of the main aims Iveta Radičová set out when she authored the constitutional law that is required to curb the immunity of MPs from criminal prosecution. Radičová had originally hoped that the change would initiate what she called “a new kind of relations” between citizens and MPs, but passing a constitutional law requires a qualified majority of 90 seats and so the ruling coalition, having only 79, had to rely on opposition deputies for support. They, however, chose to let the draft law sink in a final vote on October 26, after lengthy debate in parliament. The opposition argued that its refusal to restrict MPs’ immunity to statements made in parliament stemmed only from the fear that the ruling coalition might criminalise deputies from Smer or the Slovak National Party (SNS) who were in government for the preceding four years.

Radičová said that her government would continue working towards ending the immunity of MPs from non-criminal misdemeanours, which means that deputies could end up being fined for offences such as traffic violations, just like anyone else.

The ministry published instructions for Covid home treatment after one year

There is one more website to find information, but only in Slovak.