IT SOMETIMES looks as though Bratislava Castle, now in its new white dress, is sleeping and just waiting to be awakened for a new life after its thorough reconstruction is finished. But this is not completely true as the traditional Christmas at the Castle event returned to Bratislava Castle on December 12 after an absence of two years. During the event children who successfully completed tasks in courage, wisdom and other virtuous traits were dubbed royal knights. In addition, the children were able to prepare their own coat of arms, shields or parts of historical garments or armour at several creative workshops. 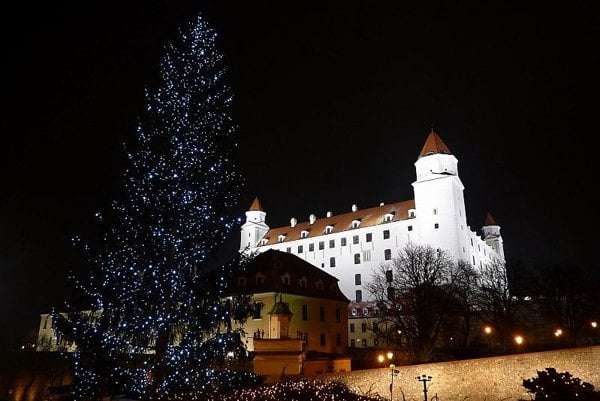 IT SOMETIMES looks as though Bratislava Castle, now in its new white dress, is sleeping and just waiting to be awakened for a new life after its thorough reconstruction is finished. But this is not completely true as the traditional Christmas at the Castle event returned to Bratislava Castle on December 12 after an absence of two years. During the event children who successfully completed tasks in courage, wisdom and other virtuous traits were dubbed royal knights. In addition, the children were able to prepare their own coat of arms, shields or parts of historical garments or armour at several creative workshops.

To complete one of their tasks, the children had to visit the exhibition Ars Liturgica – Goldsmithery in the Service of Liturgy which is on display at the castle’s Treasury until the end of next April. This exhibition – organised on the occasion of the Year of Christian Culture – presents sacral objects made from precious metals used in the liturgies of the Catholic, Protestant and Orthodox churches in Slovakia.

The luckiest participants on December 12 also had a chance to glimpse into the just restored interior halls of the castle. Three 30-member groups were permitted inside to see the castle’s staircase which is probably, according to the castle guide, the largest Baroque staircase in central Europe. The impressive white staircase now boasts abundant, newly installed, gilded stucco decorations.

Visitors also had the opportunity to view an almost completely renovated hall which had been used for representation purposes during the reign of Maria Theresa. Though it no longer has its original floor plan, as in the past it consisted of two rooms, the walls of the hall are now redecorated with gilded stucco while the floor was reconstructed from parquet panels. The ornaments on the walls and the ceiling are not originals but were inspired by decorative elements in Vienna’s Hofburg Palace because the castle’s 1811 fire did not leave any physical hints or drawings about the original decorations.

But since the residences of the Habsburgs in Vienna and Bratislava were designed by the same architects, it is believed that the decorative elements were the same or similar to those in Vienna.

Visitors to Christmas at the Castle also learned that the width of the castle’s walls vary from seven metres to about two metres. The thickest walls are on the side facing the Slovak parliament building and they were constructed in this way so they could survive an artillery attack.

The current appearance of the castle dates back to the 15th century when King Sigismund of Luxembourg demolished all the existing buildings on Castle Hill, except for the south-western defence tower known as the Crown Tower, and began construction of a new Gothic palace. The Crown Tower still stands and it the largest of the castle’s four towers. Later the castle underwent reconstructions in Renaissance and Baroque styles.

The last major reconstruction took place under the reign of Maria Theresa who had the desire to make Bratislava Castle – as a residence of the Habsburg Monarchy – equal to the leading houses of other European nobility. After Maria Theresa’s death, Bratislava Castle markedly declined physically as well as in prestige. Her son, Joseph II established a school and seminary for Catholic clergy and in the period of the Napoleonic wars the castle was used as a military barracks. In 1811, because of poor judgment by the military detachment, the castle was totally destroyed by fire and remained as only a deteriorating ruin for more than 140 years.

Extensive reconstruction was undertaken between 1953 and 1968 and the castle was more-or-less returned to its 18th century appearance.

The current, ongoing reconstruction of the castle began in April 2008 with detailed archaeological research which in spring 2009 revealed 22 gold and silver coins that had been minted when a Celtic oppidum existed in the area of today’s Bratislava. The find included an unusually high number (15) of staters – shell-like gold coins – four of which have the word NONNOS on one side. The castle’s reconstruction website describes these four coins as a breakthrough archaeological discovery as this is the name of the second Celtic prince who ruled this territory. Another important find was the discovery of an interior brick mosaic floor in the courtyard dating back to the 1st century BC.

The primary idea of the current reconstruction is to return the castle to the Baroque look of its golden times during the reign of Maria Theresa. The castle’s façade was repainted in its current white colour after modern research techniques, in combination with historical resources, revealed that the castle had such a white façade throughout its entire history, from the Gothic period up to the last reconstruction before the fire of 1811.

The castle is actually owned by the Slovak Parliament which is covering the costs of the current renovations which are estimated at €126 million according to the Sme daily.

When the reconstruction is complete the Slovak Parliament will use some of its premises for representation purposes and the Slovak National Museum will continue to use the castle for various exhibitions.

More information about the castle’s current reconstruction, in English, is available at www.bratislava-hrad.sk.