TV in Slovakia to go fully digital by 2012

SLOVAKIA is switching from analogue broadcasting of TV signals to digital. The process is expected to be completed over the course of 2011 with the analogue format to be discontinued completely by the end of 2012. Moving to the new technology brings better picture and sound quality and it also offers multiple programming choices and interactive capabilities. 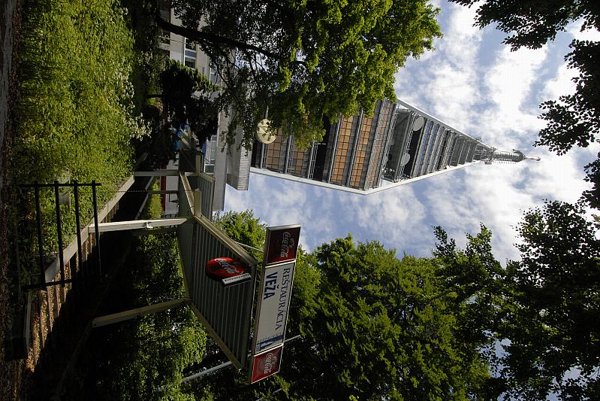 SLOVAKIA is switching from analogue broadcasting of TV signals to digital. The process is expected to be completed over the course of 2011 with the analogue format to be discontinued completely by the end of 2012. Moving to the new technology brings better picture and sound quality and it also offers multiple programming choices and interactive capabilities.

“The process of the transition to digital TV is following the plan and if no unpredictable events occur we believe that we should complete the definitive transition from analogue to digital broadcasts in late 2011,” said Ján Hudacký, the state secretary of the Ministry of Transport, Construction and Regional Development, on December 7, as quoted by the SITA newswire. In several areas of Slovakia digital television has already been launched along with restriction of the analogue signal. He added that a mass switch-off of the analogue transmitters is expected during the first half of 2011.

The transition to DVB-T (Digital Video Broadcasting-Terrestrial), as the whole process is known in Slovakia, directly impacts those viewers who receive their TV signal via a classical TV antenna on an analogue TV set. These viewers will need to obtain a so-called set-top box, a digital-to-analogue converter, or purchase a new TV and redirect their antenna in order to receive digital programming. The ministry estimates the proportion of such Slovak households at 50 percent, according to the website www.digimedia.sk, which is devoted to the transition. The change will not affect those using the services of cable operators or receiving their signal from a satellite.

Filip Hanker, an expert and the editor-in-chief of Zive.sk and MobilMania.sk, sees the transition to the digital format as an opportunity to launch interactive services, even though at the current time there is no information about their actual launch.

Hanker perceives the main disadvantage of the transition is that people who still own analogue TV sets will need to buy either a set-top box or a new TV and re-direct their antennas.

To support the ‘digitalisation’ of Slovak society the government is prepared to help socially-weak groups of citizens to purchase set-top boxes with a one-off subsidy of €20 per household. However, at the end of 2010 parliament changed the method for distribution of the financial assistance. Originally, people with low incomes, pensioners and the disabled were supposed to automatically receive the €20 for purchase of the set-top box by post. Now, they must apply to receive the subsidy.

An important benefit of the switch to all-digital broadcasting is that it has freed up parts of the broadcast spectrum. Hanker believes that the additional bands can later be used for internet connectivity.

Under the new system and within the so-called multiplex system, a group of TV channels are mixed together (multiplexed) for broadcast over a digital TV channel and then separated out (de-multiplexed) by the receiver. Since one TV channel or frequency enables the broadcast of only one analogue television channel, the digital format enables much more to be broadcast, depending on the chosen MPEG standard (the generic coding of moving pictures and associated audio information).

Hanker believes that from the technological point of view it would be better for Slovakia to choose the more modern standard and he expects in the future that the country will switch to MPEG-4. He discounts arguments about the large difference between the prices of devices with the older and newer coding standards, saying that this is gradually disappearing. Currently the price differential is between €15 and €20, according to Hanker.

Slovakia’s transition to the digital format has been taking place gradually since 2007. The first step was to make digital television available at previously unused broadcast frequencies within the so-called transition multiplex.

Towercom, which provides television broadcasting throughout Slovakia, launched the commercial operation of the first, transition multiplex on December 22, 2009. Later, an additional two multiplexes were launched.

According to Šuran, the switch-off of large analogue transmitters, will free up frequencies for the extension of DVB-T that is planned for the second quarter of 2011. So far, two small transmitters have been switched off and so far nine Slovak villages have solely digital broadcasting and no analogue TV signal.

The composition of TV channels that will be available via individual multiplexes is not final and is still undergoing change. Currently, the first multiplex contains the first and second channels of the public-service broadcaster (RTVS) along with private TV stations Markíza and JOJ. The second multiplex offers Markíza and its TV Doma channel as well as JOJ and its JOJ Plus channel. The third, public multiplex offers all three RTVS channels. Of all the Slovak TV stations with nationwide coverage only the TA3 news channel is missing from the three multiplexes.

“The composition of multiplexes depends on an agreement with broadcasters,” said Šuran. "The digital multiplexes already contain TV stations of almost all the nationwide Slovak broadcasters. If another broadcaster is interested in broadcasting in a nationwide multiplex, we are ready to offer it our services.”

Towercom expects another enrichment of digital terrestrial broadcasts with the transition of regional TV stations to DVB-T, for which local digital multiplexes are being allocated. Radio stations may also be components of the multiplexes and it is expected that the public multiplex will offer public-service radio in addition to the TV channels. Towercom expects that privately-owned radio stations will be interested in being broadcast via the commercial multiplexes.

Towercom expects that the overall TV signal coverage within Slovakia will not actually change and be at approximately the same level as before the transition to the digital format.

Hanker said the change in format may bring a problem in areas in which their analogue broadcast signal was weaker, with a lower quality picture, explaining that since digital television brings “either 100 percent or nothing” this may mean than in poor reception areas digital broadcasting could improve quality or result in nothing at all being available.

The information campaign about the switch-off of analogue television has so far not been very intensive and some affected villages have already complained that they received information too late. According to Zive.sk, Towercom has chosen the process of informing affected communities and their citizens only some days before switching-off of analogue broadcasts. The website stated that Towercom believes earlier information would be no more effective as people do not pay attention to the impending transition until they are directly affected.

Together with the state, Towercom has prepared an information campaign which, according to Zive.sk, includes the visit of a minibus to affected villages. It provides detailed information and advises people on how to re-direct antennas as well as selling set-top boxes and new antennas. Mayors of municipalities also receive information letters and a package of posters for their communities.

Hanker regards the campaign to inform people about the transition to digital television as being weak and late, saying this may lead to hasty decisions by people to buy new devices without properly thinking over what kind of functions they want in their new TV sets. He added that an expert is also sometimes required for the proper setting of the antenna and that some citizens may “swallow the bait” of companies offering different ways of receiving the TV signal.

“Such a campaign should have started in affected localities at least two months before,” Hanker told The Slovak Spectator. “[In that way] it might have pulsed, that is weakened two or three times and then strengthened again.”