THE FIRST day of the New Year in the Zemplín region in the easternmost part of Slovakia had many folklore traditions. People, of course, wished each other everything good in the coming year, but they also observed many customs which they believed would bring a prosperous farm as well as family health and cohesion. 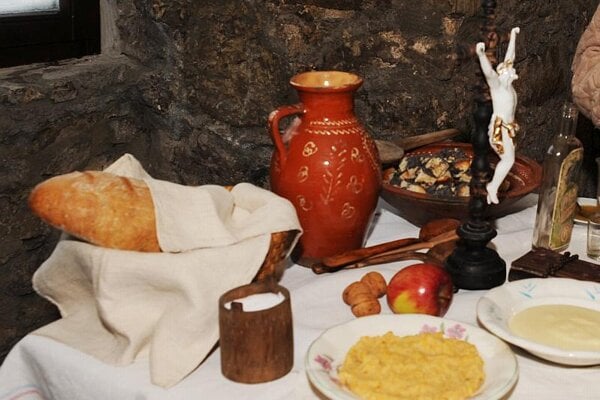 “The first day of the New Year had a special power, various bans on specific activities were connected with it, otherwise the household or the farm would not fare well,” Štefan Kocák of the Hornozemplínske osvetové stredisko (Upper Zemplín Education Centre) in Vranov nad Topľou told the TASR newswire.

“On this day, too, like during Christmas, carol singers, or well-wishers, went round the houses in the village. Their wishes were mostly oriented towards the farm’s prosperity but they also included wishes of good luck, good health, and peace and love in the family,” Kocák explained.

He added that on New Year’s Day, villagers ate pork, symbolising wealth and prosperity. Part of the menu was also a cake called “kračun”. Members of the household ate some of the cake already on Christmas Day but that evening the head of the house was supposed to put it on the house-supporting timber – called the mešterná hreda – and it was to be taken down only on New Year’s Day.

Kocák explained that Zemplín residents also avoided eating poultry or fish at the beginning of the year, fearing that their luck would “fly away or flow away” and that the man of the household was supposed to get up first and bring fresh water from the stream for the whole family to wash themselves before putting on clean clothes and leaving for the New Year’s mass at the village church.

Municipal representatives were usually elected in the first days of the year. “The municipal council used to hire and choose the communal attendant; administrative companies elected the bell-founder, sacristan and gravedigger,” he said.

Kocák described another curious local tradition from when young men started organising balls at the start of the 20th century, first on January 6, the Epiphany, and later on New Year’s Day. To make sure they would have musicians for their dance, the young men took the violin from the first violinist in the local folk band to make sure that the musicians would really keep their promise and play at the ball.