Parties not charged, but doubts linger

WIDELY publicised claims about dubious financing of Slovakia’s two biggest political parties seem destined to remain the subject of conjecture after official decisions not to pursue court action. After a prosecutor discontinued a criminal inquiry into the financing of the opposition Smer party in early December, at the beginning of the year Special Prosecutor Ján Šanta halted a separate high-profile investigation into a case involving the financing of the ruling Slovak Democratic and Christian Union (SDKÚ). Transparency and political ethics watchdogs expressed doubts about whether the prosecutors’ moves will dispel suspicions arising from the cases. 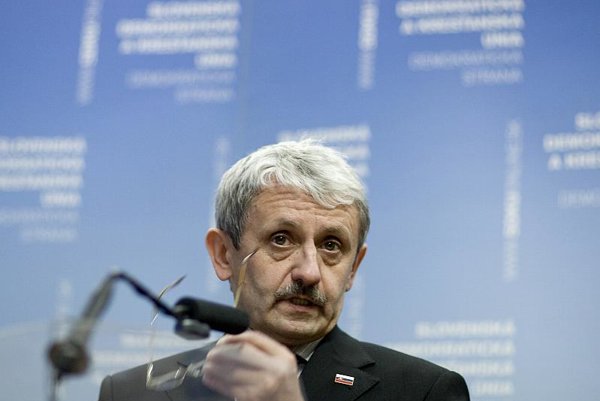 WIDELY publicised claims about dubious financing of Slovakia’s two biggest political parties seem destined to remain the subject of conjecture after official decisions not to pursue court action. After a prosecutor discontinued a criminal inquiry into the financing of the opposition Smer party in early December, at the beginning of the year Special Prosecutor Ján Šanta halted a separate high-profile investigation into a case involving the financing of the ruling Slovak Democratic and Christian Union (SDKÚ). Transparency and political ethics watchdogs expressed doubts about whether the prosecutors’ moves will dispel suspicions arising from the cases.

While Smer boss Robert Fico called the allegations of murky financing of his own party a media bubble and a non-existent case, in response to the prosecutor’s decision on SDKÚ financing Smer said it respects the decision but “reserves its own opinion” on the matter. SDKÚ has consistently said that it never laundered money and that Fico should first of all clean up his own party.

Nevertheless, the party-financing allegations have strengthened calls for stricter control of how political parties in Slovakia are financed.

Prime Minister Iveta Radičová, a member of SDKÚ, has promised that relevant legislation will be ready for discussion by parliament as early as this year. The watchdogs say that supervision of party financing should be transferred to an independent body, while the law regulating political parties should be made stricter.

Special Prosecutor Šanta halted the criminal inquiry into the SDKÚ case on the grounds that, according to him, the party led by Mikuláš Dzurinda had backed up its claims that it received and repaid a loan in a normal manner while submitting relevant accounting documents and annual reports. Šanta also said that the accounting transfers had been checked by auditors.

“This is suggested by a printed file of approximately 1,500 pages, consisting mainly of written evidence and testimonies of all the people involved,” Šanta said in a statement provided to the SITA newswire.

Šanta said that it had not been substantiated that SDKÚ representatives during a privatisation process had acquired some provisions which could have been the means to legalise some illegal activities in the way Fico has suggested.

Fico dug up the long-dormant SDKÚ financing case at the beginning of 2010 and suggested that the SDKÚ was involved in what the Smer boss called money laundering, fictitious firms and tax-haven bank accounts. Fico asserted that the SDKÚ channelled money through foreign accounts supervised by its officials.

Then, shortly before the 2010 parliamentary election, the Sme daily received and published an audio recording featuring a voice resembling that of Fico. The conversation on the recording implied that Smer might have accepted campaign contributions from sponsors that were not properly recorded in the party’s financial accounts. The investigation into the Smer financing was halted by Special Prosecutor Dušan Kováčik last year.

But Gabriel Šípoš, cirector of Transparency International Slovensko, told The Slovak Spectator that the prosecutors’ conclusions are unconvincing and said his organisation suspects that their investigations were not conducted independently of politicians.

Zuzana Wienk, head of the political ethics watchdog Fair-Play Alliance, told The Slovak Spectator that “in the long term there is no will on the part of the criminal prosecution bodies to honestly prosecute cases pertaining to party financing; no one carries responsibility for the violation of the rules, which is the greatest blow to this society.”

Fico re-opened the SDKÚ financing issue after a four-and-a-half-year lacuna. It involved a so-far unexplained transaction which helped the party clear its then-Sk22 million (approximately €730,000, at current exchange rates) debt and at the same time allowed it to sell its Medená Street property for Sk27 million (approximately €896,000, at current exchange rates). Fico initially suggested that unidentified owners of Swiss bank accounts and shell firms in tax havens were involved in the deal. Then, on January 27, 2010, Fico claimed that the SDKÚ is controlled by shell companies based in London, with CEOs operating in tax havens and holding accounts in Swiss banks. Fico also claimed that only Sk300 million of the Sk425-million purchase price of the Hotel Forum (now the Crowne Plaza hotel) had reached the government’s account.

Yet, according to Šanta, his investigation has not revealed any irregularities during the sale of the Hotel Forum in Bratislava. He said that the purchaser paid the whole sum for the hotel, €14.11 million – a price set based on expert opinion – in instalments, and that the whole payment had been accounted for in a regular manner.

Nevertheless, the ruckus around the financing resulted in Dzurinda stepping down as SDKÚ election leader, allowing Radičová to climb to the top of the party’s candidate list and subsequently become prime minister.

Dzurinda said last year that his party had already paid the price twice for unanswered questions pertaining to his party’s financing between 2000 and 2004: once in 2002, and again in 2006, in those parliamentary elections. Since then, the party’s financing has been completely transparent, he said.

Responding on January 5, 2011 to the prosecutor’s decision, Dzurinda told public-service Radio and Television of Slovakia: “long-term and very detailed investigation has proved what it was possible to prove: simply the truth, which is that our financing is and has been legal.”

Regarding the suspicions involving Smer, the main evidence submitted for investigation was an audio recording published by Sme shortly before the election in June 2010, in which a voice resembling that of Fico talks about having secured funding for the party from undisclosed sponsors, bypassing its official accounts.

Fico now claims that there was never any scandal in the case of his party.

“It is a bubble; a bubble brought by the Sme daily two days before the parliamentary election to damage us,” Fico said, as quoted by the SITA newswire, adding that Smer’s accounting has been through all “possible controls that exist”.

He also said that no suspicious transactions have ever been found in Smer’s financing because “only a naive fool can think that someone takes Sk100 million and thus pours it into the financing of a party. It is simply not possible”.

Fico said that Smer’s financing comes entirely from the state budget, noting that based on the results of the 2010 election in which it emerged as the highest vote-getter, Smer has received funds sufficient to completely cover the needs of the party plus its campaign expenses.

Sme reported that Special Prosecutor Kováčik dropped the criminal inquiry into Smer financing on the grounds that both Robert Fico and Fedor Flašík, whose voice also allegedly appears on the recording, stated that the voices on the tape were not theirs.