Progress in some areas, lack of action in others

WHEN the centre-right coalition of four parties, two of which came to the government as political greenhorns, started ruling Slovakia six months ago, political observers predicted that turbulent debates and multiple compromises would be the most telling characteristics of the new government. The past half-year has proved those analysts right, as many issues that were expected to be handled quickly remain on the political agenda just as they were when Robert Fico left the prime minister’s chair. But the past six months have also provided examples that well-crafted compromises can be an effective governing style. 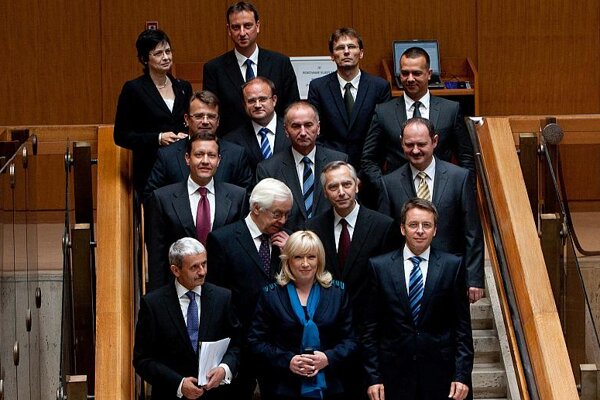 The Radičová-led government at the start of its term. (Source: Sme - Vladimír Šimíček)
Font size:A-|A+0

WHEN the centre-right coalition of four parties, two of which came to the government as political greenhorns, started ruling Slovakia six months ago, political observers predicted that turbulent debates and multiple compromises would be the most telling characteristics of the new government. The past half-year has proved those analysts right, as many issues that were expected to be handled quickly remain on the political agenda just as they were when Robert Fico left the prime minister’s chair. But the past six months have also provided examples that well-crafted compromises can be an effective governing style.

The leitmotif of the current government of Prime Minister Iveta Radičová is its well-publicised focus on policies to root out corruption and to increase government transparency. Both were prominent points in the programme statement issued by the four parties last summer.

The most visible anti-corruption measure passed by parliament requires that all institutions covered under Slovakia’s Freedom of Information Act (ministries, agencies and public organisations, municipal councils, regional governments, and others) must publish on the internet all contracts that they consummate, beginning January 1, 2011. Observers have described this step and the corollary revision to the Civil Code, approved by parliament on December 9, as a courageous and revolutionary piece of legislation which will offer the public more control over the expenditure of government funds and will potentially prevent irregular contracts from being negotiated or signed by state institutions.

“Even the Czechs are discussing whether they should pass such a system of publishing contracts like the one we have introduced,” Radičová said in an interview with the Sme daily evaluating her first six months in power.

The government claims that it is also ready to fight against other forms of corruption across society in 2011. Political analyst Miroslav Kusý said such a trend has been visible at ministries and views it positively.

“There are really many remarkable little things that haven’t shaken society but have blown winds of change into the individual departments [of government],” Kusý told The Slovak Spectator, specifically mentioning the work of the defence minister as an example. Defence Minister Ľubomír Galko has established a special ‘anti-corruption hotline’ at 0960 960 960, which anyone can call and leave a message directly for the minister about possible corruption or failures in personnel management. Only the minister has access to the recorded messages and he has said that callers are guaranteed anonymity.

Radičová assumed the post of prime minister during a turbulent time when the EU financial bailout of Greece was in the works and Slovakia’s participation in the European Financial Stability Facility (EFSF) needed swift government action. The national economy as well, still partially suffering from the impacts of the global financial crisis, was in need of state attention.

Slovakia refused to participate in the loan to Greece, stating that irresponsible behaviour by a sovereign state should not be endorsed, as well as setting forth other objections. By making such a statement, the Slovak government obliged itself to set a stronger path of fiscal austerity. As part of the government’s austerity plan, salaries for the highest public officials have been cut and a salary freeze was introduced for other positions in the state government. Another notable legislative step to bring more revenue to the state was to increase VAT by one percentage point to 20 percent at the beginning of 2011, a rather unpopular action with the public.

Other changes made by the government during its first six months include the restoration of Slovakia’s Environment Ministry, which had been abolished by the government of Robert Fico and a revamp of the office of the deputy prime minister for national minorities and human rights, which was given stronger powers. Most recently, the government and parliament approved the Culture Ministry’s proposal to merge Slovakia's public-service radio and television broadcasters into one company. Radio and Television Slovakia, RTVS, began as a new joint institution on January 1 and a call for applicants for the RTVS director’s position was announced on January 10.

“Finally the polemical tone has disappeared, the atmosphere in which the political leaders of Smer and the SDKÚ had been throwing dirt at each other,” Kusý also stated when asked by The Slovak Spectator about the important achievements of the past six months. “That is positive. Both leaders perhaps came to the conclusion that it was counterproductive and they seem to have started a new line, though not cooperation since Fico is and always will be a hard opponent; but they exchanged the personal tone for a matter-of-fact style.”

Parliament passed more than 100 laws in the past six months though some of them, such as the law on judges and the amended State Language Act, were vetoed by the Slovak President Ivan Gašparovič and are now awaiting another parliamentary vote.

Nevertheless, many issues that the new government was expected to act quickly upon remain in the same status as when the Fico-led government departed after the June 12 parliamentary election.

One such issue is that of immunity from criminal prosecution for MPs and judges which Radičová had presented to parliament as one of her first legislative initiatives. Since stripping MPs of their immunity from criminal prosecution requires a constitutional majority (90 of 150 votes) and the coalition has only 79 MPs it was not successful in pushing the measure through parliament. But the government is still expected to abolish MPs’ immunity for non-criminal offences such as misdemeanours or traffic violations because that change requires only a simple majority.

Other measures included in the coalition’s programme statement that have not yet been acted upon by the government or parliament include cancelling the prohibition on private health insurers making a profit, abolishing the National Property Fund (FNM) – Slovakia’s privatisation agency and its primary holder of state assets – and amending the country’s Press Code, which includes several controversial provisions such as politicians’ right to reply to statements about them in the media, passed by the previous government.

Coalition stumbles over choice of prosecutor

Selecting a new person for the job of Slovakia’s general prosecutor has been a difficult challenge for the ruling coalition. Since the coalition did not initially put forth a joint candidate, none of the original candidates independently nominated by parties of the ruling coalition were successful after several secret ballot votes in parliament in defeating the incumbent general prosecutor, Dobroslav Trnka, who was endorsed by the opposition parties. It was even more of a surprise for coalition leaders when it became clear that up to six MPs from their parties had voted with the opposition in favour of Trnka.

In an atmosphere of mistrust and blame, the top leaders of the coalition parties agreed once again to nominate a joint candidate but to first change the selection procedure for the general prosecutor so that it will be subject to a recorded parliamentary vote. The coalition leaders reported after meeting on January 11 that a new general prosecutor should be nominated, elected and take office in four to five months’ time.

Kusý labelled the failure to select a new general prosecutor as the most notable stumble of the ruling coalition in its first six months and added that it is particularly unfortunate that the issue will continue to stretch over several months.

“The crisis of the [prosecutor’s] election will keep popping up and of course the Fico-led opposition will use it very skilfully all the time; they will keep digging into it to show that the coalition is incapable,” he said.

Kusý said the coalition is now deliberately changing the rules for selection of the general prosecutor because the parties failed so demonstrably at the end of 2010 and he does not particularly view this approach as positive.

“For that reason, they will plough through the whole system of elections, to turn them into direct elections,” Kusý said. “They are turning this single problem into a [general] rule. If they said the system doesn’t suit them because they had failed and they will pragmatically change the election of the prosecutor, that would be alright. But they are trying to pour a sauce of ideology on it, saying that direct election is the best way and so forth.”

Kusý views hesitation, which has resulted in the government’s programme objectives being accomplished more slowly than expected, as a negative, though understandable, characteristic of the governing coalition.

“It [the government] is always somewhat slow, hesitant, half-hearted, and that is how it will be, because the decisions come from compromise, and the compromise always trims the original proposal,” Kusý stated.

He believes that for this reason tensions within the coalition and problems in communication will continue but added that this is what the art of politics is all about.

“A four-party coalition is an enormously complicated undertaking, and as a heterogeneous coalition they are destined for [such problems],” Kusý said while adding that it can be considered a positive political feature in that what the coalition finally agrees upon has been the result of debate, negotiation and compromise.