SLOVAKS, in general, are brand-oriented and their desire for branded products is even stronger than consumers in other countries as many here still remember the decades during which they could not buy many international branded goods. Marketing experts say the economic crisis has had some effect on the receptiveness of Slovaks to brands, strengthening their traditionally strong craving for the quality of certain brand names but also making them more price-sensitive. 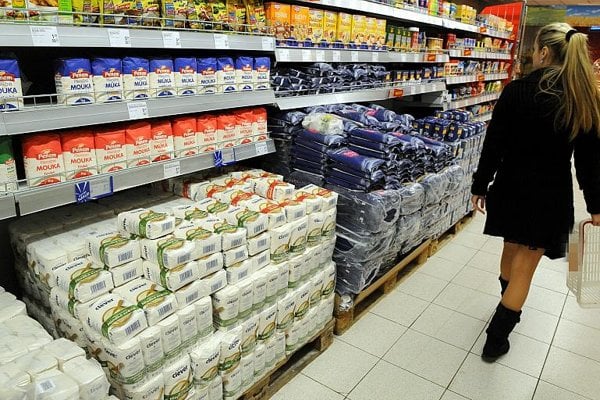 SLOVAKS, in general, are brand-oriented and their desire for branded products is even stronger than consumers in other countries as many here still remember the decades during which they could not buy many international branded goods. Marketing experts say the economic crisis has had some effect on the receptiveness of Slovaks to brands, strengthening their traditionally strong craving for the quality of certain brand names but also making them more price-sensitive.

“The crisis rather made stronger the relation of Slovaks to traditional, established brands,” Marian Timoracký, marketing expert and managing partner of United Consultants, told The Slovak Spectator. “Like everywhere in the world, people here are also looking for a certain guarantee of quality and certainty. And ‘good old' brands provide exactly such a guarantee.”

Dušan Pleško, the executive officer of the Slovak Association for Trademark Products (SZZV), shared that opinion particularly about the sector of non-durable consumer goods.

“It is remarkable that the crisis has almost not changed the perception of branded non-durable consumer goods,” Pleško told The Slovak Spectator.

In assessing Slovaks’ perceptions of branded consumer goods, Pleško said that since there are various goods in each category, Slovaks can compare individual products. And even if some consumers choose an ‘exceptional’ offer of a non-branded product, Pleško said they often discover that the ratio between the utility value and the price of the product is best for the branded product and that the guarantee of quality and the care of the brand manufacturer can be accepted as a matter of course.

Ľubomír Drahovský, a market analyst with the Terno market survey agency, pointed out that the role of the final retail price has been accentuated by the economic crisis.

“The crisis has had a large influence over the perception of brands or the names of retail companies,” Drahovský told The Slovak Spectator. “The crisis has resulted in price becoming the decisive factor. The drop in the purchasing power of Slovak households and individuals has now brought about a situation in which price is the top priority.”

According to Drahovský, this price-sensitivity, especially in the food sector, makes Slovaks less loyal consumers of certain brands.

Nonetheless, Slovak brand names such as Kofola, Vinea, Jar, Zlatý Bažant and Horalka remain popular and Slovaks have been buying these brands for dozens of years even though their producers have changed ownership and in some cases are now foreign-owned. But marketing experts do not see nostalgia alone as being behind the continuing popularity of these Slovak brands.

Instead, a lot of hard work and investment in recent years has paid off.

“Excellent and systemic work by all those who work with these brands has borne fruit,” said Pleško. "They would reach such success among consumers only with difficulty without innovation, enhancing the products, quality control in production and other important attributes of the branded product. These and many more brands are proof of it.”

Drahovský sees consumer trust in the quality of these traditional brands as responsible for their continuing popularity and Timoracký believes that many of these brands remain popular thanks to well-prepared marketing.

“These are brands which through their communication – from the visual aspect of the product, via advertising, and the way in which they make contact with the consumer – sensitively link them with their past,” said Timoracký.

He believes that even further globalisation of the Slovak market will not push aside domestic brands.

“Especially in the food producing industry, local brands will always have a strong influence,” said Timoracký. “International concerns also understand this natural affinity and in their portfolio in a particular country not only keep, but also actively develop, local brands. It is possible to mention Heineken, which in Slovakia supports Zlatý Bažant as well as Corgoň. Similarly SAB [another global brewer] goes even one level lower – which I evaluate very positively – as it is developing one of its brands, Šariš, not as a Slovak beer but as a regional beer.”

“It is possible to say about branded goods that Slovaks, with regard to the country of the origin, distinguish among several categories,” said Timoracký. “In the ‘foreign high-quality’ group Slovaks rank, for example, German cars, French perfumes, and Japanese electrical appliances; the ‘foreign-lower quality’ group includes Korean and Chinese products, but the perception of goods from this group has been becoming better. Then there are ‘our traditional local brands’ which include several Czech-Slovak brands like Kofola, Jar, Prim, Botas and others.”

Timoracký added that there are also other Slovak brands about which Slovaks are rightfully proud. In addition to traditional brands like Figaro chocolates and Zlatý Bažant beer he mentioned some newer companies such as software developer Eset. According to him, Double Cross Vodka and the Penta private equity group may also belong here.

Regarding the question of domestic or foreign ownership, Drahovský pointed out that after the fall of the communist regime many traditional domestic producers were acquired by foreign companies and that many foreign firms also launched their branches in Slovakia. But he does believe that Slovaks pay more and more attention to whether goods are produced in Slovakia or elsewhere.

Drahovský perceives campaigns to support the sale of goods produced in Slovakia in a very positive way.

“Without question I perceive this as an important marketing tool so that people realise that when they buy goods produced in Slovakia they are providing employment opportunities, payment of taxes, and so forth and this means that running these campaigns and repeating them are extremely important,” he said.

Drahovský noted, however, that information about the effectiveness of these kinds of campaigns is not available – data about the extent to which the sales of goods have increased because of such campaigns.

But Timoracký does not see much impact on Slovak products as a result of such campaigns.

“According to my information, these campaigns have a negligible, if even any, effect,” Timoracký said. “If a Slovak product is really good it will establish itself by its own attractiveness and by its own marketing. It does not need to add a Slovak flag.”