SIX MONTHS after Robert Fico left the prime minister’s office and a centre-right government took over, his Smer party has introduced a shadow cabinet to present a clear opposition to the cabinet of Iveta Radičová. Most of Smer’s shadow ministers are experienced when it comes to cabinet sessions and management of government departments. 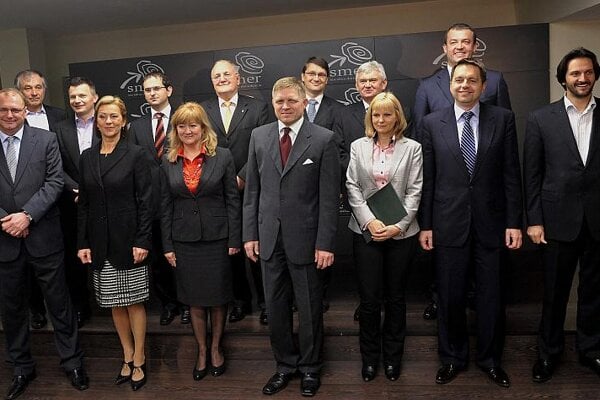 SIX MONTHS after Robert Fico left the prime minister’s office and a centre-right government took over, his Smer party has introduced a shadow cabinet to present a clear opposition to the cabinet of Iveta Radičová. Most of Smer’s shadow ministers are experienced when it comes to cabinet sessions and management of government departments.

Smer’s shadow cabinet, approved by the party presidency on January 18, is composed of a chairman, his two deputies (for human rights and minorities, and for socio-economic affairs) and 13 shadow ministers.

“I expect the shadow cabinet mainly to monitor the agenda of the government, oppose it and propose alternative solutions,” Fico said during a presentation on January 19. Fico also said he expects the shadow ministers to come up with legislative proposals, either as MPs or via Smer’s parliamentary caucus.

All of them are currently Smer MPs; Raši also serves as mayor of Košice.

Dušan Čaplovič, who formerly served as the deputy prime minister for human rights and national minorities, was entrusted with the post of Smer’s shadow education minister, while Oľga Algayerová, the former state secretary at the Foreign Ministry, is Smer’s new shadow foreign minister.

Róbert Madej, one of Smer’s youngest MPs, becomes shadow justice minister, while Vladimír Faič, another Smer MP, has been assigned the agenda of shadow minister for programme work and strategies, a department which the current government does not have.

The other big difference in structure compared to the current government is the absence of an environment brief. The Environment Ministry was cancelled shortly before the end of Fico government’s term, along with the Construction Ministry, only to be restored by the new centre-right government after the elections.

“We’re convinced that joining the Environment Ministry with the agriculture department, which we did in the last term, was right,” Fico said, as quoted by the TASR newswire.

Thus, in his shadow cabinet the environment agenda will be monitored by the shadow agriculture minister. This post is taken by another former minister, Stanislav Becík, who served as agriculture minister for a short time as a nominee of Smer’s then-junior coalition partner, the Movement for a Democratic Slovakia (HZDS). The HZDS is no longer represented in parliament. Becík became known to the Slovak public partly thanks to his journey across Slovakia in the summer of 2009 in a horse-drawn carriage festooned with banners in support of rural development.

The other non-partisan member of Fico’s shadow cabinet is Zuzana Zvolenská, who will oversee labour and social affairs. Viera Tomanová, who served for the whole of the previous term under Fico as his labour minister, is thus the only Smer former minister to be left out of the shadow cabinet.

“Mrs Tomanová has always had my trust,” Fico said, when asked why she had been overlooked by the Sme daily. “She is a person with incredibly strong social feeling.” Despite that, she was not selected as his shadow minister because Smer, according to Fico, needs someone who can deal with social policy from a distance.

Zvolenská is a board member of the private health insurer Dôvera and also its director for revisions. “I don’t see it as a conflict [of interests], it absolutely doesn’t interfere with my work duties,” Zvolenská said, as quoted by TASR.

Observers, however, pointed out that Zvolenská now is a member of the shadow cabinet of Fico, whose government passed a law which banned private health insurers from making a profit. The insurers, including Dôvera, have criticised Fico for this step and several of them have taken legal action against the state.