SLOVAK trade unions are now wheeling out one of the big guns in their fight against proposed changes to the current Labour Code, which the centre-right government says it intends to make more flexible in order to better meet the needs of the economy. The Confederation of Trade Unions (KOZ) is now trying to collect the 350,000 signatures needed to trigger a referendum over the issue. 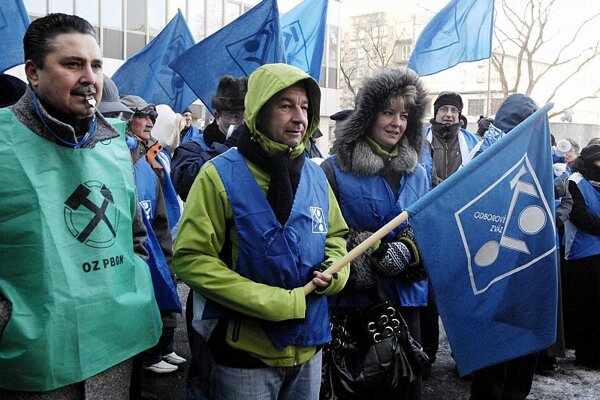 SLOVAK trade unions are now wheeling out one of the big guns in their fight against proposed changes to the current Labour Code, which the centre-right government says it intends to make more flexible in order to better meet the needs of the economy. The Confederation of Trade Unions (KOZ) is now trying to collect the 350,000 signatures needed to trigger a referendum over the issue.

The government is scheduled to discuss the draft Labour Code in April. Labour Minister Jozef Mihál says he will not yield to the pressure, nor become involved in any eventual referendum. His ministry also argues that the unions have the option to participate in the review process and put their suggestions to the working group which is mulling the new form of the code.

Meanwhile, Prime Minister Iveta Radičová has said that the government is ready for a dialogue with the trade unions – but not in the form of pressure or threats.

The unionists announced the petition on January 10, 2011, under the banner “Preserving the Rights of Employees” and claim their initiative brings new elements that will ‘humanise’ the working environment: a 35-hour week – as opposed to the current 40 hours – without a reduction in pay, as well as a limit on overtime work to a maximum of 80 hours in one calendar year.

“It is not economically sustainable,” Radičová said in response to the demands, as quoted by the SITA newswire. “There is a great probability that shortening the working week would automatically mean a reduction of income from work and we would not allow that risk.”

KOZ spokesman Otto Ewiak said that the petition is a response to what unionists see as the “threat” of large-scale revision of the current Labour Code. They claim that the planned changes would significantly reduce the protection of employees during hiring and firing, prolong the probationary period for new employees from three to six months, shorten the notice period to one month, cancel the combination of severance payment and notice period, worsen the working conditions of employees and weaken their protection during mass layoffs.

The unions say a 35-hour working week and reduced overtime might ultimately deliver new jobs and humanise work “while employees could better organise their personal lives and reduce the level of accidents and health problems,” Ewiak told The Slovak Spectator.

Ewiak explained that when citizens sign the petition it does not mean that they are agreeing with all of KOZ’s proposals; instead, it means that they agree that the questions should be set out in the referendum.

Opposition Smer party leader Robert Fico said that the fight over the new form of the Labour Code will be very significant politically.

“This is as important for us as perhaps abortion is for the Christian Democrats,” Fico said on January 9, in an interview with SITA. “We will take a very principled stand behind the protection of the form of the Labour Code and we reject the interventions that today the rightist government is talking about.”

Meanwhile, Radičová pointed out that the trade unions had signed a cooperation agreement with Smer and had also rejected an invitation to participate in the working group.

The unions responded that the government, despite several calls not only by KOZ but also by the Association of Employer Unions of Slovakia (AZZZ), had still not submitted a comprehensive proposal for changes to the Labour Code.

Ewiak argued that the referendum is a legitimate tool and a legal way to achieve the unions’ goal, which will show the degree of citizens’ interest. He said that unionists might collect as many as one million signatures.

Overall, the unions want the existing Labour Code to remain in its present form: such a proposition is in fact part of the first petition question. Ewiak argues that the Labour Ministry has not formulated specific proposals for the changes it intends to carry out and is thus limiting the space for compromise.

“We learned about the threats of the prepared Labour Code from the government’s programme statement, from statements by Mihál at the cabinet sitting, parliament, press and also from coalition politicians,” Ewiak said.

Some organisations are not so keen on the idea of a referendum. The Food Chamber of Slovakia (PKS) employers’ organisation, for instance, has objected to the petition proposal and called on the unions to halt it.

Employers united in the National Union of Employers (RÚZ) condemned the petition, and suggested that the unions’ efforts to prevent changes to the Labour Code, and their proposals to cut working hours and overtime, would “repel foreign investors and damage Slovakia’s economy”. RÚZ also said that the decision by KOZ to sign an agreement with Smer means it has lost its independence and its status as a social partner, and has instead become a satellite of the opposition party, SITA wrote.

The AZZZ said last week that it believes strikes or referendums over social issues would not contribute to the revival of the economy and the creation of new jobs.

However on January 18, the AZZZ met representatives of KOZ and found there were some Labour Code issues over which they were able to agree.

“We agreed that it is necessary to preserve the flexi-account in the revised Labour Code, nevertheless specific conditions of its functioning should be elaborated in a way that its wider and problem-free use is possible,” said AZZZ vice-president Rastislav Machunka.

Employers and unions also agreed on the need to harmonise legislation governing employees’ working time in firefighting units in the public and private sector.

Employers say one of the biggest problems with the code is the issue of the enforceability of labour laws, something which will have to be addressed by the Justice Ministry.

“In association with the elimination of labour-related legal disputes we consider it important, among other things, to legally define basic rules governing serious violations of labour discipline where in practice there are frequently conflicts, mainly over the issue of the validity of ending labour relations,” Machunka said.

There are nevertheless multiple issues over which the AZZZ and the unions continue to differ.

The American Chamber of Commerce in Slovakia (AmCham), which groups over 300 companies doing business in the country, contributed to discussion of the country’s labour law by calling for changes which AmCham said would take into consideration the specific nature of Slovakia’s economy and social system and support growth in employment while preserving the basic preconditions of Slovakia’s competitiveness.

AmCham representatives met Labour Minister Jozef Mihál on October 26, 2010, and suggested that making the legal definition of ‘dependent work’ more specific, and making termination of work contracts more flexible, would benefit the labour market. Slovakia’s Labour Code generally only covers those employees with ‘dependent work’ established through an employment relationship and does not apply to business or trade activity based on contractual civil-law or commercial-law relationships.