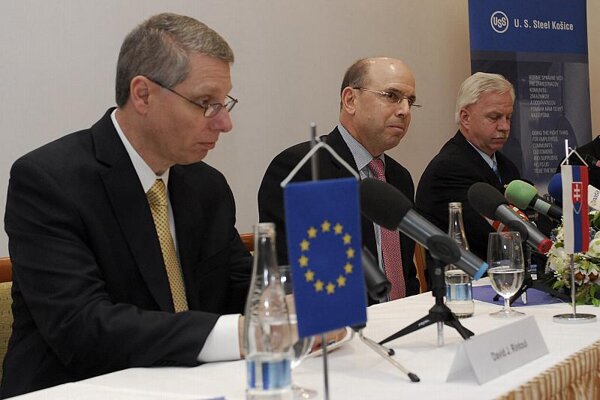 On January 17, USS Board Chairman and Chief Executive Officer John Surma introduced the new USSK president. At a press conference in Košice Surma thanked Babcoke for the work he had put in, and expressed his conviction that Rintoul, who he described as an experienced manager and qualified specialist, will maintain the excellent work of the Košice steelworks. Rintoul in turn described his appointment as an honour.

“I intend to continue achieving outstanding results with the company in the fields of safety, environment and other aspects of business,” said Rintoul. “I am looking forward to working together with the local community. I want to continue with the activities of my predecessor, and to go on adding to them.”

Babcoke described his almost three years of work in Košice as a tremendous opportunity.

“Together with the company I survived the period of worldwide financial and economic crisis,” said Babcoke, adding that he believes the company came out of it stronger and more experienced.

Currently USSK, including its daughter companies, employs 13,500 people. It hired 200 workers with special skills and education during 2010.

“2009 and 2010 represented the most complicated period in both OECD countries and North-American operations with regard to the steel market,” said Surma, adding that to date the market has not completely recovered from the global crisis.

With regards to the outlook for 2011, Surma said that there is an indication that European and American markets have begun to recover and grow, especially in the automotive industry, and this year is therefore expected to be better than the preceding two.

“We expect improvement on the market in 2011 in order to reach a point where we will be able to invest in new capacities, maybe in a tinplating line, conti-annealing lines,” said Surma. “Everything depends on market development in 2011; we are so-called careful optimists.”

With regards to capacity utilisation, the period 2004-2008 was a good one for the steelmaking industry, with 85-90 percent of capacity in European Union member countries being utilised, compared to approximately 50 percent in 2009, according to Surma. Currently, 70-75 percent of EU capacity is being used.

“Our corporation has reached slightly better figures because of the product-mix, since the market has revived,” said Surma, adding that round steel producers, for example, are still suffering because of partial stagnation in civil engineering. “We have ascertained, I hope, that the situation has been slowly getting better. We are optimistic with regard to USS performance from the long-term point of view both here in Slovakia and in the US since we see growth in the EU, a focus on production and industry as well as governmental actions that should support the economy.”

“What you have heard today should indicate to you that such intentions would be unreasonable; all the plans in Slovakia are of a long-term nature,” he emphasised.