THE INFLOW of investments from the Republic of Korea first began only in the early years of the 21st century but since that beginning this dynamic Asian country has become one of Slovakia’s most important investors and trading partners. The aggregate investment of Kia Motors into its greenfield car assembly plant in Teplička nad Váhom has already exceeded €1 billion and along with a large investment by Samsung Electronics, these two companies, plus the dozens of subcontractors they have drawn here, provide jobs for thousands of Slovaks. Cooperation between the two countries currently focuses on industry and commerce but there are also opportunities for joint activities in science and research as well as tourism on the horizon. 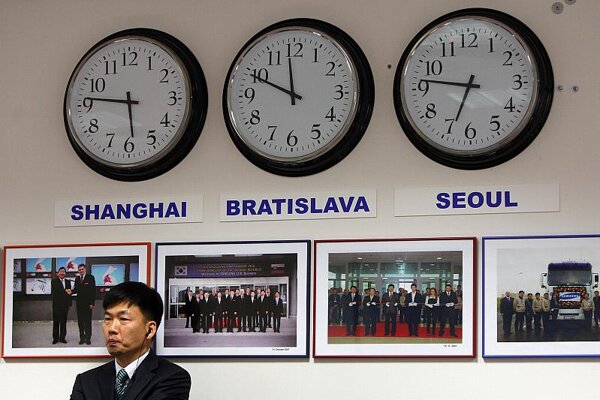 THE INFLOW of investments from the Republic of Korea first began only in the early years of the 21st century but since that beginning this dynamic Asian country has become one of Slovakia’s most important investors and trading partners. The aggregate investment of Kia Motors into its greenfield car assembly plant in Teplička nad Váhom has already exceeded €1 billion and along with a large investment by Samsung Electronics, these two companies, plus the dozens of subcontractors they have drawn here, provide jobs for thousands of Slovaks. Cooperation between the two countries currently focuses on industry and commerce but there are also opportunities for joint activities in science and research as well as tourism on the horizon.

“The Republic of Korea is one of the most important economic partners of Slovakia outside of Europe, with a huge potential for further development of bilateral economic and commercial cooperation,” Dagmar Hlavatá of the Slovak Economy Ministry told The Slovak Spectator, adding that the level of cooperation has been assessed very positively from both sides.

“Korean companies have been creating a significant group of foreign investors in Slovakia,” Lucia Guzlejová, the head of the foreign direct investments section at the Slovak Investment and Trade Development Agency (SARIO), told The Slovak Spectator. Adding up the individual projects, Korean entrepreneurs rank as high as second in the total number of investors which have established operations in Slovakia with the help of SARIO during recent years. Korean investment projects focus especially on facilities in the automotive and electronics industries.

In total, about 70 Korean companies have operations in Slovakia and they employ almost 20,000 people, with Kia Motors Slovakia and Samsung Electronics employing the largest numbers.

“The presence of these key players has helped draw many other companies which followed their customers and simultaneously this presence keeps contributing to the attractiveness of Slovakia in eyes of potential Korean investors,” said Guzlejová. “A satisfied Korean businessman operating in Slovakia is the best reference.”

Based on discussion between SARIO experts and established as well as potential investors, Guzlejová said Slovakia is perceived not only as a business-friendly environment but also as a very pleasant place to live.

At the current time SARIO is working on several concrete Korean investment projects even though, like many other countries, SARIO registered a slowdown in foreign direct investment between 2008 and 2009 because of the economic crisis.

“Investors were instead choosing a wait-and-see approach and have been thinking over their decisions significantly longer; but 2010 already brought signals of a revival of investment activities and more significant interest from businesses in investing in Slovakia, not only from Korea,” said Guzlejová, adding that current projects in SARIO’s pipeline deal with manufacture of electrical and electronic appliances, rubber and plastic products, car components and similar products.

Between 2002 and 2010 SARIO successfully handled 39 Korean investment projects with a total value of €1.7 billion which had the potential to create over 16,000 jobs.

Guzlejová said Korean entrepreneurs very much esteem personal contacts and it is ideal if they are able to communicate directly in their native language because communicating in English is sometimes problematic. This is why part of SARIO’s website is in the Korean language and some informational materials about Slovakia's business environment are available in Korean versions. SARIO plans to continue widening the scope of information available in the Korean language as Guzlejová said these efforts are perceived very positively.

SARIO representatives have been regularly attending events designed to present the investment environment in Slovakia and the Visegrad Group region (Slovakia, the Czech Republic, Hungary and Poland) that were organised by various chambers of commerce and investment agencies in Seoul over the past several years. Unfortunately, experts from SARIO were not able to attend an event like this in 2010 but plans are underway this year to intensify existing contacts as well to establish new ones.

Seminars like these, not only in the Republic of Korean but also in other countries, serve as a way of introducing Slovakia and its attractiveness as well as a vehicle for networking and making new contacts. The seminars are often followed by personal meetings with representatives of interested companies and Guzlejová considers these personal contacts to be more effective than just communication via e-mail.

When quoting potential investors from the Republic of Korea about Slovakia’s main advantages Guzlejová speaks about a qualified and available labour force, a strategic geographic location, low income taxes, developed commercial contacts with western as well as eastern countries, membership in the Schengen and euro zones as well as in significant international organisations in Slovakia.

She admitted, however, that investors also see some limiting factors such as an unfinished highway network, increasing labour costs along with high payroll taxes, a brain-drain and ageing of the population, and rising energy prices.

Trade between Slovakia and the Republic of Korea had been increasing steeply before 2009 when its further growth was stopped by the global economic crisis. Imports as well as exports were growing but imports dominated because of Korea’s position as one of Slovakia’s most significant investors and the corollary imports of Korean technologies into Slovakia for facilities producing car components and electronic devices.

“However, products made by companies with Korean capital are to a large extent destined for export from Slovakia into third countries,” said Hlavatá, explaining that Slovakia’s trade balance with the Republic of Korea looks unfavourable only when bilateral trade alone is considered.

The Slovak Economy Ministry views the signing of the Free Trade Agreement between the European Union and the Republic of Korea that becomes effective on July 1, 2011, as a significant step that will lead to further development of mutual relations.

“Last but not least it is necessary to pay attention to promotion of Slovakia as an attractive destination for tourists,” said Hlavatá. “Korean tourists travel a lot and Europe with its history, culture and art is attractive for them. Annually, 20,000 to 30,000 Korean tourists arrive in Slovakia and with respect to the distance between the two countries this is a very favourable figure.”

Korean tourists are willing to spend a large amount of money when travelling but their stays tend to be short, the Economy Ministry reported, with an average Korean tourist visiting Europe for only around five days and seeking to visit several countries during the trip. For this reason the Economy Ministry said Slovakia may need to seek more cooperation with other Visegrad Four countries in promoting the entire region.