AT LEAST four Slovaks were at Domodedovo Airport in Moscow in the moments when a terrorist bomb blast killed at least 35 people and injured another 130 on January 24. Slovak actress Zuzana Fialová suffered minor injuries from the blast and was hospitalised in one of Moscow’s hospitals. 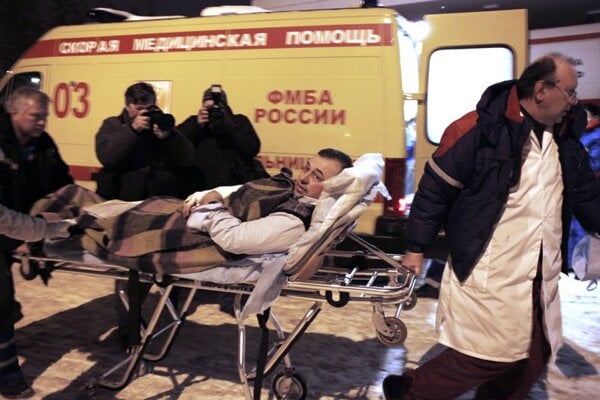 A terrorist bomb blast killed at least 35 people and injured another 130 on January 24 in Moscow. (Source: AP / TASR)
Font size:A-|A+0

AT LEAST four Slovaks were at Domodedovo Airport in Moscow in the moments when a terrorist bomb blast killed at least 35 people and injured another 130 on January 24. Slovak actress Zuzana Fialová suffered minor injuries from the blast and was hospitalised in one of Moscow’s hospitals.

Fialová, along with her colleague Ľuboš Kostelný and his sister, was queuing for luggage when the suicide attacker detonated the explosive, which Russian media reported consisted of around 7 kg of TNT. Kostelný told the Sme daily that they were standing about 4 metres from the bomber, believed to be a terrorist from the North Caucasus.

The Sme daily wrote that no Slovak had ever experienced a terrorist attack from such a close distance.

“It threw Zuzka on the ground,” Kostelný said, adding that she was hit by several shreds of the bomb and one cut her ear. She also suffered shock and was transferred to one of Moscow’s hospitals where she remained on the morning of January 25.

“It’s swinishness,” Fialová said in her only reaction to what had happened. Her partner, Peter Matulík, was in regular contact with her and he also contacted the Slovak Embassy in Moscow and learned that mobile phone connections in Moscow, especially in the vicinity of the airport, were turned off for security reasons by the Russian authorities, “probably in order to prevent someone else from setting of another bomb by mobile phone”, Sme reported.

The Slovak actors took a commercial flight from Vienna to visit Moscow theatre and ‘do some shopping’, Sme reported, and the Student Travel Agency told the newspaper that it had sold five tickets on that flight to Slovaks. The Slovak Foreign Affairs Ministry had no information about any other Slovaks who were at the airport during the bomb attack.

In the aftermath of the bombing, Slovakia’s highest officials, Prime Minister Iveta Radičová and President Ivan Gašparovič, as well as Foreign Minister Mikuláš Dzurinda sent letters of condolences to their Russian counterparts.

Slovak Prime Minister Iveta Radičová wrote in her telegram to her Russian counterpart, Vladimir Putin, that she was shocked to hear about the bomb blast that killed more than 30 at the Domodedovo Airport.

“The unacceptability of terrorism is an expression of our deepest resolution and belief,” Radičová wrote. “In the 21st century we cannot tolerate hurting innocent people.”

Dzurinda wrote there is no excuse for such acts of terror, Sme reported.

“The Slovak Republic strictly rejects and condemns any form of terrorist acts and violence,” Dzurinda wrote.