SLOVAKIA’S Constitutional Court delivered two major rulings in a single day on January 26. It decided that legislation passed by the last government prohibiting private health insurers from paying dividends to their shareholders or deciding what to do with their profits violates Slovakia’s constitution. In the second case the Constitutional Court ruled that an amendment to Slovakia’s highway construction legislation that permitted the state to begin building highways on privately-owned land before the land expropriation process is completed – also the work of the previous government – is unconstitutional. 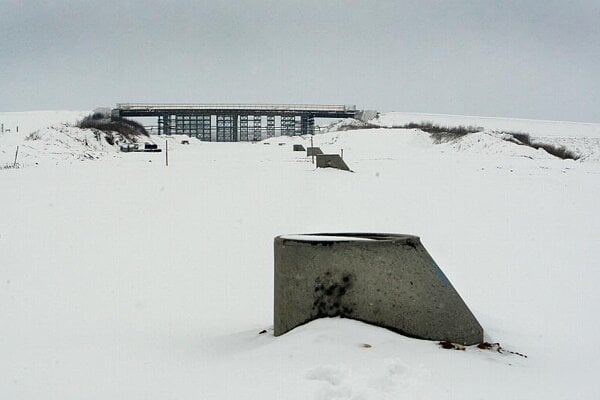 SLOVAKIA’S Constitutional Court delivered two major rulings in a single day on January 26. It decided that legislation passed by the last government prohibiting private health insurers from paying dividends to their shareholders or deciding what to do with their profits violates Slovakia’s constitution. In the second case the Constitutional Court ruled that an amendment to Slovakia’s highway construction legislation that permitted the state to begin building highways on privately-owned land before the land expropriation process is completed – also the work of the previous government – is unconstitutional.

While the current government of Iveta Radičová welcomed the court’s decisions, the leader of the opposition Smer party, Robert Fico, who also led the previous government and had championed both pieces of legislation, was somewhat reserved, saying that he “would not slam the court” for its decisions.

“We respect each and every decision of the Constitutional Court,” Fico told a press conference on January 26, while calling on the current government to change both laws in a way that “achieves faster highway construction” and prevents what he said was “health insurers taking away people’s money”.

Observers pointed out that it has taken several years for the court to deliver the verdicts, during which time Fico’s government was replaced by the Radičová-led centre-right coalition following parliamentary elections in 2010. The Finance Ministry revealed in mid January 2011 that the government had spent more than €15.5 million in legal fees defending the law on health insurers’ profits in international arbitration procedures, the SITA newswire reported.

Finance Minister Ivan Mikloš reacted to the rulings by saying that when the legislation was being pursued by Fico’s government the then opposition, as well as professionals, had warned that it could significantly damage the citizens of Slovakia as well as the country itself.

“It [the ruling] clearly shows that steps by the previous government were irresponsible in this area,” Mikloš said, as quoted by SITA.

Regarding the legislation commonly referred to as the expropriation law, the Constitutional Court ruled that neither the state nor any other body can start building highways on property that is not fully owned by them. The court in its press release said that the affected owners were in fact disadvantaged compared to other owners of land. The challenged provisions allowed a situation in which they formally remained owners of the real estate, but de facto could not carry out traditional rights of the ownership law, the court wrote.

The Constitutional Court also ruled that the health insurance legislation fundamentally restricted the property rights of health insurers’ shareholders. According to the court, the government interfered in insurers’ right to do business in health insurance by depriving them of the right to make autonomous decisions over the use of their profits. It found that the restriction was not in accord with the constitution.

Fico, who is now a deputy speaker of parliament, had refused to represent parliament at the Constitutional Court hearing in the health insurance case. Mikloš suggested that this showed Fico was afraid to defend the decisions of his own government, the TASR newswire reported.

Nevertheless, Fico said that the Constitutional Court’s ruling was a pyrrhic victory.

“If one owner of a garden is to stand against the public interest, then deputies of the current ruling coalition have achieved a pyrrhic victory,” said Fico. “Is there a general interest in highway construction? There is. Slovakia is losing competitiveness because it has been slowing down highway construction. I am calling on the government to prepare a new law that makes possible the fast construction of highways.”

According to the court’s official release, the legislation on one-time measures pertaining to highway construction put inappropriate pressure on all owners to be forthcoming towards the builders of the highways. The challenged provisions quasi-legalised construction which would otherwise be considered illegal by allowing construction of, in effect, non-removable construction on property without the consent of the property’s owner, the Constitutional Court found.

Interior Minister Daniel Lipšic said that the state will now have to pay compensation to people who have had their land expropriated since the law came into effect.

In January 2008, a group of opposition MPs asked the Constitutional Court to review the expropriation law and requested a preliminary injunction to halt the use of the law for one-off extraordinary measures to acquire land to initiate state highway and dual-carriageway projects. The court denied the preliminary injunction but agreed to review the constitutionality of the amendment.

Lipšic, at that time an MP for the Christian Democratic Movement (KDH), called the law an unconstitutional, flagrant violation of ownership rights, one of the most basic human rights.

The Fico government passed the amendment to Slovakia’s highway legislation in 2007. It changed the deadline for completing the expropriation process from before construction starts, as it stood under the original law, to when the final inspection of the construction is underway. The original law permitted this method only in exceptional cases. The change in the law is estimated to have affected almost 39,000 property owners with land on or adjacent to the planned highways, according to the Sme daily. Of these, expropriation orders were filed against 1,338 owners; most of the others are believed to have sold in anticipation of being ordered to do so.

Then-transport minister Ľubomír Vážny argued at the time the legislation was adopted that without the change several additional years would be required to negotiate with property owners before construction could begin on the government’s ambitious programme to build new highways.
Jozef Vozár, deputy head of the Institute of State and Law at the Slovak Academy of Sciences told The Slovak Spectator in 2008 that “achieving construction through means that limit that which lies at the core of ownership rights – preventing landowners from defending themselves against expropriation or inequitable compensation for their land – is unacceptable in a lawful state”. He was convinced that the act contravened the Slovak constitution.

The court decided that the legislation pertaining to health insurers unacceptably interfered with the right of private health insurers to run a business. At the same time the content of their licence to provide public health insurance had been significantly modified as well, the court said in its official release.

The Fico government decided in 2007 that providing mandatory health insurance in Slovakia should not be a profit-making business and amended the law on health insurance to prohibit private health insurers from paying dividends to their shareholders, requiring them instead to channel any profits back into the health-care system. The law became effective in January 2008. The private health insurers operating in Slovakia objected that the legislation was hostile to investments made by their major shareholders and two of the insurers subsequently presented their arguments before international courts.

In 2008, a group of 49 members of the Slovak parliament also asked the Constitutional Court to review the law, arguing that the amendment contradicted the constitution as well as international laws.

Defending the legislation in 2007, Fico told public broadcaster Slovak Radio that the previous, centre-right government’s aim had been “to allow someone, mainly foreign firms, to access public resources and gradually carve off huge profits from these resources. People are now required to pay money for insurance premiums to the insurers and it is absolutely unacceptable to us to allow someone to keep part of this money”.

The European Commission started reviewing the legislation in 2009 to determine if Slovakia had breached EU legislation and sent a letter of formal notice to the country to begin that process.

“It seems that the imposition of an absolute prohibition on privately-owned public health insurance providers from using their profits other than for the provision of public health care in the Slovak Republic constitutes an unjustified restriction on the freedom of capital movements,” the spokesman for EC Commissioner for the Internal Market and Services Charlie McCreevy told The Slovak Spectator in 2009.

Slovakia’s Association of Health Insurers (ZZP) warned several times that the legislation would conflict with international agreements on the protection of investments, as well with EU law and Slovakia’s constitution.

ZZP director Eduard Kováč told The Slovak Spectator at the time that the adopted legislation interfered with the ownership rights of shareholders, and that the state can interfere with ownership rights only if certain conditions are met: if intervention is unavoidable; if it is demonstrably in the public interest; and if there is adequate compensation.