WOMEN and men in elegant evening clothes surrounding a roulette table in a casino, or a group of fans watching a sports match on TV in a betting shop, or those sitting on stools behind slot machines in a pub: what do they have in common? A passion for games of chance. Slovaks like gambling and, had it not been for the economic crisis, it is thought that the amount of money that Slovaks spent on various kinds of gambling would have continued to soar over the past two years. 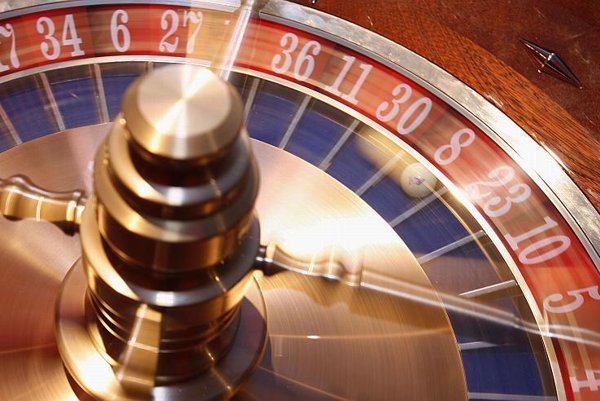 Games of chance and online and parlour betting are popular among Slovaks. (Source: Reuters)
Font size:A-|A+0

WOMEN and men in elegant evening clothes surrounding a roulette table in a casino, or a group of fans watching a sports match on TV in a betting shop, or those sitting on stools behind slot machines in a pub: what do they have in common? A passion for games of chance. Slovaks like gambling and, had it not been for the economic crisis, it is thought that the amount of money that Slovaks spent on various kinds of gambling would have continued to soar over the past two years.

Slovaks wagered almost €2 billion in 2010 on all kinds of games of chance, in betting parlours and via gaming machines, according to preliminary figures from the country’s Finance Ministry, doubling the €1 billion they spent in 2004. The ministry’s statistics show that wagering in Slovakia peaked in 2008 at €2.163 billion, rising by more than 20 percent from the level of €1.786 billion in 2007. But the economic crisis that began at the end of 2008 clearly affected the gaming business, with spending falling to €2.07 billion in 2009 and then further still in 2010.

The Finance Ministry also reported that Slovaks were able to garner wins amounting to €1.5 billion from their wagers in 2010 and that the most popular form of gambling was via gaming machines, with €617 million in revenues, followed by videogames, close behind with €577 million of revenues in 2010.

Videogames registered the largest increase in customers and money bet, with the Finance Ministry reporting that €577 million was wagered via this kind of gambling in 2010, more than tripling the level of €129 million in 2007.

If a licence applicant fulfils all the requirements under the state law the municipality must issue a licence. For that reason Slovak towns and villages’ ability to restrict businesses offering what some call a “moral hazard” from operating within their municipality is very limited.

Many municipalities perceive these restricted powers as problematic. Even though gaming machines bring additional revenue to municipal budgets, some municipal officials say they would rather deal with the loss of this revenue than with the social problems they perceive are linked with pathological gambling.

Slovakia’s Tax Directorate reported that there were about 17,300 gaming machines operating in various venues throughout the country in 2010.

There are two dominant companies operating casinos in Slovakia. Casinos Slovakia was established in 1990 and opened its first casino in Piešťany in 1991, according to its website. It later opened a casino in Prešov which later moved to Košice. Its biggest and most prestigious property is Casino-Cafe Reduta in Bratislava which opened in 1994. In 2007 it also opened casinos in Nitra and Žilina.

Olympic Casino entered the Slovak market in 2008 and now operates three casinos: in Bratislava’s Carlton Hotel, the largest casino in Slovakia; in the Arkadia shopping centre in Trnava; and in the new Eurovea complex on the banks of the Danube in Bratislava.

Another casino, Regency, operates within the Crowne Plaza Hotel in Bratislava.

According to Jozef Skubeň, the head of Olympic Casino Slovakia, the popularity of casino gaming in Slovakia has been gradually growing but the poor health of the economy has affected the sector and people are more cautious when visiting a casino, the TASR newswire wrote.

Skubeň’s ambition is to make a visit to one of his company’s casinos about more than just gaming and to offer visitors Las Vegas-style entertainment interconnected with events such as film premieres, live music, fashion shows or poker tournaments. Skubeň expects that with such offerings an investment of €1.3 million in the casino at Eurovea might begin to have returns within five to eight years.

The average guest at a Slovak casino spends between €35 and €50, Skubeň said, adding that “there are some players who play only €5 but also those who play for €5,000,” as quoted by TASR.

Many of the guests at casinos in Slovakia are foreign tourists and Skubeň estimated that they make up about 50 percent of the clientele at Olympic Casino’s properties. Austrians and Italians, coming from countries with very old casino traditions, are among regular visitors to Slovakia’s casinos. Skubeň added that younger Slovaks visit his firm’s casinos more often than do older Slovaks.

Many Slovaks love playing various kinds of lotteries and betting on sports matches as well as on other kinds of events, for example, political elections. In addition to private betting companies (the first post-1989 betting company was Prvá slovenská stávková spoločnosť Niké, which began operating in early 1991, followed by Victory Tip, Fortuna SK and others) there is a state-owned lottery and betting company, Tipos. Betting on horses is also available as part of the entertainment at the Petržalka racetrack in Bratislava.

“Betting is very popular in Slovakia,” Roman Berger, the operating director of Niké, told The Slovak Spectator. “It has a large group of enthusiasts especially among sports fans. For them tipping results is not only [seen as] the path to huge wins but simultaneously adds an element of special excitement to the matches on their tickets.”

Berger sees a difference in the amount of betting in Slovakia in comparison with other countries, saying that the poorer a country is, the larger is the number of citizens who are searching for ways to make some extra money, opining that in Slovakia betting on sporting events is one of the little ways in which people can win money relatively easily and quickly.

Slovaks like to bet on football, ice hockey, and tennis matches, Berger said.

Niké and Fortuna SK enable bettors to wager on events other than sports. These have included parliamentary and presidential elections, film awards such as the Oscars and the Czech Lions, and even TV contests like last year’s Talentmánia show.

Because Slovaks show quite an interest in such betting opportunities these kinds of wagers are not expected to disappear from betting companies’ offers. But according to Fortuna SK, betting companies must apply for special permission from the Finance Ministry before they can offer such bets and that significantly shortens the time period during which this kind of betting can occur.

“In spite of this, these events meet with a relatively sound response among bettors and that is proved by bets of €1,000 or more,” Marian Varga, the senior bookmaker at Fortuna SK, told The Slovak Spectator. “For example, prior to the most recent parliamentary election, one bettor wagered €2,000 with odds of 1.2:1 that the Christian Democratic Movement (KDH) would get more votes during the election than the Slovak National Party.”

The availability of gambling opportunities on the internet has also been changing the nature of placing bets.

“This is a more comfortable way of betting,” said Varga, adding that last year Fortuna SK’s number of customers grew by over 25 percent, particularly as a result of increasing numbers using the internet to place bets.

Niké has a network of over 850 betting parlours in Slovakia but said that internet betting is a phenomenon that has been advancing at a robust pace. Berger expects the number of internet bettors to grow dramatically in coming years.

Ľubomír Okruhlica, head of the Centre for Treatment of Drug Dependencies in Bratislava, said the centre also deals with gambling addiction and described Slovaks’ relationship with games of chance as “naive".

“Slovaks – compared to Austria and most of the western part of the European Union – are more prone to become pathological players due to the extensive exposition of intensive and little-regulated advertising by this industry,” Okruhlica told The Slovak Spectator.

Okruhlica said that passions flowing from gaming stimulate some of the first-developed centres of the human brain in a way similar to adrenaline sports or drinking alcohol.

A player becomes pathological, according to Okruhlica, when he or she loses personal control and cannot resist the impulse or the need to gamble, or is not able to stop making wagers, or when a person continues to gamble even after exceeding a certain limit that he or she had established.

Okruhlica believes that gaming machines that are very accessible to the public are the most dangerous in cultivating an addiction to gambling.

“They [gaming machines] do not require a cultivated personal appearance as do most casinos; they do not require complex intellectual thinking; and they are located right in pubs or places where a lot of people congregate, for example in bus and railway stations or close to them,” Okruhlica said.