JUDICIAL clerks working in Slovakia’s courts can no longer expect guaranteed and largely silent promotion to positions as judges, and sitting judges will have to get used to much more personal information about them being made public, after parliament passed a law on judges which the government is presenting as a breakthrough reform in its drive to restore public trust in the judiciary. The opposition, however, is complaining that the changes are unconstitutional. 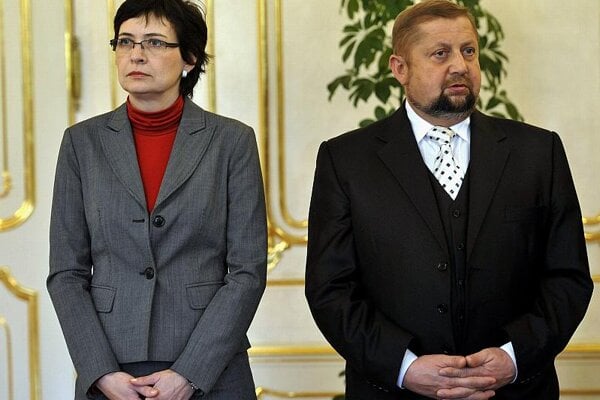 JUDICIAL clerks working in Slovakia’s courts can no longer expect guaranteed and largely silent promotion to positions as judges, and sitting judges will have to get used to much more personal information about them being made public, after parliament passed a law on judges which the government is presenting as a breakthrough reform in its drive to restore public trust in the judiciary. The opposition, however, is complaining that the changes are unconstitutional.

On February 1 parliament overrode a presidential veto of the amended law on judges, which was authored by Justice Minister Lucia Žitňanská. The amendment aims, according to Žitňanská, to help open up the judiciary to public scrutiny and public control. It institutes the publication of all court rulings on the internet, cancels discretionary bonuses for judges currently awarded by court presidents, requires more detailed asset declarations by judges, and introduces public selection procedures for judges and court presidents.

“The amendment contains several positive changes which could help to reform the judiciary, open it up to public control and increase its trustworthiness,” Peter Wilfling, a lawyer who cooperates with the legal NGO Via Iuris, told The Slovak Spectator. One of the changes he highlighted is the automatic publication of court rulings, a practice that Slovak courts still resist. Another change, giving judges the opportunity to publish a dissenting opinion in cases where they are outnumbered by other members of the court senate, will increase the personal responsibility of judges for rulings, according to Wilfling “as they will no longer be able to ‘hide’ behind the statement that they were overridden by other senate members”.

As of May 2011, judges will be appointed to fill vacancies in all courts only via a public selection process, as opposed to the current practice of judicial clerks being promoted to become judges at district courts without any selection procedure.

Under the new rules, a five-member commission will make each selection. The commission will be appointed by the president of the court in question, and drawn from a database of people nominated by parliament (one member on each commission), the national Judicial Council (one member), the justice minister (two members) and the judicial council of the respective court (one member).

Candidates for judicial positions will be required to provide a list of any judges, court employees, or employees of the Justice Ministry and all its related organisations to whom they are related or with whom they have a close relationship. A similar declaration will also be required on a yearly basis from sitting judges.

All documentation about candidates, including their CVs and their ties to members of the selection commission, will be made publicly available.

“The reform of the judiciary is one of the most important reform steps of the Slovak government,” said Prime Minister Iveta Radičová after parliament re-approved the amendment.

“Therefore I regard the passing of this amendment as an important step towards restoring trust in the institution of the Slovak Republic, and mainly trust in its judiciary,” Radičová said.

She pointed out that Justice Minister Žitňanská gave up some of her powers in favour of the reform. The minister will no longer have the authority to decide about temporary suspension of judges; that power now passes to disciplinary senates, the Justice Ministry reported.

“We went for a new approach, which started off with telling the truth about the state of judiciary, by proposing changes in favour of the ordinary participants in court proceedings, and by fighting cronyism in the selection of new judges,” Žitňanská said, adding that judging from the strong reactions the passing of the amendment has provoked, “we have touched a sensitive spot for [opposition party] Smer, [former prime minister Vladimír] Mečiar and [Supreme Court President Štefan] Harabin”.

However, Peter Wilfling pointed to at least one provision which he regards as problematic. It allows the justice minister to dismiss the president of a court for any reason, and denies the judge in question the opportunity to require an investigation into whether his or her dismissal was lawful.

Harabin dubbed the law “the worst possible solution for the judiciary”, and said he was very disappointed about the fact that he was not allowed to speak in the debate about the amendment in parliament.

Harabin was particularly opposed to the newly-introduced selection process for judges and said that there is nothing wrong with the fact that the children of judges follow in the footsteps of their parents and enter the same profession. Harabin himself has a son who currently works as a judicial clerk.

“I invite Žitňanská to test my son [to see] whether he is professionally weak,” Harabin said, as quoted by the Sme daily. “I dare to say that he is on a better professional level than Žitňanská.”

Žitňanská maintains that judicial clerks should not have guaranteed future positions as judges and that they should be submitted to a selection process and face open competition.

Opposition MP Róbert Madej, who is also Smer’s shadow justice minister, said the ruling coalition is attempting to win political control over the judiciary. He believes the amendment is unconstitutional and plans to file a complaint with the Constitutional Court, the TASR newswire reported.