A treaty on citizenship?

DESPITE rather frequent meetings between Slovak and Hungarian leaders during recent weeks, the issue of dual citizenship – which has became a bone of contention in the two countries’ bilateral relations, even though governments changed on both sides of the Danube during 2010 – still remains unresolved and never fails to produce strong emotions among both Slovaks and Hungarians. 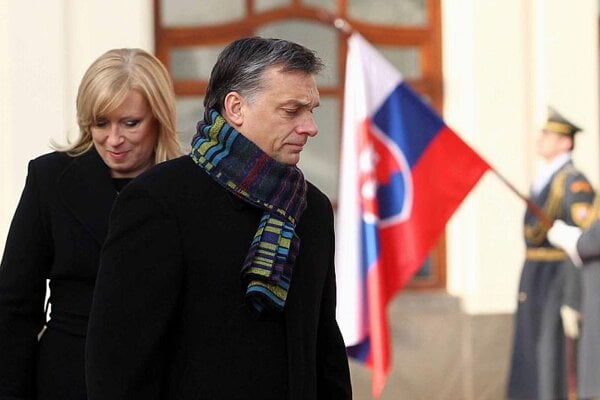 DESPITE rather frequent meetings between Slovak and Hungarian leaders during recent weeks, the issue of dual citizenship – which has became a bone of contention in the two countries’ bilateral relations, even though governments changed on both sides of the Danube during 2010 – still remains unresolved and never fails to produce strong emotions among both Slovaks and Hungarians.

The issue arose when, in almost its first act, the newly-installed Viktor Orbán government in Budapest amended Hungary’s legislation on citizenship, enabling ethnic Hungarians living in other countries, including Slovakia, to relatively easily acquire Hungarian citizenship. Around 10 percent of Slovakia’s population is regarded as ethnically Hungarian. The Slovak government, then led by Robert Fico, responded by passing an amendment to Slovakia’s Citizenship Act specifying that if any Slovak citizen sought to obtain the citizenship of another country he or she would automatically lose their Slovak citizenship.

Dual citizenship was discussed during an official visit by Prime Minister Orbán to Slovakia on January 28. At their meeting Slovak Prime Minister Iveta Radičová proposed that they pursue a bilateral treaty, similar to the one that Slovakia has with the Czech Republic, which would deal with the conditions for awarding dual citizenship. Slovakia said it would submit a proposed treaty to the intergovernmental commission for state citizenship at its mid-February session.

“It is in the Slovak interest that citizens who live in Slovakia are Slovak citizens, [and] that they live, work and build their relationships with the state where they live,” Radičová said, as quoted by the SITA newswire. She added that Orbán told her that his country would not pursue a campaign to encourage Slovak citizens to seek Hungarian citizenship via the amended law.

Radičová said it is hard to tell when a treaty might be signed, as she does not know how many comments the Hungarian side will make. She said she believes that a bilateral treaty is the only possible solution to the situation.

The Hungarian prime minister said that the efforts to sign a bilateral treaty on dual citizenship failed during the previous Slovak government, but there is no reason why the new Slovak proposal should not be considered as the atmosphere is now much better for cooperation, after the change of the government. Orbán added that previous experience had shown that the Hungarian citizenship law “does not come from the devil” and that applications for Hungarian citizenship are assessed individually and very strictly.

Political analyst Ábel Ravasz, however, does not expect the Hungarian government to sign any such treaty, despite the fact that bilateral solutions to minority questions have plenty of precedents in Europe, such as the Austria-Italy or Bosnia-Croatia agreements.

“Orbán has already expressed his belief that the issue of dual citizenship is part of domestic policy – and only part of domestic policy,” Ravasz told The Slovak Spectator. “It is difficult to imagine Fidesz [Orbán’s party] taking a step backwards: they are known for being tough and bold when it comes to dealing with international issues.”

Political analyst Marek Rybář of the political science department of Bratislava’s Comenius University said that a bilateral treaty would be a normal solution, citing the one that exists between Slovakia and the Czech Republic.

“In my view, the intention of a bilateral treaty is acceptable for both sides, but obviously each of them has a different opinion about what its content should be,” Rybář told The Slovak Spectator, adding that while the Hungarian side wants Slovaks granted Hungarian citizenship to have the right to vote in Hungarian elections, this is unacceptable for the Slovak government because it would mean that Hungarian election campaigns would closely affect Slovakia.

“From that point of view it’s far from guaranteed that Slovakia and Hungary can agree on such a treaty,” Rybář said.

Meanwhile, the Slovak cabinet has passed a draft revision of the Citizenship Act which would remove the provision that allows those who acquire the citizenship of another state to be stripped of their Slovak citizenship. At the same time, however, the cabinet approved a proposal by the Christian Democratic Movement (KDH) to ban dual citizenship for police, army, intelligence services and security officers. Public officials who work with classified documents will also be banned from holding dual citizenship.

Rybář said that it is understandable from the viewpoint of the Slovak government that they are trying to solve the situation also by amending the law, but an amendment is not enough to help to improve mutual relations and solve the problem.

“The law is a defensive, one-sided step in any case,” Rybář said. “So it would be preferable, in order to have stable and predictable relations, to have a bilateral treaty.”

The Slovak parliament is expected to vote on the draft amendment during its current session, but the outcome is hard to predict, particularly because Igor Matovič, who leads the Ordinary People faction within the Freedom and Solidarity (SaS) caucus, has dismissed the proposed revision. He wants to retain the facility to remove Slovak citizenship from people who obtain the citizenship of other countries if they have not lived, worked, studied or done business there for at least a year, or if their relatives do not hail from the state in question.