A FAIRER law giving more protection to those who need it the most is one of the banners under which the government of Iveta Radičová unveiled the contours of its planned changes to the country’s Labour Code. The centre-right government also said it intends to make the law more flexible to better meet the needs of the economy while reducing unnecessary bureaucracy. 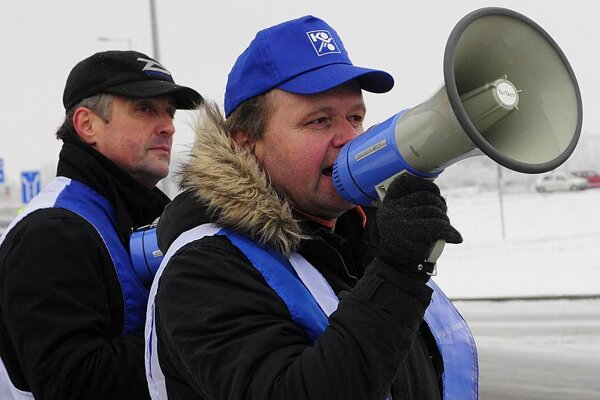 A FAIRER law giving more protection to those who need it the most is one of the banners under which the government of Iveta Radičová unveiled the contours of its planned changes to the country’s Labour Code. The centre-right government also said it intends to make the law more flexible to better meet the needs of the economy while reducing unnecessary bureaucracy.

The stakes are high for Slovakia’s trade unions. In January the unions initiated a petition drive that could lead to a national referendum. After Radičová presented the government’s propositions for changes to the code on January 31, the Confederation of Trade Unions (KOZ) responded that it will further discuss the theses with Radičová and Minister of Labour Jozef Mihál on February 10.

Slovakia’s employer associations were reserved in their initial responses and said they wanted to first have a thorough discussion involving voices from various segments of society.

Radičová said that the proposed amendments to the Labour Code are designed to “protect those who need that protection the most” while the degree of protection would depend on an employee’s qualifications, salary and the number of years of employment at a company.

“The lower the salary and the lower the position within the company, the higher the level of protection for an employee,” Radičová said, as quoted by the TASR newswire.

In its official release, the ministry stated that its proposed Labour Code will be more family-friendly, giving both employers and employees an option to work flexible hours based on their own needs. The ministry gave an example of an employer having the opportunity to distribute tasks linked to one specific work position among several employees by creating a shared position. The possibility of using parental leave until a child’s 5th year is also on the ministry’s list of changes.

The government is also proposing a shorter probationary period for employees in lower positions while designating longer periods for positions with higher pay. The proposal provides an employer with the option of negotiating a flexible combination of severance pay and layoff notice with an employee, while the minimum notice period would depend on the number of years of employment with a firm or organisation.

The ministry listed five reasons why it is seeking to amend the Labour Code, stating first that the law’s current form is unfair because it does not take into consideration the different status of employees based on their salary levels or positions in a firm. The ministry stated that a low-level worker needs more protection than a top manager who has decision-making powers. Another reason for change, according to the ministry, is that the current law does not reflect different life situations linked with students’ employment or parents with small children. It also stated that some parts of the Labour Code burden both employees and employers with redundant bureaucracy.

The ministry said the current law lacks flexibility in regards to employees changing jobs as well as in the possibility of employees seeking higher earnings.

The fifth criticism the ministry offered to the current code is that it mandates unnecessary privileges to public officials and union representatives at the expense of social dialogue, collective bargaining and equal representation of all employees.

Ondrej Matejka, a lawyer and advisor to the Association of Employer Unions of Slovakia (AZZZ), told The Slovak Spectator that the proposals by the government respond to the challenge of keeping Slovakia’s economy competitive with economies of other central and eastern European countries and would create conditions to sustain or even increase employment.

Matejka said he sees the proposed amendment as a modern approach to regulation of the labour market but added that it does not deal with all the areas he considers to be problematic. He stated he is positive about the prospect of more flexible legal work relationships and reducing employers’ administrative burden as well as introducing complete flexibility in working time.

Matejka noted, however, that the proposed ways of terminating an employment contract might be conflicting and said the rationale for stretching parental leave to five years needs to be explained sufficiently. He added that it will be necessary to carefully assess how the work habits and skills of a parent on long-term parental leave can be preserved so that an employer’s operational regime is not damaged.

Matejka also called for more exact definitions in the law for violations of working discipline or at least clearer categories such as serious or less serious violations, noting that the actual interpretation of these violations and categories would be determined through real-life cases since many court trials are charged with assessing these specific circumstances.

“The absence of these legal definitions is exactly the reason for the high number of workplace conflicts that go to court and their related impact not only on economy but also on the legal certainty of the subjects of these relations,” Matejka told The Slovak Spectator.

Matejka also suggested that senates or panels could be created for resolving such conflicts based on a bipartite or tripartite principle involving qualified representatives of employers and employees or using mediators or through collective bargaining.

Matejka also urged that the law should introduce a specific employment contract for managers that would permit the highest possible flexibility in working conditions within the legislative parameters and which would, in particular, deal with abuse of know-how and trade secrets of an employer.

Employers also want to see a widening of the possibility to use different types of temporary workers, Matejka said.

Juraj Borgula, vice-president of the Federation of Mechanical Engineering of the Slovak Republic, told The Slovak Spectator that the government’s propositions are giving him the impression that the ministry also intends to change some of the basic premises of the Labour Code, pointing specifically to the shifting of some matters, such as working hours or starting or ending employment relationships, from regulation under the law to collective or individual bargaining.

Borgula added that he considers the proposed definitions regarding the legitimacy of unions or employee councils in representing employees to be problematic.

Miroslav Gazdík, the president of KOZ, said on February 2 that at first sight some of the proposals evoke “satisfaction” but when they are considered more thoroughly they bring “a smile” and “if one goes into their details, then certain concerns”, the SITA newswire wrote.

Trade unions will now take some time to analyse the propositions.

"We have submitted the theses to our economic experts and analysts, who should analyse them by next Wednesday," KOZ spokesman Otto Ewiak told The Slovak Spectator.

Earlier in January the trade union confederation announced a petition drive under the banner “Preserving the Rights of Employees” and claimed that its proposals in the petition would bring steps that would ‘humanise’ the working environment: a 35-hour week – as opposed to the current 40 hours – without a reduction in pay as well as an overall limit on overtime work of 80 hours per calendar year.

“It is not economically sustainable,” Radičová said in response to those demands, as quoted by the SITA newswire. “There is a great probability that shortening the working week would automatically mean a reduction of income from work and we would not allow that risk.”

Ewiak told The Slovak Spectator in an earlier interview that the petition was a response to what unionists see as the “threat” of large-scale changes to the current Labour Code.

On February 1 approximately 250 people took part in a protest organised by KOVO against the proposed changes to the Labour Code in front of the Yazaki Wiring Technologies firm based in Michalovce. On February 3 one third of drivers of the Košice public transport company went on strike to protest against the changes in the Labour Code.

The leader of the opposition Smer party, Robert Fico, stated that the battle over the form of a revised Labour Code is central to his political party.

“This is as important for us as perhaps abortion is for the Christian Democrats,” Fico said on January 9 in an interview with SITA. “We will take a very principled stand behind the protection in the form of the Labour Code and we reject the interventions that the rightist government is talking about today.”

Jana Liptáková contributed to this report.