INCLUSION is one of the words that surfaces often during discussion with Trine Skymoen whenever she is asked to talk about the best traditions of her homeland. The Norwegian ambassador to Slovakia says that Norway is able to sit atop various human development indices because the Nordic social model is characterised by pulling all people inside society and leaving very few outside of its embrace. She believes that gender equality in Norway, for example, did not just happen – that the government as well as Norwegian women and men had to work hard to achieve this aspect of social inclusion. 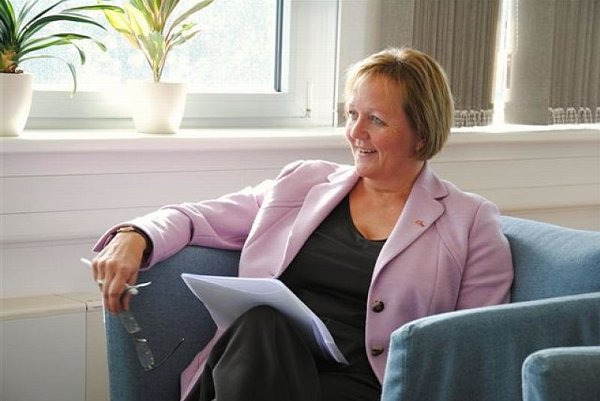 INCLUSION is one of the words that surfaces often during discussion with Trine Skymoen whenever she is asked to talk about the best traditions of her homeland. The Norwegian ambassador to Slovakia says that Norway is able to sit atop various human development indices because the Nordic social model is characterised by pulling all people inside society and leaving very few outside of its embrace. She believes that gender equality in Norway, for example, did not just happen – that the government as well as Norwegian women and men had to work hard to achieve this aspect of social inclusion.

The Slovak Spectator spoke to Ambassador Skymoen about gender equality, social dialogue, the recent visit of the Norwegian royal couple to Slovakia, and Norway’s support to preserve European cultural heritage, as well as about the significance of Norwegian Bjornstjerne Martinius Bjornson, the 1903 Nobel laureate in literature, who passionately supported cultural independence for Slovaks in 1907 and 1908.

The Slovak Spectator (TSS): According to a UN ranking, Norway is the world's top country in measures of quality of life. How has Norway achieved this?

I suppose it is the high standard of living, good education, a low unemployment rate and steady economic growth that has helped Norway to climb that high on the UN’s Human Development Index. Another reason is that the wealth of the country is accessible to the widest possible group of people. The Nordic model focuses on decreasing inequalities and sharing the country’s wealth, which I do not mean only in the material sense of the word.

TSS: Norway has progressed significantly in gender equality and presumably this is also part of the Nordic model of sharing. How has this happened?

To have a high standard of living it is important that men and women are able to equally access education and work opportunities – which mean equal access as part of society. And of course people who have equivalent access to society are happier than people who feel left out. The Nordic social welfare model itself is characterised by pulling all people inside and leaving very few behind.

But both our social welfare system and our gender equality are the result of political will. These things do not just happen. Someone has to make them happen and in Norway this political will to change was shared by consecutive governments.

Of course, both the social welfare model and gender equality call for an active approach. State policies are designed in a way to make it possible for both women and men to work and raise a family. By law all children have a right to attend kindergartens; the state does not pay for them but it makes sure that parents who want to have both work and family have the means to achieve that. This is one of the reasons why Norway has one of the highest rates of women’s participation in the labour force. We have quotas that suggest that political parties should have 40 percent women on their candidate lists to ensure women in local governments and the boards of publicly-listed companies must have 40 percent women. So the quotas help women to get there. It was very often the case that companies would say, ‘we want women in our company but we cannot find them’ or they have argued that women aren’t willing to take up higher positions. If a company must have women, they will find qualified women.

On one hand we focus on women so that they are able to participate on the same footing but on the other hand we also focus on getting more balance in the family sphere; but those are issues that the state cannot decide for families. For example, families have one year of paid parental leave and 12 weeks are reserved for men. However, if the father does not take his 12 weeks, it does not go to the mother. It is important that there are male role models who actually take this leave; in Norway we have many examples of men, for instance ministers in our government, who are on parental leave. Also, this is not something that only rich countries can afford because this also involves the necessity of using the potential of 50 percent of the population – women.

Again, it is a matter of inclusion and social dialogue. We have a very strong system of social dialogue that works at different levels which has contributed to the Norwegian economic success. For example, tripartite dialogue between the government, employers and trade unions works quite effectively and the three parties are able to work out compromise decisions on important issues. When we design a pension reform, we know that it has to be made in a way that it lasts beyond the next election or beyond the next leader of the trade unions.

TSS: Through grants from the Norwegian Financial Mechanism and the EEA Financial Mechanism your country is actively helping Slovakia to preserve its cultural heritage, such as works of art in our old mining town of Banská Štiavnica. Why does Norway support these activities?

Together with Iceland and Liechtenstein, Norway is providing €80 million to Slovakia for the upcoming period to spend on sectors which are important for the country as well as to Norway. Slovakia has a rich cultural heritage so we do support its preservation. By preserving the wedding palace in Bytča or the Executioner’s Flat in Košice or the Reduta in Bratislava we are preserving European history as well. The restoration of a historical water mill in Veľké Teriakovce was an initiative by two women, a mother and daughter, from a small village near Rimavská Sobota. Now the restored building serves as the local heritage museum. It did impress me that this was a local initiative; the women had the idea for the project and applied for the grant because they wanted to have the mill preserved. It is one of those small local projects that make a difference in the community while retaining an important part of their history.

I have tried to visit all the places where my country is involved but we have 100 individual projects, including environmental, cultural heritage and also renewable energy efforts, and it would be hardly possible to see them all.

TSS: A business delegation accompanied the Norwegian royal couple during their recent visit to Slovakia. What was the business focus? Where is the greatest potential for cooperation?

It was a rather large business delegation, including 70 people. It shows that Norwegian businesses are interested and perhaps more than a bit curious about Slovakia and its market. It involved different business areas: from tunnel construction up to renewable energy, the mapping industry and also companies interested in social responsibility. They represented quite a broad spectrum of the Norwegian economy. What is most important for Norwegian investors, or for any investor for that matter, is a stable business environment with no tolerance for corruption and a well-functioning judiciary so that you can trust that your investment would be handled in a fair way. We also held a seminar on corporate social responsibility that touched on these general issues.

TSS: What do you consider the most important outcome of the royal couple’s visit to Slovakia?

Then it is up to them whether something comes out of these commercial contacts. As for the royal couple’s impressions, they were very impressed with what they saw. When I was packing for Christmas and watching Norwegian television I realised that I had never before heard so much information about Slovakia on a Norwegian channel.

His Majesty also mentioned his trip to Slovakia in his New Year’s speech as well as mentioning the importance of Bjornson for the country.

A memorandum of understanding was also signed during the visit to define priorities for the use of EEA/Norway grants for the upcoming period: climate change, flood prevention, domestic violence, and continuing to preserve cultural heritage are among the priorities. We will also continue our scholarship programme and maintain cooperation over cross-border issues.

TSS: Tell us about Bjornstjerne Martinius Bjornson and what he has meant to relations between Norway and Slovakia?

Bjornson was a Nobel Prize laureate in literature and also a political activist and part of his activism 100 years ago was advocacy for Slovaks’ right to their own identity, language and culture. He fought for nations’ right to self-identity and what he stood for back then should inspire us even today. There is a Norwegian word to describe him: buldrebasse – meaning a big man with an impressive character and when he started speaking people were compelled to listen.

As he was a well-known writer he used this platform to advocate his political work. He and his personality resonated strongly throughout the royal visit and I think that even people in Norway rediscovered some aspects of his remarkable life’s work.